The Global Gaming Initiative wants gamers to do good by playing games. The for-profit company has created a mobile game called Sidekick Cycle where 50 percent of all in-app purchases are donated to charity. 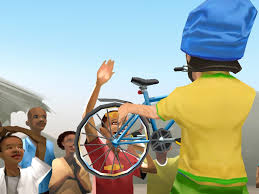 The startup is part of a movement, dubbed Games For Change, aimed at doing social good through games. It is one effort that could go a long way toward remaking the public image of games.

The game debuted in September, and the company is working with charities such as Africa’s World Bicycle Relief. Donations from gamers have led to 20 bikes donated so far, said Elizabeth Sarquis, founder and chief executive of the Minneapolis-based startup.

“Getting our first donation was a huge goal,” Sarquis said.”The question is, ‘Can you entertain people at the same time you are doing good?’ We feel good about the donations. Transportation is a huge barrier to education. So we looked at how we could help with bikes.”

It hasn’t been an easy road. Sarquis started the company three years ago and has funded it herself. She found a developer in Germany to make the Sidekick Cycle game, a variant of the endless runner genre. She said the team puts more emphasis on making its games fun, rather than emphasizing the charitable aspect. But gamers can feel good knowing their purchases go to a good cause. 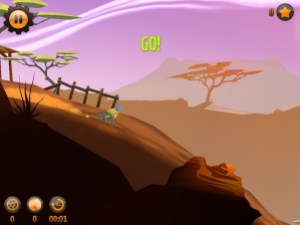 The first version started out as a premium title, where players pay upfront for the game. But Sarquis said she found that premium couldn’t compete with free-to-play, where players start playing the game for free but can pay real money for virtual goods.

The game has 36 levels. Each time you crash your bike, you have to wait for the timer to run out. You can cut that timer short by making a purchase.

The title isn’t showing up in the charts yet, and Sarquis wants to find partners who can help market the game. She is also locating more charities to work with GGI.

Sarquis likes the fact that bikes are tangible goods that can be tracked and verified when delivered to needy kids.

In 2014, Sarquis wants to publish more games, and she is looking for developers now. Her company has five employees in the U.S., and the German developer under contract has another seven employees. Sarquis said her plan is to spend $1 million in 2014 and raise another $500,000.

Sarquis is on the board of Games For Change. She said the movement is growing. Among those helping charities are Zynga.org, the charitable arm of social game maker Zynga; Grantoo, a multiplayer tournament company where players can make donations to charities; Half the Sky, which has created a game to build awareness about human trafficking; and Nicole Lazarro, who has created a game to help save the rainforests.

“So far, we are unique, and that makes it challenging,” Sarquis said. “But our momentum is growing. We want to teach a generation a different way of giving back.”