A lot of money is at stake in an industry that could hit $20 billion this year — Deer Hunter 2014 is No. 51 on the top-grossing games on Apple’s iTunes App Store, and Kill Shot is actually higher at No. 43.

“Kill Shot is effectively a complete ripoff of our game Deer Hunter 2014,” said Chris Akhavan, the president of publishing at San Francisco-based Glu Mobile, in an interview with GamesBeat. “The only difference is that in Kill Shot, you are shooting humans. In our game, you are shooting deer and other animals.”

In the lawsuit, Glu alleges that Hothead Games, based in Vancouver, Canada, copied things like Deer Hunter 2014’s marketing, tutorial, user interface, controls, virtual economy, pricing of items, and even some of its flaws. Akhavan noted, for instance, that a miscategorized assault rifle in Deer Hunter 2014 was also miscategorized in Kill Shot. Glu’s tutorial has 21 steps, of which Glu says Hothead copied 18. Many player reviewers mistake Glu Mobile as the publisher of Kill Shot because of the similarities, Akhavan said.

“They are a top-grossing game, so obviously their copying and cloning of our game has been successful,” Akhavan said.

In the games, you shoot targets. If a timer runs out, the targets will flee or engage. So the player has to make the kill in a single shot. The lawsuit says, “Kill Shot and Deer Hunter 2014 are virtual identical in every material respect other than the species of the prey.”

Kill Shot was published on Aug. 11, and it has risen up the charts worldwide, while Glu launched Deer Hunter 2014 in September 2013. Since you can shoot civilians in Kill Shot, Glu is also worried that the Hothead game could hurt Glu’s reputation as well.

Besides copyright infringement, Glu also claims “trade dress infringement,” which is a copying of the visual appearance of a product that creates consumer confusion, said Scott Leichtner, the vice president and general counsel at Glu, in an interview.

Akhavan said that Glu has not had an opportunity to investigate the underlying code of Kill Shot, or the source code, to see if that was directly lifted from Deer Hunter 2014. So far, Glu is not alleging that. Rather, Glu alleges that Hothead “reskinned” the game to such a degree that the gameplay is essentially the same while the images look different.

To help with the case, Glu has hired Jennifer Lloyd Kelly, a lawyer who also handled the case when King, publisher of Candy Crush Saga, sued 6waves in 2013 over a separate game copyright infringement case.

“We think they spent months replicating our game,” Akhavan said. “We have never initiated a lawsuit like this, and have never seen anything on this scale. We are also puzzled why they chose to go this route. It’s shocking how they went about it.” 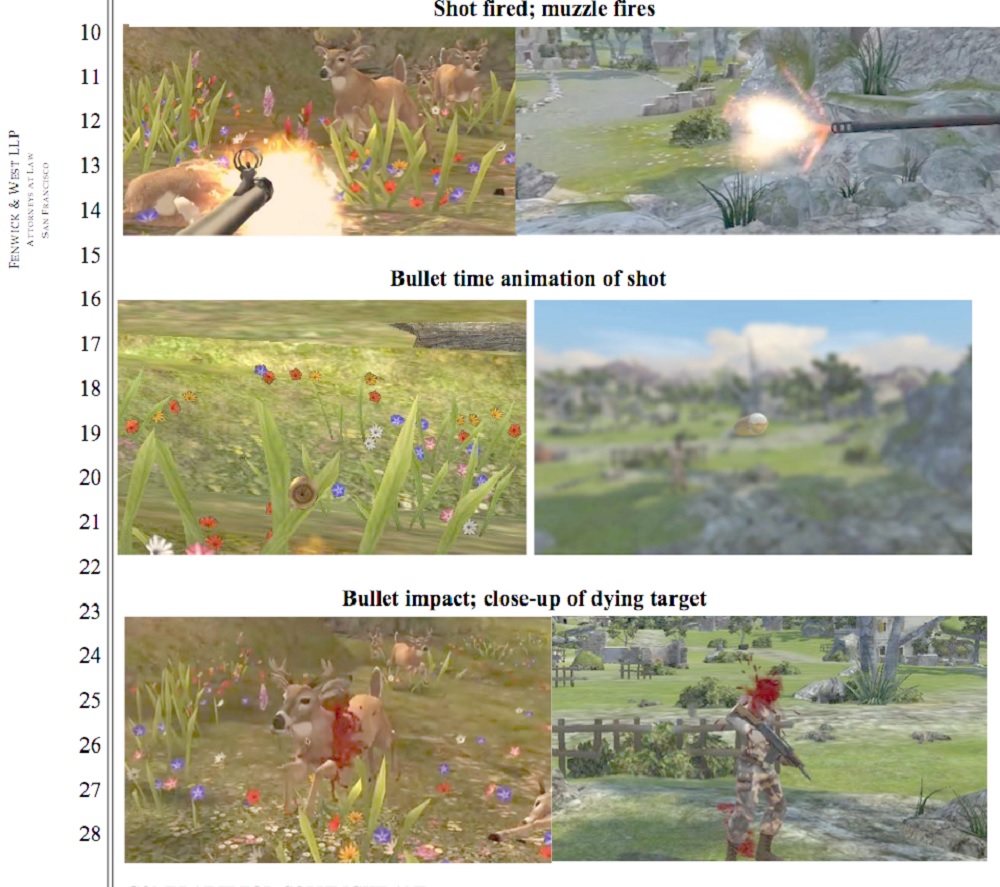