Glu Mobile is launching its long-touted Katy Perry Pop mobile game today as it aspires to cash in on the celebrity gaming trend that it lit on fire with its Kim Kardashian: Hollywood game.

The title is an always-connected, massively multiplayer online mobile game based on the life of pop star Katy Perry. In the game, you play an aspiring music artist in Santa Barbara, Calif., (Perry’s hometown) and try to advance your career in the global music scene.

Niccolo De Masi, chief executive of Glu, said in an interview with GamesBeat, said, “The game is about how you make decisions and progress through life in the music industry. It has a lot more social functionality in it than our Kim Kardashian: Hollywood title.”

The game is timing to coincide with the end of Perry’s global concert tour. That means that Perry herself, who commissioned the game directly in a deal with Glu, will engage with fans of the game. Perry has more than 200 million social followers, who will be the natural target audience.

In the game, you’ll tour the country and travel the world, meeting a cast of crazy characters in the music business. You have to build your fan base, much as you build your fame in the Kardashian game. Glu launched the deal with Perry in the wake of the success of the game with Kardashian, who has collected more than $130 million in royalties from the game.

The title is a 2D, cartoon-style role-playing game where the player charts a course for music stardom. You can record songs, film music videos, and perform for fans. You can customize your look and pop star persona, and see the world through Perry’s eyes via a Katy Vision feature.

“It has innovative features like synchronous chat and a live news feed,” De Masi said. “Katy can broadcast to the entire audience via a news feed.” 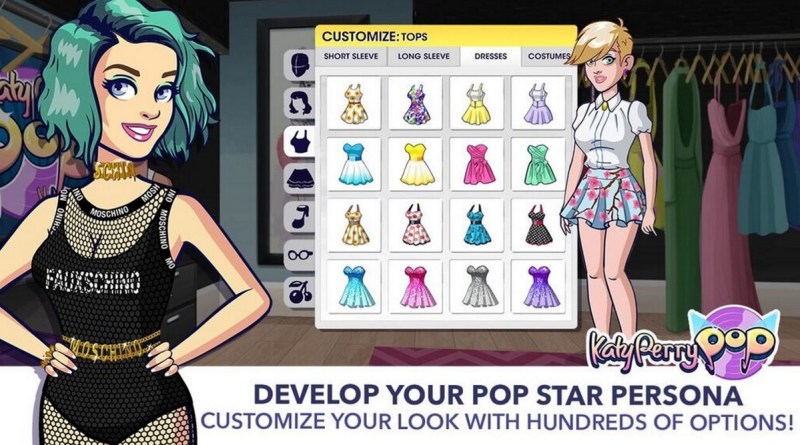 Above: You can develop your own pop-star identity in Katy Perry Pop.

About two or three dozen developers worked on the title in Long Beach, Calif., for about a year. The game was made by the same team that created Racing Rivals for Glu. That title had server-side capability and allowed for frequent updates. That’s what De Masi has in mind for Katy Perry Pop.

“We are producing a game that can be updated frequently over the years,” De Masi said. “It goes wherever she goes. It’s about her, not just her music. It’s about being in her world and learning the ropes of the music industry.”

De Masi said that Perry did numerous video shoots and voiceovers for the game. He said he was amazed at the energy she brings with things such as rapid costume changes, just as she does in her concerts.

“We want to be the Universal Music of gaming,” De Masi said. 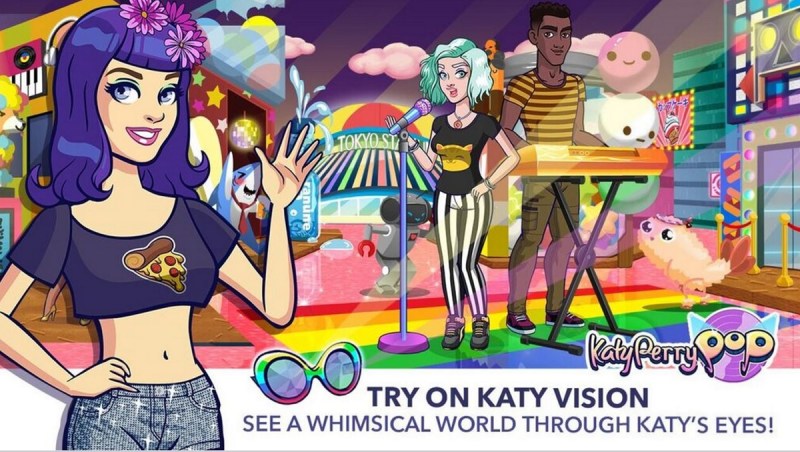 Above: Katy Perry Pop lets you see the music world through the pop star’s eyes.