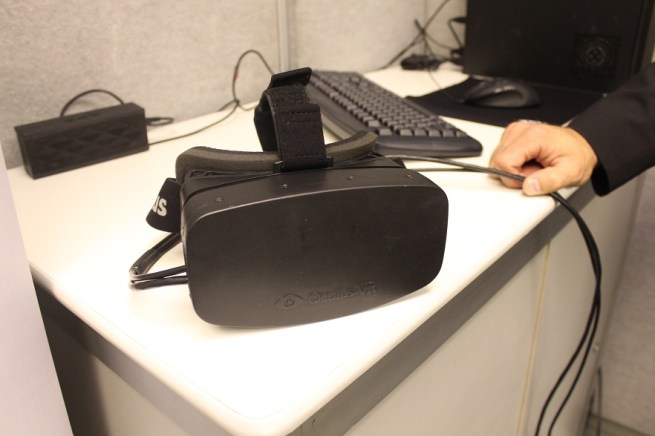 LOS ANGELES — Imagine if you could use the Oculus Rift virtual-reality headset for more than just fragging enemies in the latest first-person shooter. The device’s makers want you to do just that. They see the Rift as a gateway to new immersive experiences, many of which go beyond the gaming space.

GamesBeat recently checked out the latest prototype of Oculus’ buzz-building wonder goggles — now featuring a fresh-from-the-factory 1080p panel — at the 2013 Electronic Entertainment Expo. In addition to an impressive Unreal Engine 4 tech snippet, I also tried out a “VR cinema” demo that placed us in a theater, complete with seats, screen, and a movie trailer to watch. I was able to look around the space, which even included a flickering projector directly behind us.

“[The Rift] really can expand far beyond [gaming],” said Brendan Iribe, Oculus VR’s chief executive officer. “You could imagine you’re watching a movie in this theater. You can have your buddies in there. You guys could be talking to each other. You could be doing things,” he continued.

Our conversation quickly moved to other applications. “You’re going to have medical simulation apps. … Military people have contacted us,” Iribe added. “Architecture … never before has an architect been able to build something on a computer and then look at it in the exact real scale it is.”

The Rift opens up new opportunities for creative companies seeking to showcase their products and services. Interactive VR experiences could replace car brochures, for example.

“We’ve been talking to one of my favorite car companies. … They’re looking at making all kinds of virtual experiences where you could potentially see a car before you buy it. You could look at the interior. Maybe you can style it. … You could have a VR driving experience,” Iribe said. “The car company … can model out and build out that experience.”

“This goes far beyond gaming, and that’s something we’re really excited about,” Iribe concluded.