Independent development is a scary thing. You don’t have the financial cushion of a large company to fall back on. Sometimes, you don’t even know when your game is coming out, and, assuming if anyone buys it, you’re not getting paid until it does. Yet despite all the uncertainty, many people still choose to go indie full-time … so I decided to find out why.

Back in May, a few local developers showed off their work-in-progress games at the first Indie Press Day in San Francisco. Held during a rainy evening, Indie Press Day organized 16 indies and as many plastic tables into a narrow row at a small coworking space. Nothing flashy or distracting was there, just the games and their very approachable developers. While each title on display had its own charm and ingenuity, what impressed me the most was just how many of the folks there used to work at large, well-known companies before taking the indie-game plunge.

The individuals I spoke with all had their own reasons for leaving their day jobs, but one common thread among them is that they all left voluntarily, an interesting (and fortunate) circumstance given the amount of layoffs that hit the industry seemingly every week. I also asked them a bit about their upcoming games, any unexpected challenges they’re facing from switching to indie development, and what they think about the thriving sector of indie games and the people behind them. 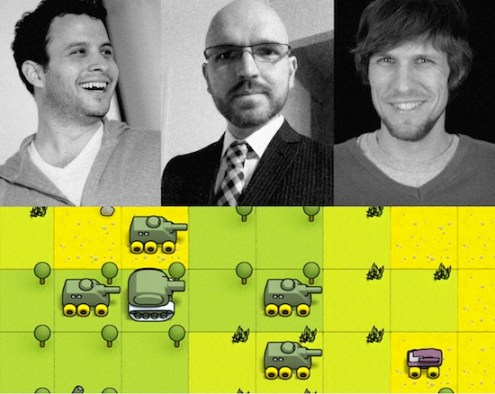 In his decade-long career in the games industry at companies like Pandemic Studios and Electronic Arts, Ethan Levy has occupied a variety of roles: intern, lead tester, programmer, game designer, producer, and consultant. But the most direct influence for Quarter Spiral came from Levy’s time at BioWare Social where he worked on the browser-based games Dragon Age Legends, Dragon Age Journeys, and Dragon Age Legends: Remix 01.

“What appealed to me about [BioWare Social] was that it was very entrepreneurial,” Levy said. “It was sort of like being in a startup within EA. I had a lot of room for growth and to try new things — to do experimental things. That’s how I met Alex [Kohlhofer], one of my two co-founders at Quarter Spiral.”

After key members of the team left BioWare to co-found their own startups — leaving Levy, Kohlhofer, and another employee in charge — Levy began to lose interest.

“Over the course of six to nine months, I started to feel a lot less like I was an entrepreneur,” Levy said. “I started to feel a lot more like I worked at the EA that people imagine EA is like. It just felt like it was time for a change, I guess. I wanted the freedom and exhilaration and all the challenges that were part of the early days of BioWare Social and not to feel like I was endlessly going to meetings and politicking and managing. … I just wanted to feel like I was making games again.”

Both Kohlhofer and Levy left BioWare around the same time. Shortly after that, they picked up Thorben Schröder as a back-end developer and formed Quarter Spiral.

Enhanced Wars owes a lot to Nintendo’s Advanced Wars, a series of handheld games that focuses on turn-based tactical combat. But instead of trying to develop a robust single-player campaign in the vein of Advance Wars, Levy says they want to deliver a “a multiplayer focused, turn-based strategy game that really overcomes some of the design foibles of your Advance Wars-style games.”

“A lot of turn-based strategy games and even real-time strategy games — if you have the reflexes to play them, which I don’t — are about kind of getting a small resource advantage over your opponent and then overwhelming them slowly with forces,” Levy said. “It’s really fun for both players for a short build-up phase. But then relatively quickly, one player gains an advantage that can’t be overcome. And then there’s kind of a long, boring mop-up phase.”

In order to avoid that last part, Quarter Spiral plans to design Enhanced Wars for “fast and aggressive” battles with a lot of “emotional volatility” for players. But it’s still far from being complete — the version shown at Indie Press Day was only a month old. Later this fall, the company will launch a crowdfunding campaign for Enhanced Wars on Kickstarter. For now, the target platforms are PC, Mac, and Linux. 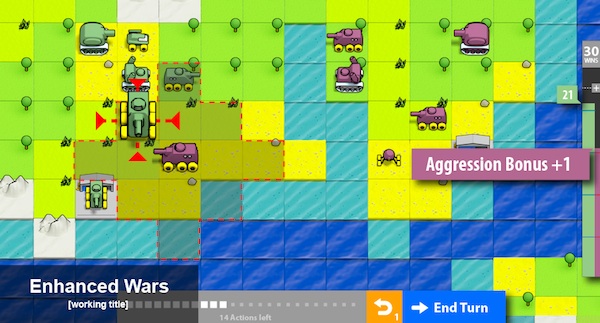 Above: At Indie Press Day, Enhanced Wars lacked any sort of sound or animation. But the basic turn-based mechanics were there.

“I don’t know if I’ll be able to pay my rent [laughs],” Levy said. “At EA, your project might get canceled, but you’d still get your paycheck. Whereas here, there’s a very real possibility that our company will go bankrupt and then we’ll have to get real jobs. Dealing with that level of uncertainty is really hard.

“Just to give you some perspective on where my life is: I just got engaged. My fiancé and I are thinking of moving to North Carolina, but she wants to stay out here for work, and trying to do long-term planning is impossible for us right now because I literally have no idea whether three months from now [or] six months from now I’ll be at GDC [editor’s note: Game Developer’s Conference] trying to hunt down that next job. Or whether Quarter Spiral will be self-supporting, and we’ll be able to move to North Carolina whenever we want to.”

“I think indie games will play a bigger role in the next generation of consoles,” Levy said. “And the reason I think that is almost purely market dynamics. Like when a huge investment in Tomb Raider and millions of sales are only barely making a profit, the business models of those large publishers are — it’s really tough for them to make a profit with these giant teams and these giant games. That leads to studio closures and layoffs. Studio closures and layoffs don’t turn into people joining as many new studios as it used to. It turns to people founding their own studios … .

“I think that [for] a lot of people who are either choosing to leave corporate game development, like I did, or being forced to leave, going indie is a huge draw. Just look at how much money the guys making The Banner Saga raised with beautiful art, great team pedigree, and great vision. And now they’re developing the game they want to make instead of sitting in meetings or being handed design documents about the game they have to make.”