Daniel Dilallo was back at the Game Developers Conference a couple of weeks ago, but it wasn’t to show off a new Guitar Hero and Call of Duty game. Rather, the former game developer was at the Gold Club SF, a “gentlemen’s club,” to show off his new virtual reality app for the strip club, Gold Club SF VR.

The idea is to bring the immersive experience of the gentlemen’s club into the privacy of your own home. The app is available in beta form now, and it debuts later this year. Dilallo hopes to use it as a springboard for bringing many other strip clubs into VR.

“People ask why you wouldn’t go to a real club instead of going to a VR club,” Dilallo said in an interview with GamesBeat at a VIP booth in the club, with loud music blaring in the background. “But you can’t always get to a club. And you can’t get as interactive as this in a real club.”

“I think the VR industry is only going to grow with adult entertainment,” said Reya Sunshine, an adult performer and one of the models in the Gold Club SF VR app, in an interview. “It’s only up from here.” 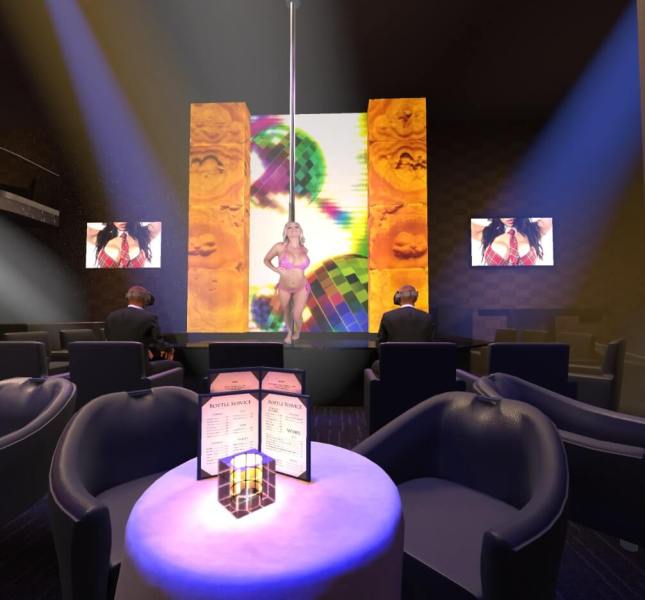 Above: The Gold Club SF reproduced in VR.

“With virtual reality, we recognized a golden opportunity to deliver our highly rated entertainment experience to the comfort of your living room,” said Craig Bordeau, general manager of Gold Club SF.

“We took the footage to real-estate 3D artists and gave it to them, and they made it look like the real thing,” Dilallo said.

Once the app formally launches, you’ll pay for an upgraded experience. You will be able to purchase special privileges while inside the club for additional money. You can buy credits for solo lap dances, mimicking everything that happens in a real strip club “but at a fraction of the price.” 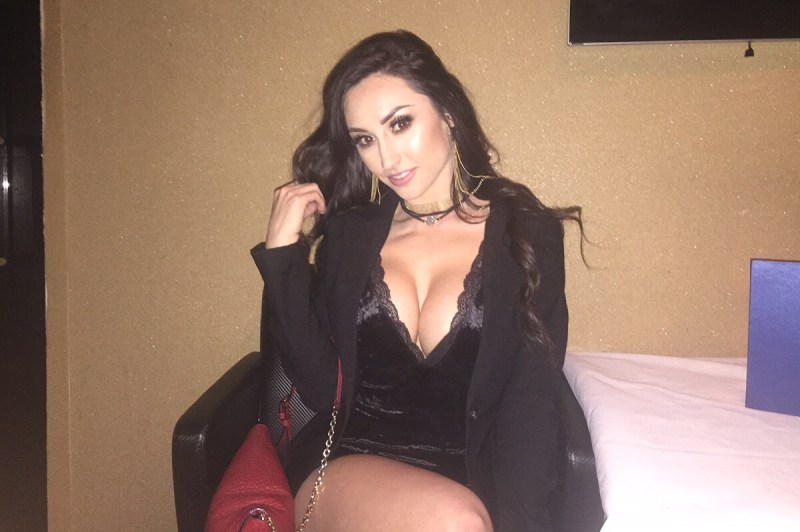 Above: Alexis Sunshine, a performer in Gold Club SF VR.

“Reya gives you a dance, and she goes from bikini to topless to fully nude,” Dilallo said. “You can buy dances for your buddy. You can be a VIP player and get free admission for you and a couple of guests. She’s giving you a sign to tip her. You make it rain, and now, you’re good to go.”

The app will launch in an R-rated version for more mainstream VR platforms. There’s also a topless version and a fully nude version. It will be available on the Oculus Rift, HTC Vive, and on the PC as a free download (for now) at VRClubz.com.

“We believe we’ve got the right direction with the animation-based filming approach,” Dilallo said. “We know where the user is looking; 360 video isn’t cutting it. They don’t know what the user is doing. They don’t know if the user is reaching out. Ours adds a whole new level to the experience by adding the interactivity of a game.”

Dilallo’s company is now trying to partner with other big strip clubs around the country to do more localized versions of the strip club app. He’s expecting to be able to do a lot more versions of it.

She has dabbled in 360 video already, but she was impressed with Dilallo’s production with multiple cameras. You can double up with two girls or three girls in a room if you want, she said. 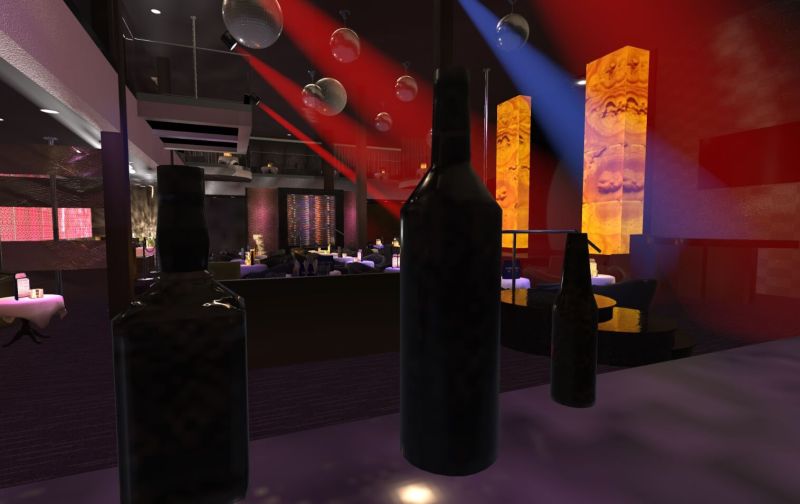 Above: The Gold Club SF remade in VR.

Dilallo spent years working on the visual technology, which blends a film-like image of a woman with the animated backgrounds that replicate the look of the real club.

So, Dilallo had to think hard about what to do next.

He added, “The team was very valuable. Four highly trained developers could do the work of 20. But, I couldn’t keep them working in that medical space. I started taking one VR project after another — from Lamborghini to Playboy. I made a little money from random development stuff in VR marketing. We were just getting by, and the space that was moving the quickest was the adult space. The adult space drives technology, and I am a direct witness to that.” 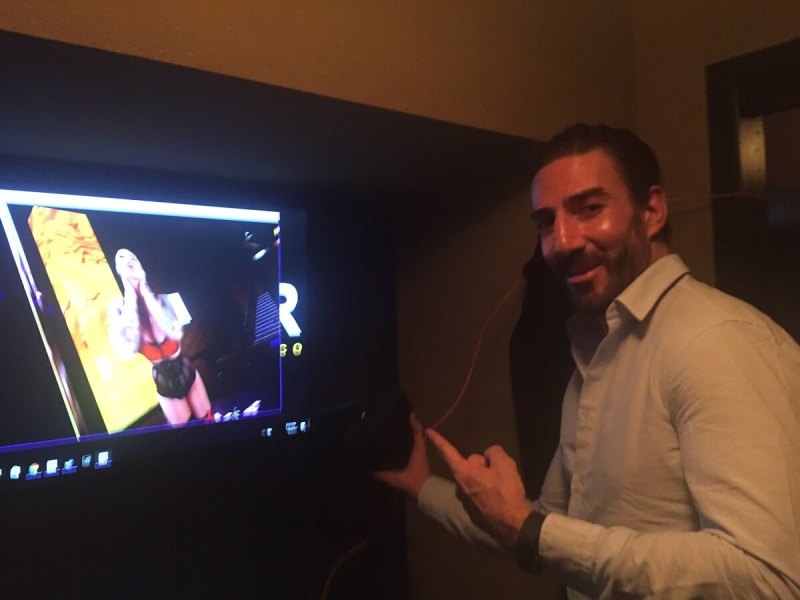 Dilallo started out as a tester at Acclaim Entertainment for about a year and a half. Then, he went to college at Full Sail University in Winter Park, Florida, where he got a computer engineering degree. He went straight to a job at Activision at a studio in Albany, N.Y., where he worked as a mission designer for an Amazing Spider-Man video game.

He worked under the umbrella of Vicarious Visions, an Activision-owned studio, from 2006 to 2011. He went on to work on tools for Guitar Hero III and audio design on Marvel Ultimate Alliance 2. He did game design on Spyro and then shifted to the innovations lab, where he worked on two Call of Duty and Guitar Hero prototypes. He even worked on a game he proposed dubbed Call of Duty: Roman Wars.

Dilallo looked at his options and grew excited about a new area of video games: virtual reality. After the Oculus Rift bubbled up in 2013 and Oculus VR issued its development kit (DK1), Dilallo checked it out. 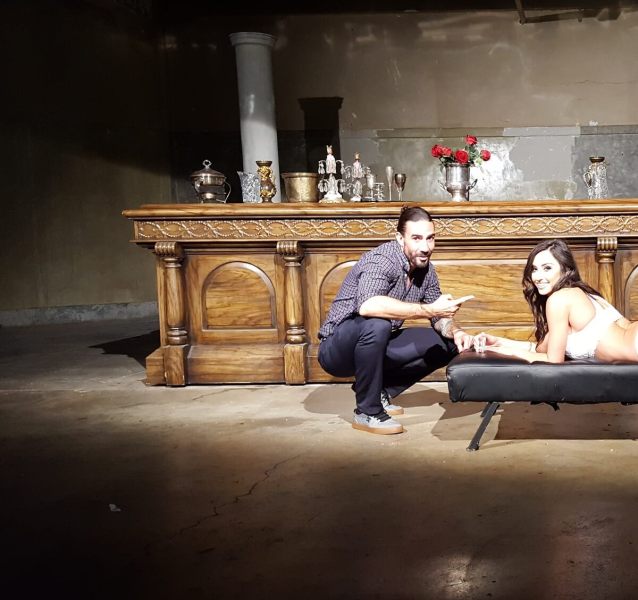 Above: Daniel Dilallo with Reya Sunshine on set at The Armory.

“The adult space would be where I could support the team and eventually go mainstream,” he said. “We are a young company with shoestring budgets, without venture capitalists behind us. So, we moved into the adult space.”