Most of you will look at the images on this page and think, “Not for me.” And that’s OK with the developers at Harebrained Schemes, makers of the recent Shadowrun games for PC.

The studio’s upcoming release, Golem Arcana, features physical, collectible toy figures that work in conjunction with a digital video game. That may sound very similar to the concept behind the super-selling Skylanders series by Activision, but no one’s expecting that same level of retail success. While Harebrained would never turn away fat wads of big bills like that, they’re simply realistic about whom their game appeals to. “We’re targeting more the specialty market,” Ray Winninger, executive producer, told GamesBeat. “A little more deep gamer-gamer type folks. That’s where our roots are, that’s where we come from, and that’s what we’re doing.”

In other words, Golem Arcana is for serious nerds — the hardcore types who look at the images on this page and think, “I’ve got to get me some of this.” Those who simply peep these painted models and know that they have to prepare their wallets.

Are you one of those folks? Here’s what you — and your wallet — need to know for this August 13 iOS and Android release. 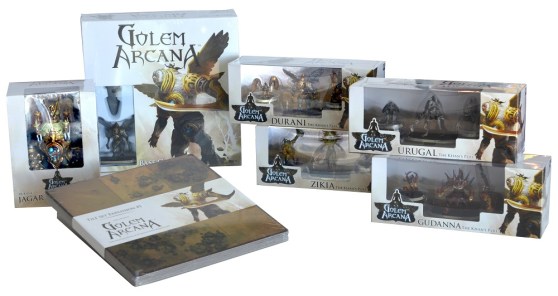 Above: Some of the stuff you’ll be able to buy for Golem Arcana. The base set is that tall box toward the left.

The base game will cost $80

You have to start with the base set before you consider anything else below, and that will set you back $80 on its own. That’s quite the price tag considering the actual digital application is completely free to download — you’re paying for all physical goods here. On the other hand, you’re getting a lot in this box: six pre-painted figures (three for each side in this two-player, head-to-head game), a card for each unit with corresponding stats and available attacks, six double-sided modular map tiles, two 10-sided dice, a special stylus specific to this game, and other accessories.

To understand what you’re paying for, you have to understand how Golem Arcana works. This isn’t exactly like Skylanders, where you buy a real-world toy, then have it digitally transformed into a playable avatar inside the video game. Instead, you’re mainly interacting with the physical pieces set out on the table in front of you and using the stylus to touch them to relay certain information (via Bluetooth) to your smartphone or tablet. “We love Skylanders,” said Winninger. “The difference for us is that Skylanders gets a little too device-focused as opposed to physical-focused. We’re trying to keep the attention [on the tabletop] for that social experience.”

To give a Golem (the giant constructs that battle in this world) its marching orders, for example, you might touch its figure with the stylus then touch the part of the map that you want to move it to. Then while you move the physical piece, the digital game will already know that unit’s new position. To attack, you touch the attacker then the defender. To pick a specific power or move, you can touch the corresponding symbol on that unit’s associated card.

Pretty much everything important on the table is covered in hundreds of microscopic magnetic dots, and the stylus is pulling game information from them and relaying it to the paired smartphone or tablet. Then the digital game will sort out all the “crunchy” parts for the players — line of sight, attack chance, defense, damage, terrain effects, area of effect, etc. — then show the aftermath.

As a result, you get a turn-based tactical game (think Warhammer in the tabletop world or Final Fantasy Tactics in video games), with physical pieces to please that nerd side in you (you know what side we’re talking about) and a digital component to calculate all the boring stuff. “The app acts as a referee,” said Winninger.

But isn’t this all a little … superficial? Sure, pre-painted figures are cool and all, but in Golem Arcana, they are more or less physical manifestations of something the video game half can handle just fine on its own. “If we’re all sitting on a couch playing a video game together,” explains Winninger, “oftentimes, we’re not interacting with each other. We’re usually focused on the screen. A board game like this, however — we’re chatting, we’re cross talking, we’re talking about what’s going on in our lives — all in addition to playing the game. It’s inherently a different type of social interaction. And our fans who get into these sorts of games — there’s just something fun and impressive about seeing real, physical armies of Golems facing off against each other on the tabletop.”

Above: One of the expansions featuring a new faction.

Maybe you’ve bought into the idea, and you’ve convinced yourself that the base box is enough. After all, it contains everything you need to play full sessions, and Harebrained will be regularly releasing free new scenarios to download.

But let’s face it: Those new Golems sitting in these expansions would look awfully good in your collection.

These separately sold kits will come with three Golems, their associated cards, plus relics — magical artifacts (also represented by stylus-activated cards) that offer special powers like a Tree of Life that heals or a Bone Gate Totem that can resurrect and control the dead.

Individual models, including the $65 Colossus

Harebrained will be offering limited-edition Golem figures on its website for serious collectors.

Another potential wallet-buster is the football-sized Colossus pictured here: 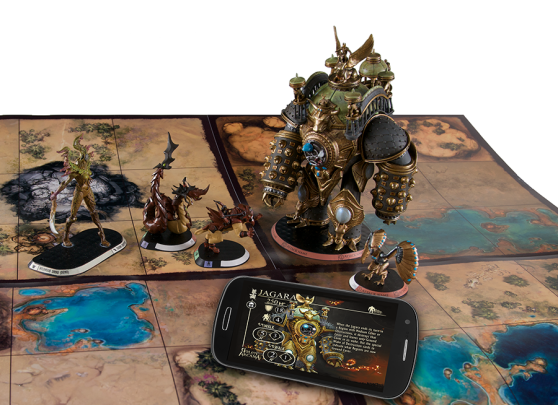 Above: The mighty Jagara Colossus.

Normal Golems seat one pilot, called a Knight (more on those in a bit). This massive Colossus seats three Knights, fills up an entire map square by itself, and makes collectors feel all tingly inside. They will also come with some supersized Relics, plus some “Wake of Destruction” effect cards.

Almost everything you can buy for Golem Arcana will come with digital-only Knights, the pilots who drive the machines on the battlefield. Within the video game portion, you attach these to the Golems, modifying their characteristics. “In game terms, think of pilots as Golem loadouts,” said Winninger.

The base game will come with approximately 70 Knights. Not enough? You’ll be able to download more for about a buck each.

As you battle, you build up a resource called mana. (To help the losing side stay competitive, downed Golems will release a burst of mana as well.) You spend this to summon godlike Ancient Ones — think of them as epic spells that can affect everything on the field, including the terrain itself.

The base game will also come with a few of these virtual powers, but you’ll be able to download more for $1 each.

These are the same pieces that come with the base set, for those who want grander battlefields (and have extraordinarily large tables at home).

How about buying all that … twice?

You can — and should — play Golem Arcana locally, facing your opponent across the table (social interaction, remember?). But if you really wanted to, you can play with an online friend in the same way that you might both play long-distance, physical chess like you see in the movies.

Each player would need the same board and Golem setups, and when one moves a piece, the other will have to mirror everything on the other side. But the digital portion of the game will keep track of everything, relaying the proper info to both players. (You can also do this locally, in case you don’t want to share one iPad screen with the other guy for whatever reason.)

This doesn’t seem very practical, and Harebrained isn’t really pushing it, but the option will be there if you want it. After all, what’s another couple of hundred dollars between friends?