Golf Story is not like actual golf. Real golf taxes your emotions. Chipping in a shot from some godforsaken bunker can feel like a star exploding in your chest. Driving a shot onto the green, watching your ball grace the lip of the cup, only to watch it spin cruelly away can blind you with such frothing rage you’ll shatter your club against a tree. Sidebar Games’ role-playing game is, frankly, too dang chill to plumb those depths. This game is mellow every step of the way, its all encompassing light vibe making missed shots barely sting. Even bizarre, silly scenarios like pitching flaming golf balls into frozen golfers seem downright normal.

More than anything, Golf Story invokes the feeling of playing an old-school Japanese role-playing game on Game Boy Advance, such as Nintendo’s own much-missed Mario Golf, with the relaxed commentary of televised golf on in the background on a lazy Sunday afternoon. Its buttery calm pulls you into a pleasant rhythm of golfing, puzzle-solving, and fetch-questing. It has almost no massive emotional, narrative, or challenge peaks; rather, it’s a slope of rising action as smooth as the best putting green.

It is without question one of the best games yet for Nintendo Switch. 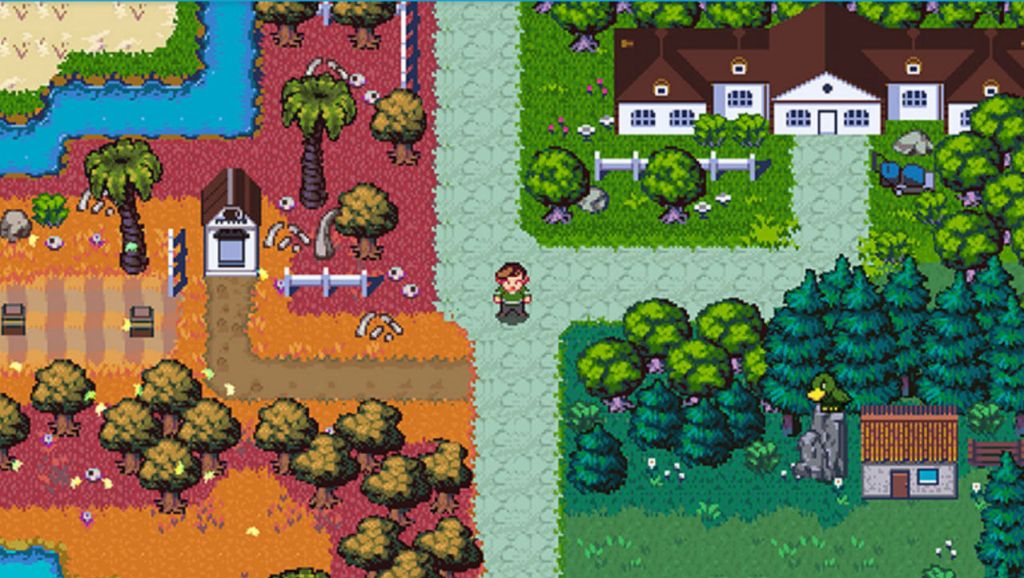 It’s all right there in the name

Unlike the modern indie RPGs that ape the visual and aural motifs of the Super Nintendo, mistakenly layering on thick smears of dialogue and drawn out tutorials, Golf Story trusts the player to get into it, wasting no time getting to the golf or the story. Moments after starting, you’re in control of the hero as a boy when he’s out learning the basics with his father. Drives, chips, putts, and some skewed humor—for some reason geese keep showing up to watch you learn your clubs—and you’re into the main game within a few minutes.

That Golf Story is so breezy about its basics masks how its disparate parts work in concert. By the time you’re exploring the first of the game’s eight courses—each area has a hub full of side-quests and mini-challenges in addition to a larger 9-hole course you play through before moving on in the story—the basic rhythm of dialogue, golfing, and exploring from those opening moments has seamlessly expanded into a richer, funnier game that only gets more pleasurably weird as it goes on.

Take Wellspring Grove, the first course where you begin your journey to become a golfing pro. Wandering the small but detailed hub about the size of a town in classic Pokémon game, you’ll pick up little quests that both teach you subtle golfing techniques and lead you into more bite-size story tributaries. Finding a coach and gaining membership to the club is the ultimate goal, yes, but on the way to finding it, you’ll run across hidden switches in the grounds that open up a hidden mini-golf course. You’ll also meet a group of punk rockers obsessed with disc golf (do not call it Frisbee golf) and you’ll have to learn the ways of the disc to move on. This core rhythm carries through the games 15 to 20 hours but never gets stale because of rich aesthetic variety. Wellspring gives way to a caveman-and-tarpit-themed course, a beach, and even weirder fare like a forest haunted by evil wizards and skeleton minions. It’s all of a goofy piece, too, never breaking from its bemused tone. Even when a werewolf breaks up a fancy dinner party at the oldster Tidy Park course, it feels right. 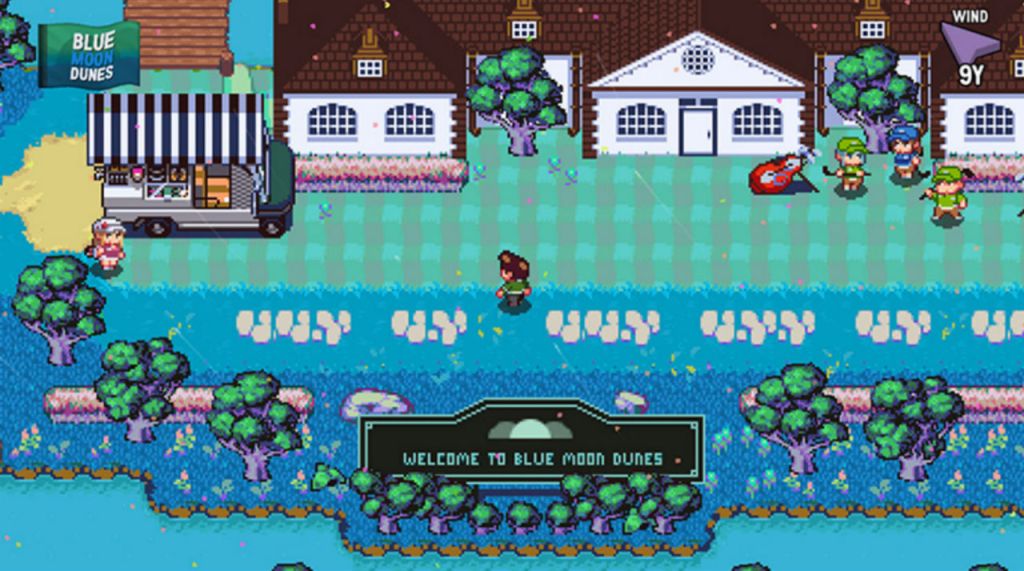 Also to Golf Story’s credit, the golf itself is tight. Borrowing the swing setup of games like Hot Shots Golf, you choose your club, refine where you want the ball to land by pressing a button to adjust the shot and spin, and then press a button three times to make your shot — once to begin you swing, again to set your power as an indicator at the bottom of the screen slides along a meter, and a third time when the icon comes back down to strike the ball. It’s a satisfying exercise in precision timing that’s worked well in other golf games and feels just right here.

The best part of the golf in Sidebar’s game, though, is that it’s the solution to almost every problem you run into. At any time while exploring the course hubs (with rare exceptions), you can drop a ball on the ground and hit it where it needs to go. Sometimes it’s a banking a shot onto a floating island you can’t walk to so you can sink it in a hole for bonus experience points. Other times it’s slapping beach balls into a crab so he’ll pop them like a pal. It even gussies up the otherwise typical golf courses when you play each area’s nine holes. Each one has regional monsters. The spooky course has ball-devouring blood gators, the mountain course has birds that will carry your ball into the rough, etc. Role-playing games traditionally abstract and exaggerate physical activity–sword fights, exploring a mountain, etc.–to give you a more cerebral, story-centric experience. Golf Story’s approach is to posit a world so entrenched in golfing–recognizable, mundane, pro shop golfing–that it infiltrates everything you do but then makes the regular golfing just a little bit weird. It’s precisely what you’d imagine if you think “golf RPG.”

It’s never bombastic, though. The cumulative effect of all this is an overwhelming relaxing game that just feels smooth and respectful of your time. Even if you shoot a bad game in one of the three big tournaments bookending the game’s three act structure, it doesn’t take much more than 20 minutes to play through the full nine holes. Mistakes are easy to correct, quests are easy to find, experience and items are doled out consistently and clearly.

What do you want from me?

There are only two flaws hamper Golf Story. The first is that it’s often difficult to understand putting greens. While other golf games like Hot Shots Golf will have some kind of graphical overlay to demonstrate how strong a slope or curve in the green is, Golf Story only has an arrow in the corner of its heads-up display and a vague descriptor. A light arrow with the word medium will let you know there is indeed a slope to the green, but until you actually putt, there’s no way at all to tell for sure. It’s often easier to just chip the ball in with a wedge. That it’s more fun to chip in and that most putting greens aren’t strongly sloped is besides the point–there should be a better explanation onscreen.

That extends to some side-quests too. While Golf Story’s economically minded pace and script make for a more enjoyable game, it also obscures some of its goals. It’s easy to misunderstand how to feed fish at their tarpits or how to actually use a putting green so you can knock a book off a bookshelf late in the game since the game inconsistently spells out what you need to do. Most of the time, this is a good thing. It’s more fun to intuit what you need to do than to stare at a box of text. But like the putting greens, sometimes there just isn’t enough information.

Those nitpicks don’t take away from the overall pleasure of Golf Story, though. By the time I reached the final course, a full-fledged pro who’d hung out with ball-stealing moles and rap battling octogenarians who insist on putting every shot across a course, those two little problems had faded away like the hours that drifted by as I just kept playing. That this is Sidebar Games’ first major release is remarkable. Golf Story is confident, smooth, and its lighter than light approach to everything from art to humor to play is perfectly matched with the Switch’s play anytime, anywhere form factor. Forget the agony and ecstasy of real golf. This is a really good time.

Golf Story is out on Nintendo Switch. Sidebar Games sent us a code for this review.