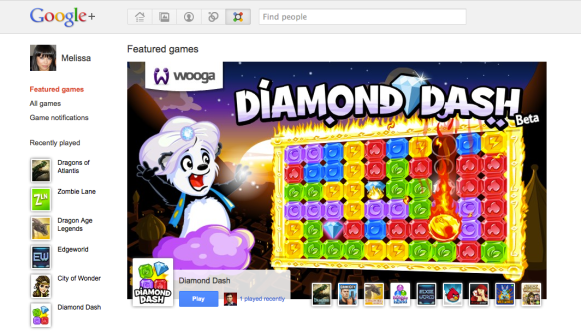 The company is rolling out the games to its Google+ users gradually, who will see the games as an added button next to their profile, and as circle buttons on top of their main Google+ stream. Games are one piece of the missing puzzle Google needed to successfully compete with social networking titan Facebook, which features dozens of incredibly popular games like Cityville and Empires & Allies.

“Today we’re starting to gradually roll out games in Google+,” Google senior vice president of engineering Vic Gundotra wrote. “We look forward to making them fully available to everyone in Google+ soon.”

Zynga has built its business on social games on Facebook, and it currently has more than 250 million monthly active users, according to AppData. The company has been so successful that it recently filed to go public and raise up to $1 billion, and it made $90 million in income last year. Part of Zynga’s success comes from its ability to promote games virally through notifications — something Google appears to be shying away from.

“If you’re not interested in games, it’s easy to ignore them,” Gundotra wrote. “Your stream will remain focused on conversations with the people you care about.”

Google’s social network attracted a reported 20 million visitors shortly after it launched in June. While it doesn’t compare to Facebook’s staggering 750 million users or Twitter’s sizable 200 million users, those networks have been around much longer.