Two weeks ago Google announced the first-round winners of its two-round Android Developer Challenge (ADC). The contest, which is promising a total of $10 million in prize money, is intended to entice developers to come up with exciting new applications for the company’s mobile Internet platform, Android, which is clearly important to Google’s future (chief executive Eric Schmidt says the mobile web will be bigger than the PC Web within a “few years”).

Openness and flexibility
As it turns out, the winners we spoke to have quite a diverse background in mobile development. About half of them had never done mobile development before and so their impressions of Android were not quite as enthusiastic as with those who’d already finished projects on other platforms.

However, among developers who did have previous experience on other platforms, the concensus seems to be that Android is the best they’ve seen so far. Why? The main reason they gave us is that Android is extremely open and flexible. Part of that openness is attributable to Android being open source, which is an advantage both for hardware vendors and third-party developers, who’ll be able to better see what’s going wrong if an error occurs while developing their application. Another part of the openness is that Google is expected to allow third-party developers to distribute their apps across various platforms and carriers rather than requiring any kind of exclusivity. Says Joerg Hildebrand from developer Cityslikkers, “In contrast to Symbian, we don’t have to beg to run software on a specific phone.”

The flexibility winners talked about is the ability to replace core applications. The contestants from Phonebook2.0 did exactly this. “It really allows to do complicated things easily such as replacing a core component such as the call logs application or the address book. This isn’t possible on Windows Mobile for instance,” they said. This same functionality is the justification AT&T Mobility cited as its reason for rethinking its position toward Android.

Development costs
We asked some of the winning developers to rate the costs of developing on Android, since with multiple platforms in the market, developers will have to pick and choose where to invest their efforts. Android already includes quite an impressive set of tools that let developers advance relatively quickly: support for the Eclipse IDE, an advanced emulator and a subset of the Java programming language as frontend for its natively developed Dalvik virtual machine.

Another factor developers commented on was the time it took to complete a project on the platform. Cityslikkers’ Hildebrand said that “in comparison to all other platforms, you experience a lot of freedom which helps to keep the motivation high.” And Florent Stroppa from Voxmobili compared Android to the iPhone, which uses Objective-C and the Symbian platform, which is usually used in combination with C++. “It’s usually faster to program in Java than in C/C++,” he said. “It’s particularly true if you compare with the iPhone for which you need to learn a new language — Objective-C.”

Stroppa also pointed out that the pool of available Java programmers is bigger than those who program in Objective-C, a language substantially only used for Mac OSX. Augusto Ferrarini from Teradesk goes even further and ranks Android above developing in J2ME, which has the language (Java) in common with Android but uses a completely different (some even call it fragmented) API. Alan Lee from FreeFamilyWatch, who has worked with a lot of experienced mobile developers and architects, goes so far as to call Android a breakthrough in the mobile application landscape.

The iPhone and other competitors
All the developers we asked considered the iPhone important. They see the iPhone as heralding a wave of innovation that Android is also a part of. So it’s no wonder that Chris Hulls from LReady said he expects that this latest generation of phones will mark a paradigm shift similar to the Web 1.0 to 2.0 movement. Sergey Gritsyuk from ﻿Beetaun said that Android is superior. He said he and his colleagues at Beetaun considered developing for iPhone at first but then Android seemed much more attractive to them. They believe Android and the iPhone will speed up developments in the mobile area and that both platforms will take the lead within the next five years if other competitors don’t ramp up dramatically, especially in the area of third-party development.

The reactions we’ve seen so far from Nokia (and Microsoft), for example, can only be considered blindness or arrogance towards Android. “A platform has three to four million lines of code,” said Niklas Savander, executive vice president of services & software for Nokia. “When Android has that many lines, we’ll make an assessment. Until them it’s just an announcement.” But Android already has approximately 11 million lines of code of which 8.6 million are already open source — free for everyone to grab on the net since the moment Android was announced.

VentureBeat’s Top 10 Google Android Developer Challanger winners
It’s hard to figure out which of the Android Developer challengers will be the most successful, since at this point we have very little information on the 50 first-round winners, and a critical factor in their success (besides the basic premises of their apps) will be how the teams proceed and how the user experience turns out. But here are the ten we think have the best shot to win. (By the way, we only had 46 of the 50 companies to choose from, since 4 asked not to be named.)
Scan
A price comparison tool that uses the phone camera to identify a product by scanning a product barcode. With this information it does a web search and delivers up multiple price listings, reviews and, in the case of music, even previews of music tracks. You can find out all the technical details and watch a really cool introductory video here.

Beetaun
A social network which crowdsources all kinds of geographical content like general travel information, reviews and such to provide a universal travel and location guide. Everything is of course geo-tagged and viewable on a map.

City Slikkers
A game that aims to transfer the whole multiplayer online game (MMORPG) idea into the real world using GPS, maps and the OpenGL ES 3D graphics system available on Android. Sounds and looks like a very good idea — let’s see what the real end product looks like.

Phonebook2.0
Turns your traditional phonebook into a contextual and social one. Since Android lets you replace vendor- installed applications, this could completely replace the built-in phonebook. Very graphical and seems to be well thought through. You can find out a lot more about it here and here. 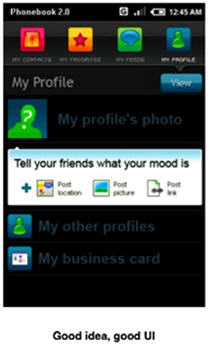 Pocket Journey
This app is similar to Beetaun but its approach seems to be a little bit different and more a combination of crowdsourcing and traditional content providers. It also make use of audio guides, which Beetaun doesn’t seem to. To get a better impression, watch this.

FreeFamilyWatch
A tool that lets families track where their loved ones are and check if they’re exposed to certain dangers. If you’re worried, you can quickly phone the person whose status shows they’re in danger, and I expect you’ll also to be able to set notifications on certain events.

Lready Emergency Manager
Disaster alerts based on location, sent and received over multiple channels to achieve a high probability that the person contacted gets the message even if some parts of the infrastructure are damaged. You can also make use of this multichannel messaging to stay in touch with your family and friends.

Teradesk
Lets you sync all your phone data with an online service. Looks like it could come in handy, and it also has a very nice UI. 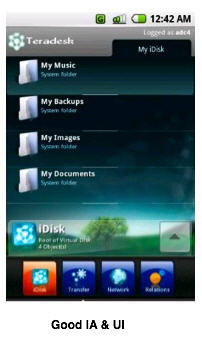 PiggyBack
Interesting concept that deals with car sharing but involved the GPS capabilities of Android and could also work like a taxi service, which might be even more interesting if gas prices keep getting higher. I expect some kind of accounting and security features to be built in to make it all the more usable as a real world application.

Thanks to all interviewees for their interesting answers and ﻿mobile consultant Matthaus Krzykowski for his input on this post.

Daniel Hartmann is a freelancer covering mobile for Venturebeat.