When it comes to providing mobile infrastructure services for games, Amazon has ruled. But Google has been challenging Amazon in its race to be all things to mobile game companies. Gamers may not care about this behind-the-scenes competition between tech giants, but they will notice if their games get better.

These infrastructure providers actually matter in enabling games to become more social and more complex, because the games are tapping computing resources in the cloud, or web-connected data centers, rather than just using the computing resources of the mobile device.

Server technology, in other words, is making mobile gaming better and better with each new improvement in cloud technology. We interviewed a couple of power users among game companies that use Google Cloud to run their games: Backflip Studios and Pocket Gems. Another Google power user is Rovio. But Amazon has hundreds of the biggest game companies in the world, including Zynga and Ubisoft.

The idea behind cloud infrastructure is divide the computing tasks between servers and mobile devices in a way that makes the most sense. Google’s job is to provide all of the backend services that a startup needs so that it can focus on its game design. And a number of game companies say they’re turning to the Google Cloud Platform because it is taking extra steps in making backend services simpler for the game companies to adopt. They’re also using the platform to take mobile games to the next level with improvements to image quality and new technologies like better 3D.

“Developers have to make a highly informed choice of sticking with Google or Amazon because of the access to technology, or choosing a hosting provider who can do it for cheap,” said Carl Brooks, and analyst at the 451 Group market research firm. “A lot of it depends on what services you need to use. It is a design decision. You pick your poison and you stick with it.”

Dale Thoms, the cofounder and chief technology officer at Hasbro’s mobile game house Backflip Studios, said in an interview with GamesBeat that Google platform gives him peace of mind. His team doesn’t have to worry about setting up and managing servers, or dedicating staff to make sure that servers never go down.

“In the early days, in my past companies, we had to build out server farms with internal teams,” Thoms said. “I didn’t want to do that this time. Our early games didn’t need much by way of server technology.”

A title like Paper Toss simply didn’t use much server tech, except for keeping leaderboards accurate. As tasks such as game updates became more complicated, Backflip considered using public clouds, and it decided Google App Engine was the best solution.

Backflip has used Google to launch and continously support the computing needs for more complicated titles such as DragonVale and Plundernauts. And since 2009, Backflip has grown to more than 100 employees — most of whom focus on the task of creating and designing games.

That focus — and the offloading of infrastructure tasks to Google Cloud — is important because Backflip has to launch and update games quickly to stay competitive in the fast-changing mobile game market.

When Backflip launched in 2009, the company’s games had very little server infrastructure. But over time, the addition of frequent content updates, cross-device play, community events, player communications, ads, push notification, and sophisticated data analysis have meant that the company has to have critical server infrastructure in place for every game. 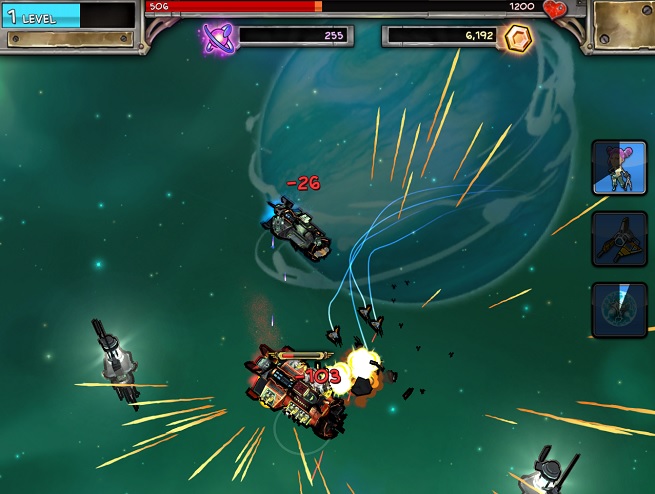 When downtime and latency problems strike, Google takes care of them. Backflip build the games’ server components on Google App Engine. And now it uses Google BigQuery and Google Cloud Storage too. That helps the apps scale automatically whenever traffic spikes happen because a game gets featured or reviewed by a web site.

When Backflip launches updates for games like DragonVale, users come back, often quadrupling normal traffic volume within an hour.

“The scalability lets me sleep at night,” Thoms said. “It just scales up magically. Day-to-day operations are automated.”

And the cost of the cloud tech doesn’t scale up dramatically.

The App Engine and Datastore ensure that a player’s game state, such as the level of achievement or number of dragons owned, is stored in a format that Backflip can use for marketing and analytics purposes. The company has to keep existing users happy by storing a ton of data for them. At the same time, it has to grow its server capacity to accommodate new users, Thoms said.

“We can do massive queries across three years of data to model where players are likely to fall off in a game or where they are likely to start spending money,” Thoms said.

Thoms said he constantly evaluates the Google Cloud Platform against rivals like Amazon, but he felt that Google offers more automation than Amazon does.

“With Amazon, you have to have someone piece things together,” Thoms said.

Brooks at 451 agreed with that assessment.

Thoms’ engineering team writes the application logic, and all of the database, server, and scaling components were handled for them. The team runs custom events all of the time, such as player tournaments, that push the cloud computing requirements higher during certain periods.

Without Google Cloud, he said that his team would have had to be bigger and take more time making its games. And with each new game, development time and rollout is happening faster.

Brooks said that Amazon Web Services and Google Cloud differ in terms of pricing. He said that Google charges for the amount of central processing unit cycles used, while Amazon charges for machine time and transactions.

“Google can be absurdly inefficient for some games,” Brooks said. “If you make a game that makes a lot of computational decisions, but only occasionally sends out transactions, it makes a lot of sense to go with Amazon.” 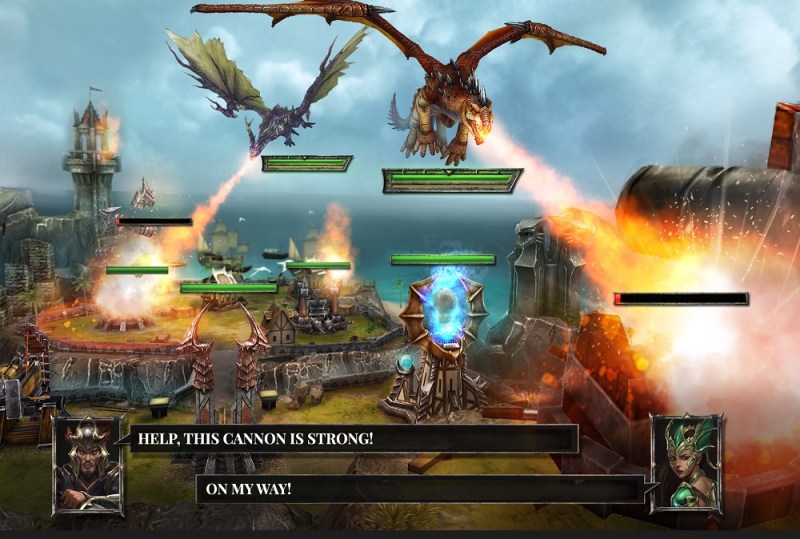 Above: War Dragons lets you fight with Guild mates.

When it needs to, Backflip uses other third-party tools that sit on top of Google Cloud, such as Tableau, a visualization platform for data, to help improve how it understands user behavior.

David Underhill, the director of backend engineering at mobile game maker Pocket Gems, said in an interview that his company teamed up with Google from its very inception about five years ago, when the Google App Engine was new. It has stayed with it ever since and adopted more and more of the platform.

“We started using it when it was free and we were a very cheap company,” Underhill said. “It was a great price tag. But once we got into it, we realized the real benefit was that Google takes care of all of the operations in the data center, like scaling up the service automatically. We just had to worry about implementing the features of the game on top of it.”

Over time, it added player interactions that are more social and interactive.

With its new War Dragons game, San Francisco-based Pocket Gems envisioned a game where players could breed dragons, train them, level them up, and fight alongside alliance members in synchronous attacks. The game is online and it delivers results in real-time. Players can collect up to 70 dragons, rendered with Apple’s high-end Metal game graphics technology. 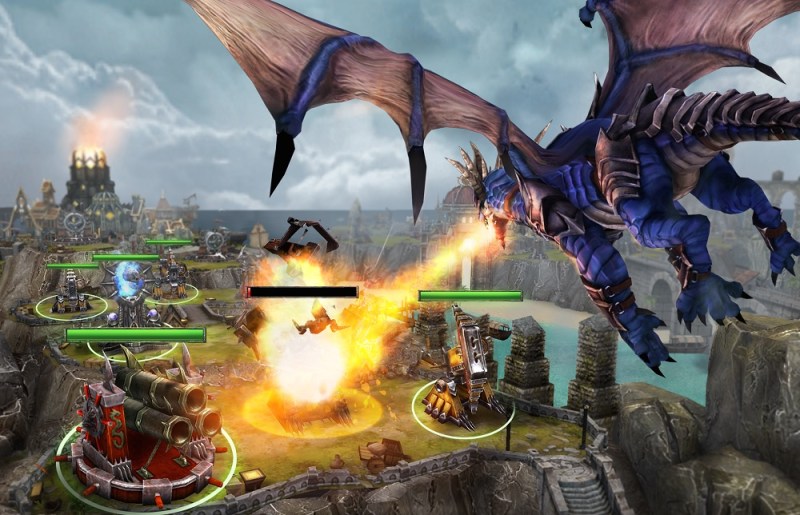 Pocket Gems holds tournaments such as its King of the Hill event. Players organize into teams and fight other teams for control of limited resources. More of the game is now computed in the servers now than on the clients, Underhill said.

“Players are fighting over fortresses, but those fortresses don’t exist on their own mobile devices,” he said. “They exist in the cloud which handles all of the communication and the changes” in the game state for each player.

The shift of the game features to the cloud allows game companies to create better and better shared worlds, Underhill said.

All of that translates to a heavy-duty game that pushes server technology to the limit. The cloud-based game is also more secure, as the Google Cloud can verify the status of any given user. That makes cheats or exploits more difficult for people who want to gain an unfair advantage in a competition.

But using Google Cloud doesn’t mean that every mobile game is becoming generic. Pocket Gems can test changes in the game world without disturbing gamers. It can also use “custom instances,” or create features that are unique.

“We can get thousands and thousands of players competing for dozens of resources, in tournaments that we can create in very short time frames,” Underhill said. “That creates different experiences that keeps the game fresh.”

“When we looked at it for our player content, it hasn’t made sense,” Underhill said. “Google does such a good job of managing the player data and operations that we haven’t considered the switch.”

When things go wrong, Underhill has to talk to Google, but that’s part of the learning process in pushing the tech to its limits. There was a time when some of the calculations for tournament winners were taking longer. So Pocket Gems and Google brainstormed the problem to solve it.

“When we need them, they are very accessible,” Underhill said.

For the future, Google is working to provide more visibility into the platform, and which processes it is running at any given time, in an automated way.