First up is Sceneform, a new SDK designed to help Java developers create scenes with ARCore, optimized for mobile, without the need to learn OpenGL. The goal with Sceneform is to leverage ARCore’s advanced 3D object and tracking capabilities within old and new Java apps.

Second is Augmented Images, a new ARCore feature that lets developers attach augmented images to real-world objects while tracking and moving with them in 3D. The feature includes support for vertical plane detection so that AR objects can be attached to walls, as well as horizontal surfaces. Martz offered an example of how Augmented Images will work, letting an ARCore user see what’s inside a box before opening it. Both Sceneform and Augmented Images will apparently be for Android devices only. 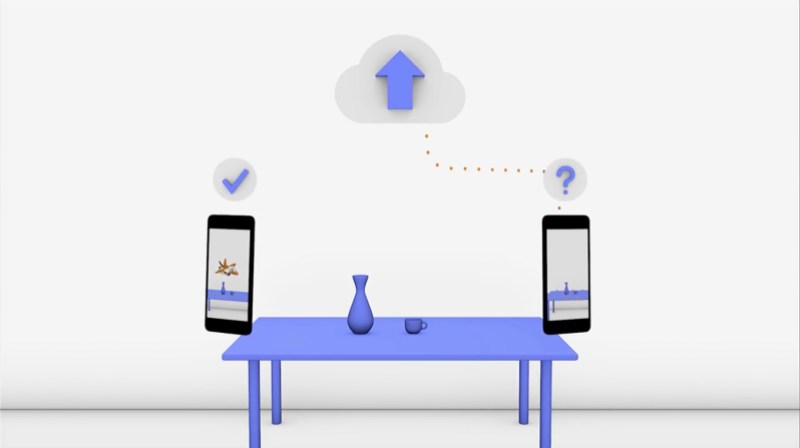 Above: Cloud Anchors are supported on both Android and iOS devices.

Third is Cloud Anchors, which lets multiple devices use the cloud to share information about objects within a real-world scene. This will enable collaboration between multiple ARCore device users so that they can collectively draw or manipulate AR objects within a common space, displaying tracked object locations correctly from each person’s perspective.

Notably, Google said that Cloud Anchors will be offered for both iOS and Android devices to encourage cross-device use, though it appears that only iPhones are supported at first — the iPhone SE, iPhone 6s series, iPhone 7 series, iPhone 8 series, and iPhone X. Java, Unity, and Unreal engines are also supported.

ARCore 1.2 is available now from Google’s developer website. The SDK enables developers to juxtapose virtual assets atop real-world physical surfaces using the phone’s camera and screen to provide live video of the merged experience. It is a followup to Tango, a Google AR software initiative that launched in 2014, saw only modest support, and was effectively discontinued in 2017. By comparison, the newer ARCore requires at least Android 7.0 Nougat and was initially pitched as compatible with 100 million devices across 13 specific Android phone models.