Google has published a study on its Think Insights page that investigates just how important YouTube is to coverage-hungry gamers. The findings show that 95 percent are relying on these videos as a major source of entertainment and news — and spent more than twice the time watching them in 2012 than the year prior.

This particular rate of growth was greater than YouTube’s overall growth in the U.S., the report says. That surprised Matt McLernon — the communications manager at YouTube, the Google-owned video-sharing website — the most.

“More than half of the folks in the top [lists of entertainment on YouTube] are in some form of gaming,” said McLernon in a phone call with GamesBeat. 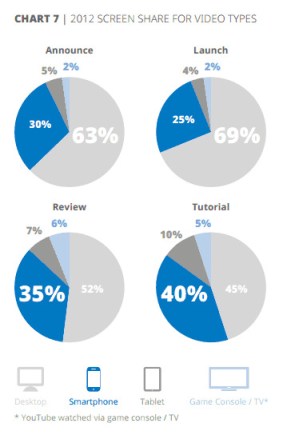 Above: A look at how viewers use mobile devices to watch gaming videos.

More people are watching gaming videos not only online but also on mobile devices. Mobile use more than doubled in 2012 from 2011, with one in three views came from a smartphone or tablet.

In addition, most prelaunch videos are streamed on desktops while second-screen viewing peaks later in a game’s lifecycle, with 50 percent of tutorials consumed on mobile. This may be for reasons of convenience: It’s easier to look up a walkthrough on your phone while playing a game than it is to run back and forth between a computer.

The times when gamers are watching these videos is changing as well. Weekend viewing saw an 18 percent day-over-day increase, and viewership rocketed over the summer, from June through August. Google also reported than 32 percent of views happened between 6 p.m. and 10 p.m. — primetime television viewing hours.

The main types of gaming videos are in seven categories: brand-released content including announcements (such as teaser videos), gameplay demos (an early look at a game’s mechanics), launch videos (a reminder close to release day), community-created content such as game-powered entertainment (such as funny videos or parodies), tutorials (how-tos), and walkthroughs (full gameplay footage) as well as third-party reviews (assessments of the game).

Google contributed much of the growth to a jump in subscriptions to gaming channels — nine times in 2012 than in 2011. Games like Activision’s Call of Duty and Ubisoft’s Assassin’s Creed were huge traffic performers, said McLernon, along with gamer channels like PewDiePie (who’s also one of the biggest creators on YouTube overall), TobyGames, and CaptainSparklez.

More publishers are not only creating their own content but also working with established, popular partners on YouTube, said McLernon. Ubisoft teamed up with Smosh, and Activision collaborated with iJustine, for example.

“It’s a really exciting thing to see that it’s not just creating content and putting it out into the wild but really working with the community and working with the popular memes in the audience to make great stuff,” said McLernon. “This kind of content has done really well for them and for other game publishers as well.”

Above: Video content breakdown based on publisher and community sharing.

Gamers typically watch content released by companies prior to a title’s release. After release, the focus shifts to engaging with other players. These videos doubled the views that the top-selling games of 2012 earned. Both types are equally as common, too: 50 percent are brand-released, and 47 percent come from the community.

Brand-released and third-party videos tend to receive more comments and share per view while more “likes” and “dislikes” appeared on community content.

This data is important for marketers and publishers, as 82 percent of game sales occur in the first four months of release, but 60 percent of views happen on prelaunch videos, which means publishers can get a good sense of how their games will do by gauging interest early.