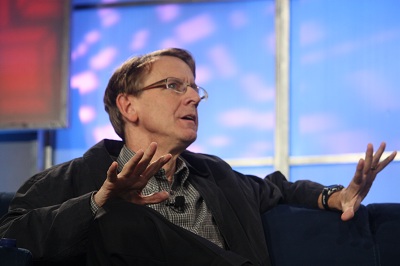 John Doerr, the legendary Silicon Valley venture capitalist, gave high praise to Zynga, the leading social game company, saying it was one of the best investments his firm had ever made.

Doerr’s firm, Kleiner Perkins Caufield & Byers, has invested in a lot of companies from Google to Amazon. So Doerr’s comment, spoken at the Web 2.0 Summit in conversation with fellow VC Fred Wilson and journalist John Heilemann, is particularly worth noting.

Doerr said Zynga is the most-profitable, fastest-growing, and has the happiest customers of any company that Kleiner Perkins has invested in. Just three years old, Zynga has an estimated market value above $5 billion, more than 320 million registered users, 1,300 employees and estimated revenues this year above $500 million.

Doerr and Kleiner Perkins have a lot to crow about lately. Besides investing in Zynga, they invested in Ngmoco, the mobile game company that was acquired recently by Japan’s DeNA for $403 million. Doerr said that the payback from the Ngmoco investment more than paid back all of the money the firm invested in its iFund, which focused on iPhone investments.

While Doerr was excited about high valuations, calling the latest period a “boom” for Silicon Valley, Wilson was cautious, calling it a “bubble.”

Doerr had high praise for Apple’s iPhone ecosystem, which he said has generated more than $1 billion in royalties for app makers and freed developers from having to submit their apps to carriers. Wilson, however, said Apple had done nothing more than recreate the cable TV monopoly system, which is a closed platform. Wilson is an enthusiastic fan of the Android platform.

Doerr shot back that Apple was great at execution and, stealing a quote from statesman Colin Powell, Doerr said, “Innovation without execution is hallucination.”

“Zynga is the model” of success for entrepreneurs to follow Doerr said.

Wilson praised Doerr as the “Michael Jordan of venture capital.” But Doerr acknowledged that Kleiner Perkins isn’t infallible. He recalled that Kleiner Perkins had a chance to invest in Twitter and chose not to do so because the startup didn’t have traction. Now Twitter has more than 100 million users, and Kleiner’s mistake is obvious, Doerr said.