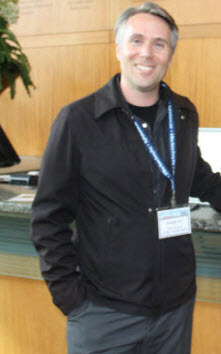 Google has been acting like it’s going to move into the social gaming space for months now. But it’s not clear how serious we should take this effort by the search giant to move into new territory.

Today, Google’s games evangelist Mark DeLoura said that he has left the company after just four months on the job. In a blog post, DeLoura said, “This past Monday, I left Google. There are a lot of very interesting things going on at Google right now, and I enjoyed working with many of the people there, but it was not the perfect fit for me. I’m looking forward to my next adventure.”

DeLoura said one of the interesting things Google is doing is Native Client, which opens up the web so other languages can be used other than HTML/JS and Action Script. He also said he was proud of the coverage Google got for his talk about the Chrome Web Store. He also said he looks forward to the day where there are more games running in the cloud, rather than on PC clients, so that you can log into your game wherever you are. And he hopes that platform holders will make it easier for developers to create cross-platform games.

But DeLoura didn’t really have much to say about all of the other great things Google is doing for the game market. And perhaps that gives us a clue about why he left. Google is reportedly working on its own social network to compete with Facebook. For that, it needs to have good social games, and that is perhaps why it bought Slide and is preparing to invest $150 million in Zynga. But Google is far behind in the game space. DeLoura, a former Sony developer expert, brought the company some credibility in games. But now that he’s gone, so much for that.