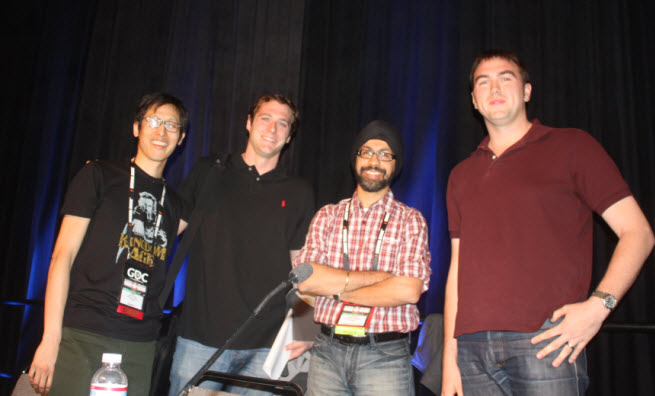 Within the year, Google will turn its different game platforms into a single, unified platform that developers can more easily target. That’s the promise made today by Punit Soni (pictured second from right), group product manager for the company’s Google+ social layer.

Soni made the declaration during the Game Developers Conference in San Francisco.

That suggests Google intends to unify its web browser, social, and mobile platforms and give third-party developers access to a potentially huge audience. Conceivably, it could use technologies such as HTML5 and Native Client to achieve that cross-platform game performance. If Google does this, it will have a powerful competitor to rivals such as Facebook.

Google+ is already huge with more than 100 million monthly active users and 50 million daily active users. Those users spend over one hour a day on Google, and that activity has lifted the performance of search ads by 5 to 10 percent, Soni said.

Game companies are excited about having an alternative to Facebook, but they still want Google to deliver a lot of new ways to promote games to users. Soni acknowledged that and said the company has been working hard to refine the game platform on Google+ since the launch last August. It is, for instance, adding new notification systems that promote games to friends.

Soni said Google will bring cutting-edge technologies into the game platform such as Hangouts (video communication), Native Client (faster graphics on Chrome web browsers), mobile games, and better distribution and discoverability. Google is working on streamlining payments as well. Soni referred to Google+ as a social layer, Google 2.0, powering all of Google.

“It was very clear games was one of the first things we would put up there on Google+,” Soni said. “Games bring people together. They are an important part of how users interact online. Game developers push boundaries, and games are fun.”

Over time, he said, Google will execute on its mission of One Google, with user-centric messaging, and a single home for all of your game playing.

He added, “We realize that gaming is at an interesting point in its evolution and we have technology and platforms to push it to the next level.”

Early on, Google started with baby steps with a curated set of partners who were willing to experiment. Now it is expanding that effort with more viral channels promoting games.

Google’s digital marketplace for mobile applications, music, movies, and books is unifying under a new name in an effort to spruce up the shopping experience. The store will make it easier for customers to manage their content and navigate from one section of the store to another.

Beginning Tuesday, the Android Market will be known as the Google Play Store. Google’s eBookstore and recently launched music service will also be part of the Google Play Store. The same selection of books, music, and movies had already been available on Android Market, which serves the more than 300 million Android devices in use today and has more than 450,000 mobile apps, 4 million books, and 13 million songs and movies. Google says 13 billion apps have been downloaded from the Android Market, compared to 25 billion from Apple’s App Store.

Mike Blanchette (second from left), manager of platform operations at Disney’s Playdom, said he would like to see the promotion of games on Google+ reach more users beyond Google’s self-professed gamers, since that will drive game adoption among new users. But Google has to balance the interests of game developers against the interests of non-gamers, who don’t necessarily want game spam.

“Engagement is real good for Google+ and there is potential for massive game communities there,” he said. 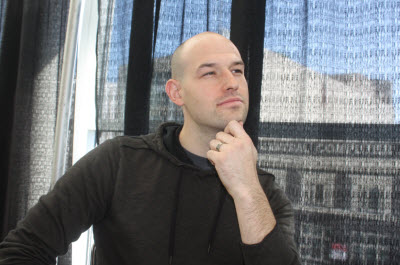 Dan Chao (pictured top left), lead designer of Kingdom Age for Funzio, also said on the panel that it was a trivial engineering task to convert his company’s Facebook game Crime City to Google+.

Meanwhile, Colt McAnlis (pictured right), a games-focused developer advocate at Google, told VentureBeat that a number of console game developers are in the midst of porting their games over to Google Chrome Native Client, which enables browser games to take advantage of 3D graphics hardware in computers. Most browser-based games can’t do that well.

Back in October, Chrome had 200 million users and a million new installs a day. Six new native client titles are in the works.