Apple has prioritized user privacy over targeted advertising, and Google is spelling out today what that means for itself as well as game and app developers.

Apple is advocating its App Tracking Transparency (ATT) policy, which will require developers to ask for permission when they use personal data from other companies’ apps and websites for advertising purposes, even if they already have user consent. It will ask users to opt-in if they will allow advertisers to use their data via the Identifier for Advertisers, or IDFA. Many tests show that many users won’t allow it, and that means they won’t be so easily tracked for advertising purposes.

This change could have a huge impact on the mobile advertising ecosystem, as it could make it harder to target users efficiently with advertising. Eric Seufert, a user acquisition expert, said on Monday that he believes that Facebook could suffer a 7% revenue hit — a loss of tens of billions of dollars over time — as a result of the IDFA changes, and it’s no secret that Facebook isn’t happy about the impact on itself as well as small businesses. At our Driving Game Growth event on Tuesday, Facebook leaders pointed to the IDFA changes as creating uncertainty for mobile games in 2021.

Google, which could also be impacted by the policy change, has stayed out of the fray — until today.

“Today we’re sharing how Google is helping our community prepare, as we know that developers and advertisers in the iOS ecosystem are still figuring out how to adapt,” said Christophe Combette, group product manager for Google Ads in a blog post.

Apple’s ATT changes are built into iOS 14, which has pretty good traction with users who have updated their iOS devices with the new version of the operating system.

Combette said the changes will “reduce visibility into key metrics that show how ads drive conversions (like app installs and sales) and will affect how advertisers value and bid on ad impressions.”

As such, he said app publishers may see a significant impact on their Google ad revenue on iOS after Apple’s ATT policies take effect. To help improve iOS monetization rates, Combette said developers should upgrade to version 7.64 of the Google Mobile Ads SDK for new features like SKAdNetwork, which is Apple’s substitute for targeted IDFA ads. 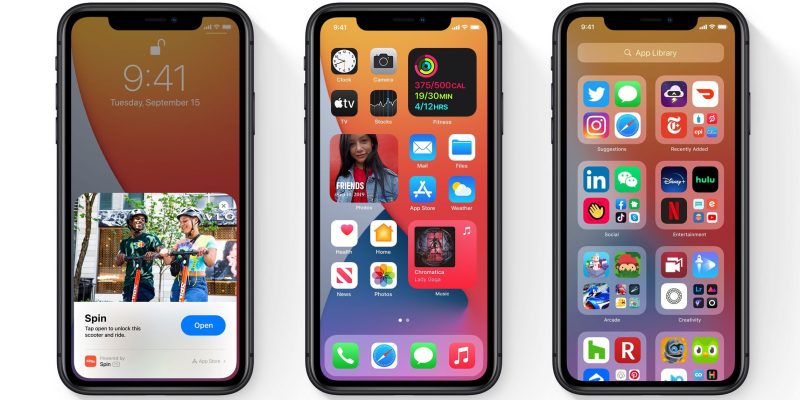 Above: iOS 14 has some big changes for the mobile industry.

Combette said Google is working with the industry to give Apple feedback on how to further improve SKAdNetwork so advertisers can measure their campaign results somewhat accurately on iOS 14.

“In the meantime, we encourage app advertisers to upgrade to the latest version of Google Analytics for Firebase for new features like SKAdNetwork support,” he wrote. “We also encourage advertisers to monitor the performance and delivery of all iOS App campaigns closely and, if necessary, make adjustments to budgets and bids to achieve their goals. Learn more about how app advertisers can prepare and tune in to our Learn with Google education series for ongoing guidance.”

How Google is complying with ATT

When Apple’s policy goes into effect, Combette said Google will no longer use information (such as IDFA) that falls under ATT for the handful of Google iOS apps that currently use it for advertising purposes.

“As such, we will not show the ATT prompt on those apps, in line with Apple’s guidance,” he wrote. “We are working hard to understand and comply with Apple’s guidelines for all of our apps in the App Store. As our iOS apps are updated with new features or bug fixes, you’ll see updates to our app page listings that include the new app privacy details.”

Combette said that Google is putting users and their privacy first.

“Transparency, choice and control form the bedrock of our commitment to users, and advertising is no different,” he said. “We remain committed to preserving a vibrant and open app ecosystem where people can access a broad range of ad-supported content with confidence that their privacy and choices are respected. That’s why we’ll continue to invest in privacy-preserving technology ― including aggregated and on-device solutions ― like what we’re developing for the web, along with ecosystem partners, in the privacy sandbox.”

Google has not yet said whether or how it will follow up with IDFA-type changes for Android.