These improvements go a long way toward fulfilling a dream for game developers of enabling people to play games on their TVs — without expensive game consoles. The cool thing for gamers is that there is no limit to the number of people who could use a smartphone to connect to the same game on a TV. You could have a crowd of people in your living room dancing to Ubisoft’s Just Dance Now game by waving their phones around. Not only is that a threat to existing game consoles, it also allows you to play games that you can’t play on the consoles.

Chromecast is a digital media player created by Google and housed on a dongle. You put a Chromecast device in your TV and streaming content via Wi-Fi networks from a computer or Android device. You can stream content from Chrome browser apps such as YouTube. Google Cast technology lets you activate an app on your device and then see it play back on the TV. Consumers have tapped the Cast button more than 1.5 billion times since July 2013, and YouTube watch time is up 45 percent via Chromecast activation. 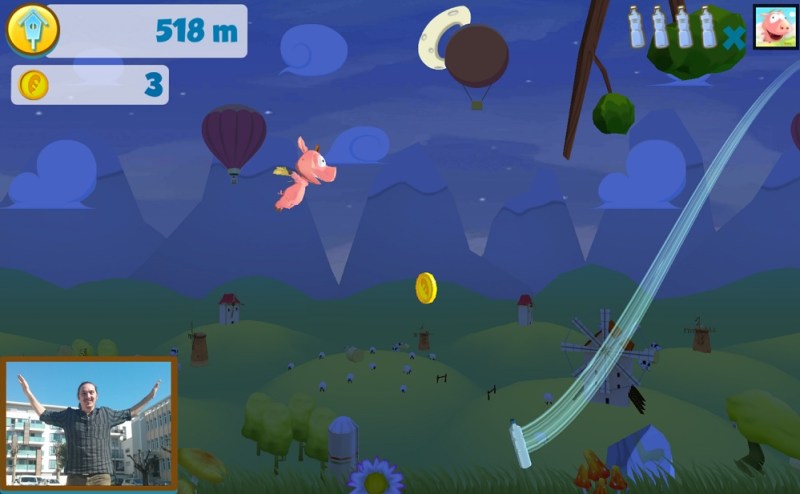 Above: Fit Flap by Break First

Back in November, Google launched the Google Cast Game Manager, which lets you turn the TV screen into a game display for apps that are activated on other devices, such as laptops, smartphones or tablets. Now the company is introducing Game Manager APIs that make it much easier for developers to create Chromecast multiplayer games.

“We just want them to concentrate on making great games,” said Nathan Camarillo, the product manager for Google Cast, in an interview with GamesBeat.

You can use the smartphone as a personal game controller, instead of using a gamepad connected to a console. Gamers won’t get excited about that. But people who don’t want to bother buying their own console might enjoy having the alternative of playing games via Chromecast. A new Cast Game Manager API lets developers synchronize game play across a large number of players. Ubisoft pioneered this feature in Just Dance, where it could get hundreds of people dancing at once. But now it’s easier for lots of developers to do the same. The new features enable players to have unique identifications as players, making it possible for multiple players to share a single device.

Google Cast is also making it easier for graphically intensive apps or games to run on Google Cast receivers using the Google Cast Remote Display APIs for Android and iOS. You can get this capability by buying the $40 Chromecast device, rather than a console that costs $200 or more.

Above: Rolocule’s Motion Tennis on Chromecast.

One of the features made possible by this is the functionality of the Wii U, where you can see one image on the TV screen and a different image on the Wii U GamePad, a tablet-like controller. That allows a player in a football game to pick plays using a tablet without revealing the play to an opponent. No longer does your smartphone screen have to mirror the image on the TV.

You can also use motion sensors in the smartphones to control games that are Cast to the TV. In effect, Google’s Chromecast can duplicate a lot of the functions of a Wii U game console. Nintendo can’t be happy about that.

“You don’t need to have eight GamePads [or Wii remotes] lying around,” Camarillo said. “Everybody can pull a phone out of their pockets. They can initiate an app, connect to the TV, and play this great game together. They’re usually games that are easy to understand and you can learn really quickly.”

Google said that 90 new premium partners have joined Chromecast in the past year, including Watch ABC, PBS Kids, and Comedy Central. It also has a lot of game partners. The early adopters include Ubisoft with Just Dance Now and Hasbro with Scrabble Blitz and Catch Phrase Blitz, and MediaMonks’ Tricky Titans. In Catch Phrase Blitz, you hold a phone over your forehead. Other people can see a word on the screen, but you can’t. The phones serve as scorekeeping device, and everyone in the room can play the game together.

“It could be really fun and really loud at a party,” Camarillo said.

In Ubisoft’s racing game Driver Speedboat Paradise, you can see the dangerous waves of the race course on the TV screen while your phone displays your controls. You use your phone as a kind of virtual steering wheel. Rolocule has also created a game that uses a smartphone’s motion sensor to play a tennis game, dubbed Motion Tennis.