Above: The Ingress world map.

Google’s Niantic Labs has been experimenting with an augmented-reality, mobile-only game for nearly a year. And now the experience, Ingress, is about to formally launch on Dec. 14. 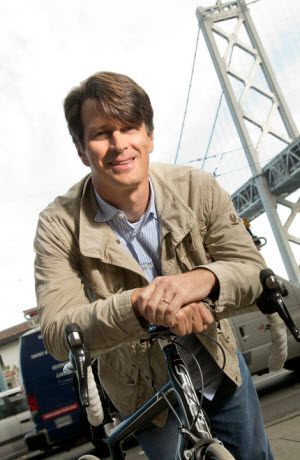 As soon as its 39-city global player event, dubbed Operation #13MAGNUS, finishes, Ingress will exit its public beta. The live events have occurred in more than 80 cities and people have downloaded the conspiracy-style game more than 1 million times.

John Hanke, vice president in charge of Niantic Labs, said in an interview with GamesBeat, “Gaming and real-life meetups are really coming together. I can’t say we predicted how popular the live meetups would be.” He added, “We didn’t anticipate the degree to which people would go to live events to meet people they didn’t already know. The game is a social icebreaker.” 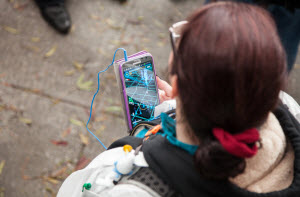 Above: Ingress on a phone.

As of today, Google will switch from an invitation-only setup to welcoming all Android players into the experience. Players can now freely download Ingress from the Google Play Store. Niantic, an autonomous division within Google, is also announcing a one-time badge, the Founder Medal, for all players that reach level five by Dec.14.

From Nov. 4 to Dec. 14, players can participate in the Ingress Elite V challenge. The contest will identify the top five most elite Agents (what Ingress calls its participants) from around the world. Ingress performance stats and creative social-media submissions will determine the winners. Those Agents will visit Google’s Niantic Labs for secret Ingress briefings in February of next year, and they will participate in a special interview with the game’s faux TV show host, Susanna Moyer from The Ingress Report (a weekly YouTube program).

Hanke said that the company spent the past year getting its technical infrastructure right, so people could play the game without annoyances such as slow response times.

“For a while, demand outran us,” Hanke said. “That’s behind us now. … The game has matured a lot. The communications and the things you can do have changed a lot in the last 11 months.” 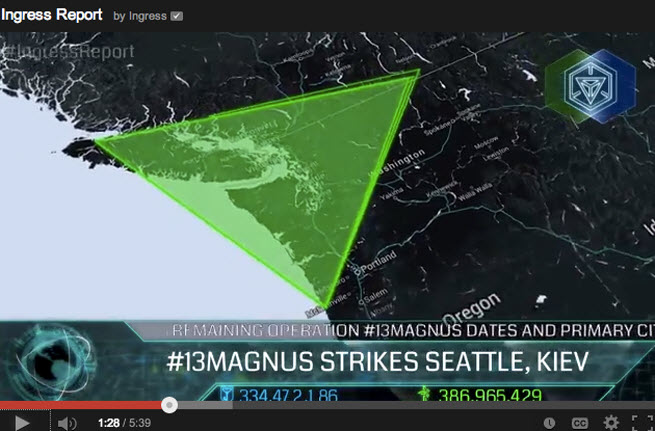 Above: The Ingress Report.

If you get near a portal, you can hack it in order to take it over for your side and benefit from the energy concentrated around it. That energy has an influence on human minds and is a spark for our creativity.

That means that Ingress has become less of a hardcore-fanboy title and more welcoming to a broader audience, said Hanke said.

During the beta, Niantic added features such as remotely recharging portals, and it improved personal profiles. So far, Hanke is proudest about how the game encourages people to work together.

“It’s so much fun to do the live events, walking around in a city,” Hanke said. “It’s almost like an e-sport gamer event, where people strongly identify with their teams. After that part is over, it becomes very social at the live events.”

Niantic is now intentionally using the live events to advance the story and generate more interest in the game. And the Ingress Report picks up on the news from these gatherings and relays it to the larger audience.

At the start of Operation #13MAGNUS, an “XM entity” known as Roland Jarvis shattered into 13 pieces. These shards scattered throughout the world. Now, Enlightened Agents must reunite them in order resurrect their leader. Resistance Agents will be seeking to destroy the shards and rid the world of Jarvis forever. 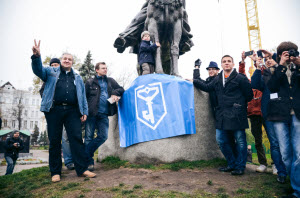 Above: An Ingress event in Kiev, Ukraine.

People are playing Ingress in more than 200 countries with live events driving interest and giving players the chance to meet each other for the first time. The Ingress fiction has spread across two e-books, a comic-book series, and the aforementioned Ingress Report.

“The game is almost more like a social network,” Hanke said, and that fits with Google’s own ambitions.

“We see ourselves as a platform company,” he said. “The idea behind Ingress is to understand the space of mobile social-location games and what it means for the future of Android, Google Glass, and game developers.

Google has more appreciation for games, partly because of the social experience it is getting from them.

“The platform is the long-term strategy,” Hanke said. “I like to think that we are broadening the definition of what a game is with these augmented-reality games.”

The player activity is impressive. Agents have created more than 2,000 Ingress communities on social networks. Creative designs have emerged for shirts, badges, jewelry, and other objects. More than a dozen Agents have tattooed the Ingress logos on their bodies.

The remaining live player events will happen in the following cities: Nov. 16 in Dallas, Texas and Vienna, Austria. Dec. 7 in Phoenix, Ariz. and Rome, Italy. Dec. 14 in San Francisco and Buenos Aires, Argentina. 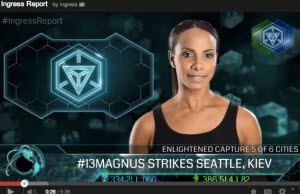 Above: The Ingress Report discussing events in Kiev and Seattle.

Hanke said the storyline has a lot more things to come, but at some point, the game will come to a satisfying conclusion.

The title is free to play, and Niantic is experimenting with a sponsorship model. For instance, it worked with the Jamba Juice smoothie chain to make its stores into portals. In New York City, the Duane Reade pharmacies are portals. Ingress is already pre-installed on phones like the Droid Ultra, and the players who use it will have access to a power-up known as the Ultra Strike. 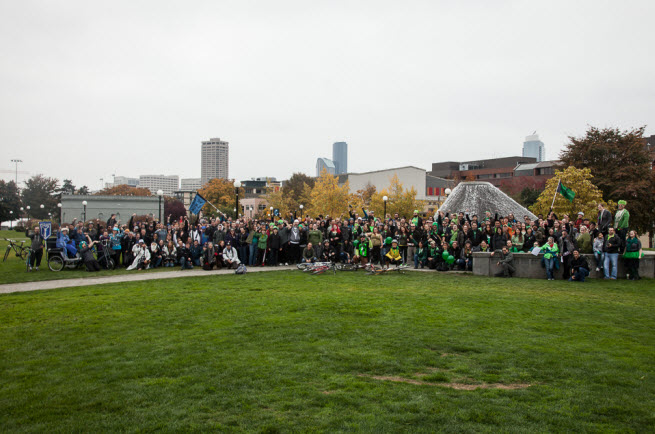 Above: An Ingress meetup.