More than 70,000 people are likely to attend the Electronic Entertainment Expo video game tradeshow coming up the week of June 8 in Los Angeles. But the virtual attendance of fans watching over the Internet is much higher, and it is becoming more impressive, based on data analyzed by Google and its YouTube video division.

This means it’s important for video game brands to deliver the entertainment and information that the virtual attendees want. The data verifies what everybody intuitively knows about marketing games and consoles during the industry’s biggest tradeshow: You have to fight for the eyeballs that are looking for the information at exactly the right time. 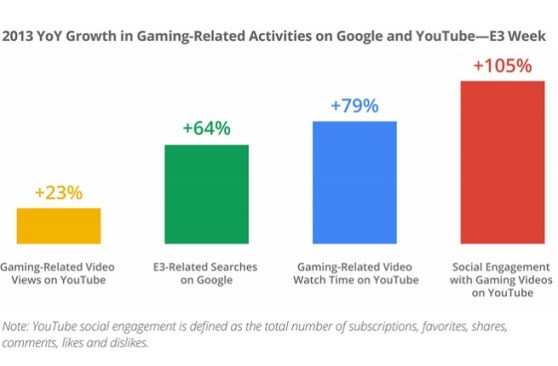 E3 isn’t open to the public, but livestreams and videos posted from the event are becoming more popular every year. Google’s data shows that E3 is getting bigger each year. E3-related searches have been on an upward trend each year, with the exception of 2012, when the event didn’t have much game hardware news. When the E3 press conferences arrive, gamers are glued to their screens.

Google’s anonymous records of searches and YouTube video views shows that E3 activity surges in the weeks around the show. Gamers actively search for information about the game press conferences that start a day before the E3 show floor opens (June 10 this year).

Livestreams of E3 press conferences are also hugely popular. About seven in 10 E3 searches on Google were for “livestreams” during last year’s E3. Viewing of recorded gaming-related videos peaks on the second day of E3, which is typically when publishers release new videos and trailers of upcoming titles. When news breaks at E3, gamers begin searching for it within minutes.

Console-related searchers for Xbox One and PlayStation 4 peaked immediately following the Microsoft and Sony announcements. Google hypothesizes that gamers watch the livestreams of the press events as they happen, and then they quickly turn to Google to search for more information. Last year, gamers wanted to compare the PS4 and the Xbox One, as searches related to both of the consoles spiked at the same time. The No. 1 thing gamers looked for last year was the price of the consoles as well as ways to preorder them. They also wanted news and reviews. (And yes, we’re grateful for that). 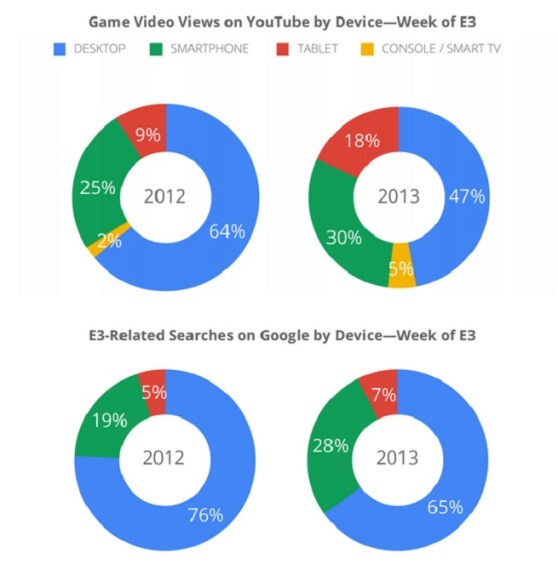 Last year, playing used games on the Xbox One was a hotly debated topic among gamers last year, as Microsoft’s policy on used games was a major source of controversy. The top games of last year were The Last of Us, Battlefield 4, Grand Theft Auto V, Call of Duty: Ghosts, and Halo 5.

Gamers are also increasingly turning to mobile devices. From 2012 to 2013, there was a 143 percent increase in the number of E3-related searches on Google and an 80 percent increase in game video views on YouTube across both smartphones and tablets.

Today, YouTube is launching the 2014 E3 Trailer Battle. This channel will host all of the trailers released during the E3 conference in one place. You can vote for your favorite trailer from June 9 to June 16. The most popular trailer of E3 2014 will be announced on June 23.

Gamers are increasingly relying on online video and search to find E3 information. They’re more socially engaged than ever when watching game videos on YouTube. Gamers search and view online video on whatever screen best suits them at a given moment.