Gordon Ramsay will be damned if his chef’s game isn’t the best mobile celebrity title on the market. He’s been working on it for the better part of two years with Glu Mobile, the company that made Kim Kardashian: Hollywood and is trying to corner the market on celebrity titles in the $30 billion mobile game market.

At Glu’s headquarters in San Francisco, the Michelin-starred Ramsay stared yesterday at 36 game developers at Glu Mobile’s headquarters in San Francisco. As TV cameras rolled, he said, “Great energy. Is this game going to kick ass?” They replied, “Yes sir!” He keeps them going until they’re out of “yes sirs.” Based on the success of Kardashian’s game, which the celebrity tweeted generated $80 million in royalties for her, other celebrities are stampeding into the mobile games market. Some of them are lucky, like Kardashian. And some are not, like Katy Perry. 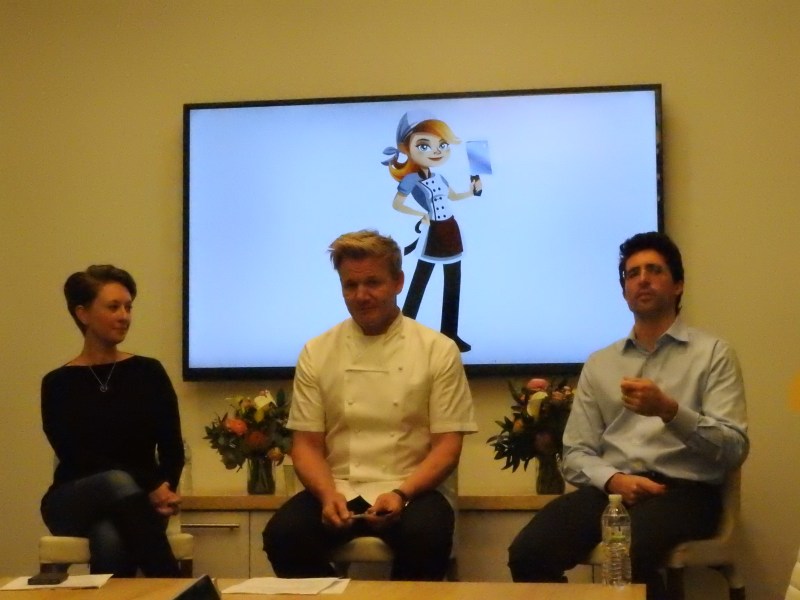 “All of you, fuck off, and back to work!,” he said in his signature British accent, speaking in a joking way to the development team.

Then he asked who is Glu’s best chef. The team pointed to a guy named Bravo, who looked sheepish. Ramsay pointed at him.

“You, and me, in a cook-off, when we launch,” Ramsay said. “I want to see how good your scrambled eggs are. Three eggs only. Don’t fuck it up.”

Later, with in an interview with a handful of press, Ramsay started the conversation more politely. The seeds for the Ramsay collaboration started in May 2014, when Glu acquired PlayFirst, a studio that created the Diner Dash and Cooking Dash games. Niccolo De Masi, CEO of Glu, approached Ramsay about making a game based on his celebrity personality, combined with the moment-to-moment, frenetic gameplay of the Dash games. Ramsay said he started playing games like Cooking Dash while on long flights.

“We’re delighted to be working with the most-recognized man in the world when it comes to this,” De Masi said.

Ramsay has 10.5 million followers across all his social-media accounts, and he is also regularly on television with his Hell’s Kitchen, Kitchen Nightmares, and MasterChef. When he’s seeking out a subject for a game, De Masi tries to pitch the popular celebrities who can share or tweet things about the games to get players re-engaged in the content. Glu has lined up celebrities like Taylor Swift, Britney Spears, and Nicki Minaj — with a total following of more than a billion followers on social media. That adds up to a lot of free advertising for Glu’s games — a very important element in a world where user acquisition costs are skyrocketing. 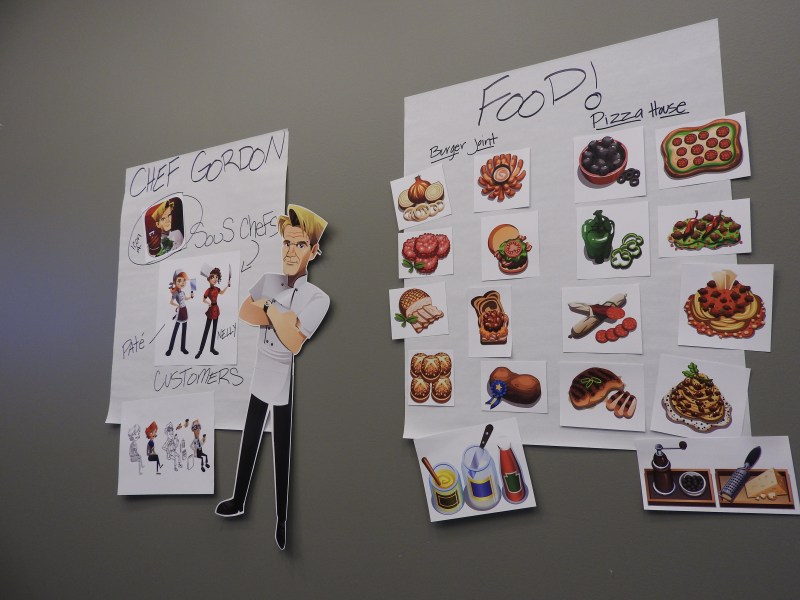 Above: Art assets from the Gordon Ramsay game.

“This is a partnership that will break new ground because we have never done something this deep in a genre like this with someone like Mr. Ramsay,” De Masi said in an interview. “We have built a game that we believe will persist for many years to come. This is a unique, living, breathing partnership.”

Becky Ann Hughes said the game is built on top of the Cooking Dash 2016 engine, but it is not a reskin. It’s an all new game with all new assets that Ramsay himself has scrutinized. Tom Hall, one of the original creators of Doom, is part of the team putting together the game.

“We’re adding social to a Dash game, like chef duels and a farmers market,” Hughes said. “We also adding a mechanic that Gordon himself came up with: an inspector mechanic with ‘Wishelin’ stars.” 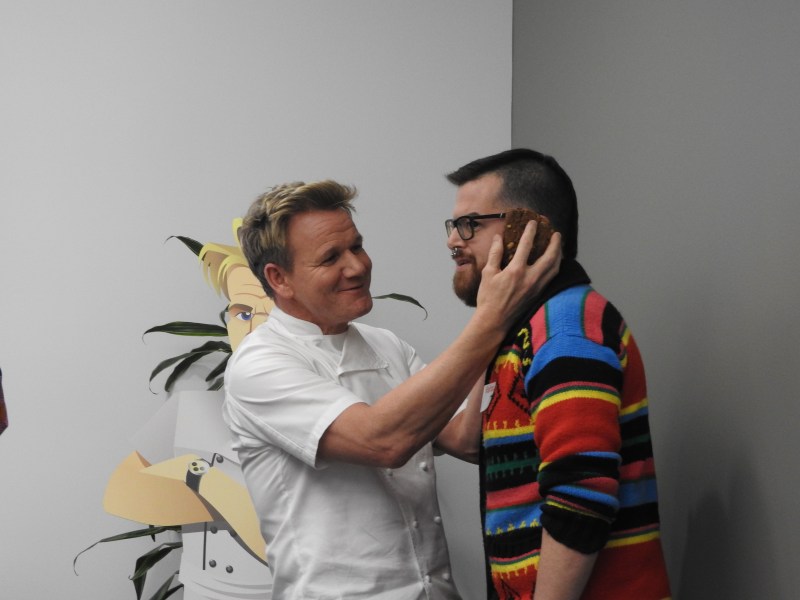 Above: Gordon Ramsay playfully creates an “idiot sandwich” with a journalist.

Part of the authenticity are Ramsay’s plentiful insults and curses. He said he isn’t proud of them, but he often says things like “fucking doughnuts” and “idiots.” He once put two pieces around a chef contestants ears and asked her what she was. She replied, “An idiot sandwich.”

“Here’s the thing. I got to keep it real. There are times when I get a little more fierce because the stakes are high,” he said. “If my chefs were standing there and sending out crap from the kitchen, I’m not going to high-five them. There are some severe words.”

Hughes said that Ramsay’s character serves as your mentor through the ups and downs. If you do something right, Ramsay praises you.

“Fuck off is such a lovely word,” Ramsay said. “We can’t use it that often.” 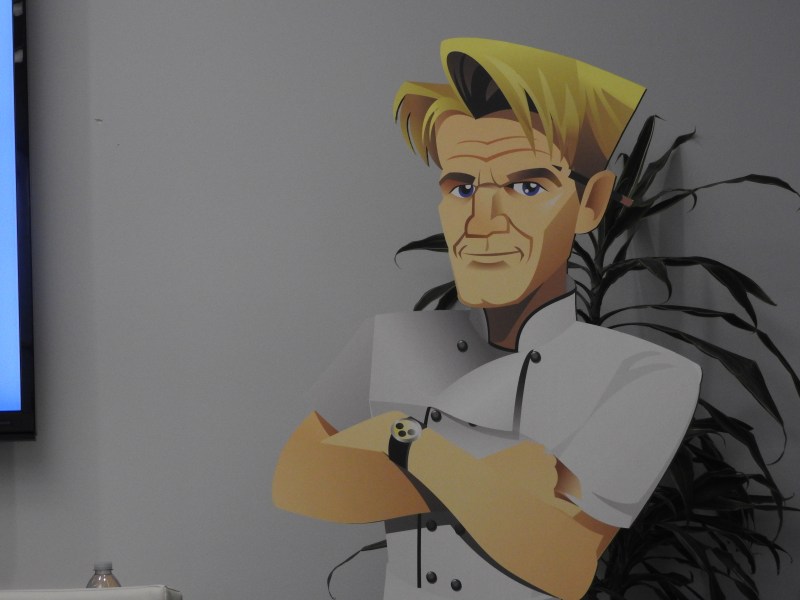 Ramsay noted that part of the fun is starting out as a poor and young chef, as he did in Paris in a neighborhood bistro in 1994. The China plates are lackluster, and the restaurant is drab. Over time, you have to upgrade everything about the place, train the staff, and oversee the production of the ingredients.

Asked what he liked to play, Ramsay said his kids drew his attention to the Kardashian game.

Asked why he did a game in the first place, Ramsay said, “I don’t think there has been a chef-tailored game out on the market yet. I started to cook for love, not for money. I’d like to see this game start exactly the same, and lead to building an empire.”