World famous chef Gordon Ramsay is getting a do-over in Glu Mobile’s kitchen. The celebrity’s mobile game is being renamed Restaurant Dash with Gordon Ramsay.

Ramsay’s game has generated $23.4 million in bookings since it was launched in mid-2016, but Glu hopes to generate more with the game’s reboot. The new game has more “Gordanisms,” or sarcastic and witty comments that are aimed at improving your performance as a budding chef.

You can send and receive gifts and messages (from Ramsay and the Diner Dash character Flo too) and complete group goals. You can share achievements and enjoy serving brunch in front of a life audience in New Zealand’s Waikato restaurant.

“It’s been an incredible response since launching my mobile game last year, and just like my restaurants and television programs, we’re constantly keeping concepts, menus and TV content fresh and exciting,” Ramsay said in a statement. “We’re taking it to the next level with Restaurant Dash with Gordon Ramsay, expanding it to include a fantastic community of players. I can’t wait for existing and new players alike to check it out.” 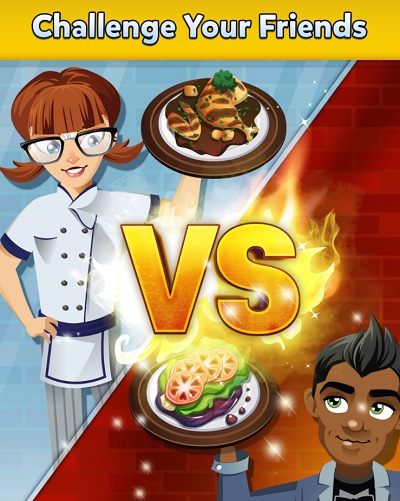 Above: Battle other chefs in Restaurant Dash with Gordon Ramsay.

In the game, you cook your way to success, traveling around the globe and showing off your skills in restaurants in a quest to build your own culinary empire. You can duel with Ramsay and others in boss battles, or trade items for better recipes.

Ramsay has more than 10 million followers across all his social-media accounts, and he is also regularly on television with his Hell’s Kitchen, Kitchen Nightmares, and MasterChef shows.

Under former CEO Niccolo De Masi, Glu pursued a bunch of deals with celebrities after the success of its Kim Kardashian: Hollywood game, which has generated huge returns. Glu lined up celebrities like Taylor Swift, Britney Spears, and Nicki Minaj — with a total following of more than a billion followers on social media. Not all of the games have been successful.

The Ramsay collaboration started in May 2014, when Glu acquired PlayFirst, a studio that created the Diner Dash and Cooking Dash games. Niccolo De Masi, CEO of Glu, approached Ramsay about making a title based on his celebrity personality, combined with the moment-to-moment, frenetic gameplay of the Dash releases. Ramsay said he started playing games like Cooking Dash while on long flights.