It’s been five years since the world got its first peek into the ethereal, mind-bending world of Gorogoa. Developer Jason Roberts and publisher Annapurna Interactive are debuting it on December 14 for PC, iOS, and the Nintendo Switch, and it’s been well worth the wait.

Gorogoa isn’t just the name of the game; it’s also the mystical creature that the protagonist spies when he’s a young boy. For the rest of his life, he’s consumed by curiosity — and perhaps obsession — and embarks on a long trek to finally decrypting the mysteries of what he saw. It’s a dreamlike, surreal journey through time and space as we visit him through various chapters in his life.

Much like its story, Gorogoa’s handcrafted art is evocative and surreal, transporting the player to a world just a little sideways of reality. Without ever saying a word, it references an entire culture and society, its invented symbols suggesting whole religions and myths. As the silent protagonist travels to and from various locations, the cityscape around him bears resemblance to real-life architecture but is slightly skewed and filled with little foreign details that allude to entire cities where imaginary people might be living their lives.

The most impressive thing about Gorogoa is that feeling of stepping through the looking glass. Even though you might think of expansive sandbox games or massively multiplayer online RPGs when the word “world-building” pops up, it’s unmistakable that Roberts has built a world here for his character to explore. Though we’re only offered a sliver of it in the game, the amount of detail in the game’s drawings gives your imagination plenty to mull over. 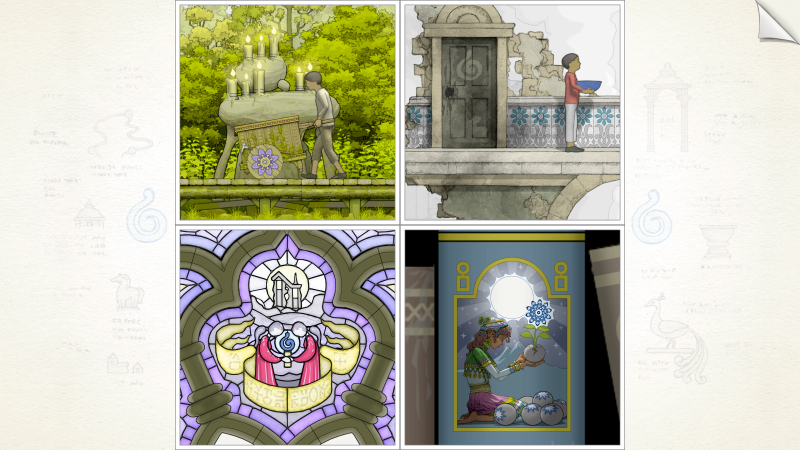 The puzzles are clever, and they make you feel clever when you figure them out. They feel like comic book panels, and everything takes place in a two-by-two grid. To progress through the story, you manipulate scenes that sometimes remain within their panel and other times span more than one. Other panels can be taken apart. For instance, one panel may depict a character inside a house, looking out of the window. Clicking and dragging splits it into two, one with the character standing outside, and the other with the now empty room.

Many of the puzzles play with perspective — zooming in and out to line up two panels so that one item can slide into the other — while others require you to activate mechanisms such as gears. They all fit into Gorogoa’s overall story. The gears, for instance, summon up the specter of ritual and the perpetuity of seeking the truth. Even the shifting perspectives echo the way the character is trying to find a way to look at the mystery of the creature from his childhood, searching for answers from within and without.

Gorogoa’s puzzles aren’t frustrating and they won’t make you bang your head against the wall. If you get stuck, the confined space of its four-tiled world make it so that you’ll eventually progress, even if it’s by process of elimination.

If anything, the puzzles are meditative. You can take your time clicking around the screen, walking around the environment and testing different interactions. When you find the solution, it’s satisfying to watch everything click into place. The world has its own internal logic, and even when you’re pulling objects from the dreams and thoughts of one panel into the reality of another, it all seems to make sense.

Gorogoa is short and dense, traversing deserts and temples and ruined cities within two or three hours of playtime. This might be too short for some folks, though in my opinion, it makes up for that with a tight story that explores a mystical world and themes of discovery, existentialism, and obsession. Still, the duration may be a sore point for some, especially at $15 on PC and Switch and $5 on iOS.

Gorogoa is a brief but beautiful foray into mystery. But its puzzles are elegant rather than elusive, relying on internal logic and a cohesive exploration of the main character’s psyche and the world around him.

The final achievement in the game is “Devotion.” It’s a word that can mean many things to different people. And experiencing Gorogoa may have the same effect, like interpreting a dream that you may not remember very well but seems to make sense anyway.

Gorogoa is out on December 14 for PC, iOS, and the Nintendo Switch. The publisher sent us a code for review.