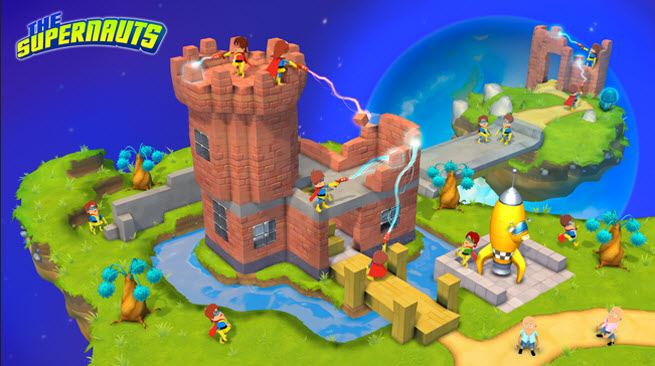 Grand Cru is announcing today it has raised $2 million in seed funding to build an online adventure game called Supernauts.

The company is entering a crowded field, but Grand Cru chief executive Markus Pasula said in an interview with VentureBeat that the company is trying to bring online entertainment into a more modern, cross-platform environment. Supernauts is the first in a series of games.

“We didn’t think any of the popular social games were very fun,” Pasula said. “The timing is perfect for doing something technically more advanced.”

Harri Granholm, creative director at Grand Cru, said, “It’s frustrating to look at the current state of social games when you know what’s possible in true multiplayer environments. We saw a huge opportunity there and set out to do it right. We want everybody to stop clicking cows and start sharing adventures and make things together. We think people are ready to try something more interesting.”  Supernauts is a persistent virtual world sandbox game where players can create their own puzzles, games, and hideouts.

The money for the Helsinki-based startup comes from Idinvest Partners and Playdom co-founder Rick Thompson, who has backed a number of social and mobile game startups recently.

The game is about superheroes, but it is non-violent, which means it will appeal to younger age groups. The superheroes go around the city solving problems. The title will debut simultaneously on mobile devices, the web, and Facebook. To be a true modern game, a title has to be available on the platforms where users want to play it, Pasula said.

Grand Cru was founded in May 2011 and has 11 employees. It’s headquartered in the bohemian district of Helsinki called Kallio, which has the most bars per capita in Finland. Rivals include Sony/Media Molecule (maker of Little Big Planet), Zynga (CityVille), Sulake (Habbo), Mojang (Minecraft), Roblox, and others.

Players will be able to create their own superhero or heroine and use a “zapper” to build or destroy environments block by block. They can create unique content such as virtual hideouts together. And they will be able to move to a new platform and pick up where they left off.

Pasula said the game has the same world-building features that make Minecraft so addictive, the user-generated content that makes Little Big Planet fun, real-time multiplayer, and a very approachable art style. The world is persistent and can be accessed via a web browser, from Facebook, and from mobile devices. For technology, Grand Cru is using the Unity 3D game engine on a custom C# server for the cloud.

The company’s original backer was Lifeline Ventures, which inveted in 2011. Guillaume Lautour of Idinvest Partners led the latest round. Other investors include Thompson; Nicolas Beraud, founder of Betclic; Anil Hansjee, former head of mergers and acquisitions for Google EMEA; and Henric Suuronen, former studio head of Wooga games. Finland’s public funding programs TEKES and the Nordic Game Program also provided support. Pasula said he was happy about how the funding came together.

Lautour said that Idinvest is actively looking to fund game studios in Nordic countries because of the well-known talent pool there. He heard from game industry veterans about Grand Cru and decided to reach out to them because of their reputation. He saw their demo at the time and considered it to be “really stunning” for a four-month effort. He said the technology choices made by the team were good.

Five of the founders, including Pasula, previously worked at Mr. Goodliving, a Finnish game developer, for more than six years. Real Networks, which owned the studio, closed it in 2011. Mikko Wilkman from Sulake, maker of Habbo, joined the crew to form the new venture. They got funding before they had a PowerPoint deck ready. The team conducted a lot of focus tests to find out what players really wanted in creating their own spaces within games.

Supernauts is expected to launch later this year on the web, iOS, and Android. Pasula said that he is very excited about tablet platforms such as the new iPad.