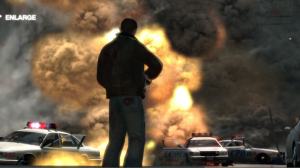 “Grand Theft Auto IV” is on its way to breaking records, despite a feared slowdown in sales.

Take-Two Interactive reported that it has sold more than 10 million copies of the controversial shooting game since it launched on April 29. The game hit the 10 milllion mark as of Aug. 16. Previously, the game had sold 8.5 million units as of May 31. So sales are slowing, but not as much as some feared.The figures are being closely watched because the success of GTA IV will determine how much Take-Two is worth in the ongoing takeover attempt by Electronic Arts.

For the three months ended July 31, Take-Two reported revenues of $433.8 million, more than double the $206.4 million in the same quarter a year ago. Besides GTA IV, “Top Spin 3” and “Civilization Revolution” helped drive profits to $51.8 million, up from a $58.5 million loss a year ago.

GTA IV hasn’t yet outsold its predecessor, “Grand Theft Auto: San Andreas,” which sold 12 million copies. Critics of game violence have lambasted it for the mayhem players can cause in the game, such as shooting cops. It remains to be seen whether GTA IV will keep selling or if it will slow down just like a blockbuster movie where a lot of people see it opening week but then attendance trails off.

Meanwhile, the industry continues to watch EA’s bid for Take-Two. EA let its hostilte tender offer expire on Aug. 18 but the companies are in talks about a possible sale. The episodic content for the Xbox 360 version of GTA IV will not arrive within the current fiscal year that ends Oct. 31. But Microsoft has said that the downloadable GTA IV content will be available this year.

A PC version is in the works, while a version of GTA IV, dubbed “GTA IV Chinatown Wars,” will be available on the Nintendo DS in the first fiscal quarter ending Jan. 31, 2009. Other big titles coming include BioShock for the PlayStation 3 and “Sid Meier’s Civilization IV: Colonization.”