Only one word can describe how I felt when I blasted Eddie Murphy’s “Party All The Time” from my car as the cops chased me down a busy boulevard: magical. In that gloriously random moment, Grand Theft Auto V gave the obscure ’80s hit new meaning, evolving from a cheap pop song into a rousing anthem of survival.

GTA V (out Sept. 17 on Xbox 360 and PlayStation 3) is full of such little details. The next entry in Rockstar Games’ blockbuster open-world crime series, reportedly costing $265 million to develop, puts you in control of three characters: Franklin, Michael, and Trevor. You’ll help them make a dishonest living in Los Santos, a satirical take on Los Angeles and the areas surrounding it. Anyone familiar with the real city will recognize the accurate but slightly skewed re-creations of places like Beverly Hills and the TCL Chinese theatre as you lie, kill, and steal.

While we’ll have to wait until Oct. 1 to see how GTA V’s multiplayer mode, Grand Theft Auto Online, turns out, the single-player content shows that Rockstar is once again the master of crafting believable open worlds. But pushing those boundaries does come with a cost. 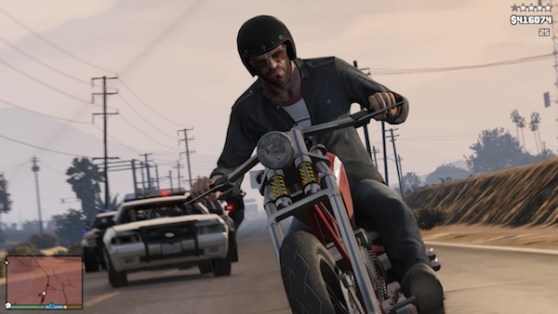 Above: You can now escape from cops by breaking their line of sight, as indicated by cones on your minimap.

Quenching your wanderlust
After a lengthy introduction, I grabbed a car and drove as far as I could just to see what was in store for me over the next couple of days. GTA V has the largest map Rockstar has ever made in any of its open-world releases. Los Santos is a city of contrast: Beautiful areas filled with expensive clothing stores, movie studios, and superficial pedestrians are just a few seconds’ drive away from the poorer (and more industrial) sections of the neighborhood, where police helicopters regularly comb through with harsh spotlights while gangs and drug addicts roam the streets.

If you get too tired of the city, you can head north toward Blaine County to see wind turbines, valleys, forests, swamps, deserts, mountains, and small towns. Various side missions, activities, characters, and beasts fill each of these areas as well. They look and feel as if people and animals have lived in them for years. Most impressive of all was the Pacific Ocean. Below its crashing waves and the rush of whitewater is a sea floor (complete with coral reefs and sharks) that you can explore at your whim. I’m still not sure how deep it goes, but I can’t wait to get back in a submarine and see the rest of it for myself.

That enduring sense of mystery is what makes GTA V so addicting. Even though I’ve already completed the story and spent almost 50 hours living in this world through the eyes of three characters, I’m still hungry for more. 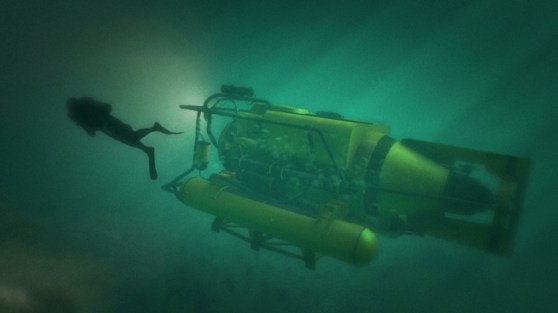 Above: Deep sea exploration is a first for the series.

Switching perspectives
The first six to 10 hours is the typical GTA experience of driving around town and accepting missions to move the story forward. It isn’t until the swap mechanic becomes available that GTA V starts to separate itself from its siblings. Except in cases where the story forces you to play as one character over another, you can take control of a specific protagonist at any time by holding down on the D-pad and bringing up the Character Wheel.

You’re not just switching one avatar for another. Franklin, Trevor, and Michael all have special abilities that are useful for specific situations. Michael’s power slows down time in combat, giving you a chance to take better shots; Trevor’s increases the damage he deals while decreasing the damage he takes; and Franklin’s makes him the ultimate wheelman, since he can drive cars with superhuman precision. The Character Wheel invigorates the process of traveling through the 49 square-mile land mass and gives you time to learn about the types of people who live there.

Heist missions
Swapping especially comes in handy during the heist missions, where all three guys plan increasingly complex crimes designed to steal valuable items from high-security areas. You get to choose how you approach these: go in loud with guns and vehicles, or take a stealthier approach, sneaking in and out. You also pick additional crew members — gunmen and drivers — to aid you. I expected to see more customization options, but GTA V gives you enough agency to make you feel like you’re the mastermind behind those operations.

These missions aren’t too difficult, but knowing when to switch to the right guy at the right time is crucial if you want to make a clean getaway. Having to worry about the lives of three characters instead of one makes the outcome even more gratifying. 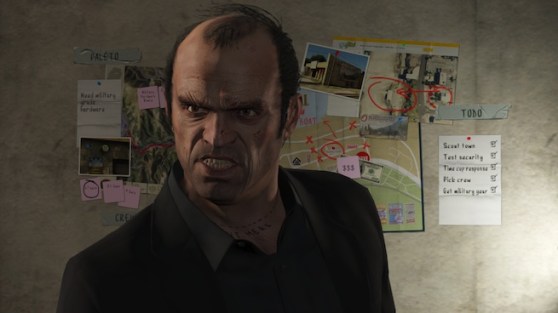 Above: Heist plans are always visible from your corkboard.