You’re not really flying. To quote Woody from Toy Story, it’s more like falling with style.

You see, in Gravity Rush 2, you have the power to change the direction of gravity for yourself. So you can turn up into down, making you “fall” into the sky. Or you can tilt the world just so, enabling you to slide along rooftops or even the sides of buildings. You could also pick up nearby objects in a gravity field and send them flying as projectiles.

I’m not sure why you’d need any more selling on Gravity Rush 2, an open world game (and PlayStation 4 exclusive) from Sony Interactive Entertainment’s Japan Studio that comes out on January 20. I was a big fan of the original, which came out for the portable Vita in 2012 (and got a PlayStation 4 release last year). Just like the first Gravity Rush, the sequel lets you fall through a gorgeous world of mystery.

But Gravity Rush 2 is a much bigger game. 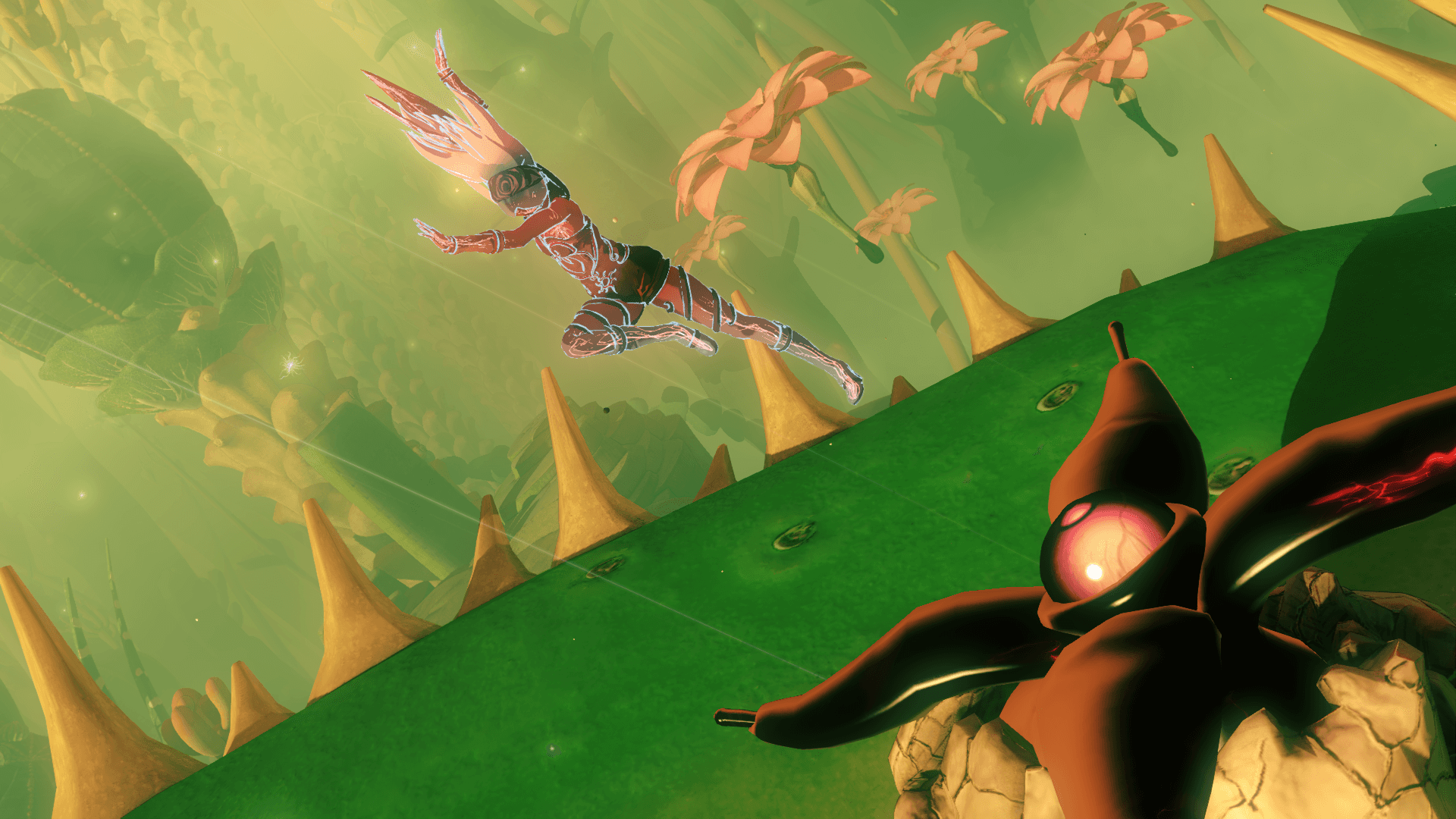 Above: Right in the glowing orb.

When you think about an open world, you probably imagine a large flat land mass like a large plain or a city. In Gravity Rush, your virtual playground is a series of floating islands. Some are as small as a one-person boat, and others hold entire districts. And this is a vertical world. Islands don’t rest side-by-side — they can also be hundreds of feet above or below you.

You’re not just getting in a car and driving to where you need to go. You’re going full-on superhero and flying (ahem, I mean falling) there. It’s a unique and interesting way to travel. Even after dozens of hours, the simple pleasure of floating through a market or diving far down to a new objective never got old.

It helps that you get to take in so many beautiful sights while you’re travelling. Gravity Rush 2’s locales are a special kind of fantasy, taking inspiration not in the usual medieval or Japanese tropes, but instead having a more industrial European feel. It’s almost like steampunk, but it’s not quite as dirty and, well … steamy. And it really is a big world. Altogether, it’s easily twice as massive as the open world from the first Gravity Rush.

The music adds to the beauty. The soundtrack deftly moves from epic orchestral arrangements to smooth jazz and electric rock, each fitting the beats of the story or action. It all comes together in a glorious visual and audio presentation. 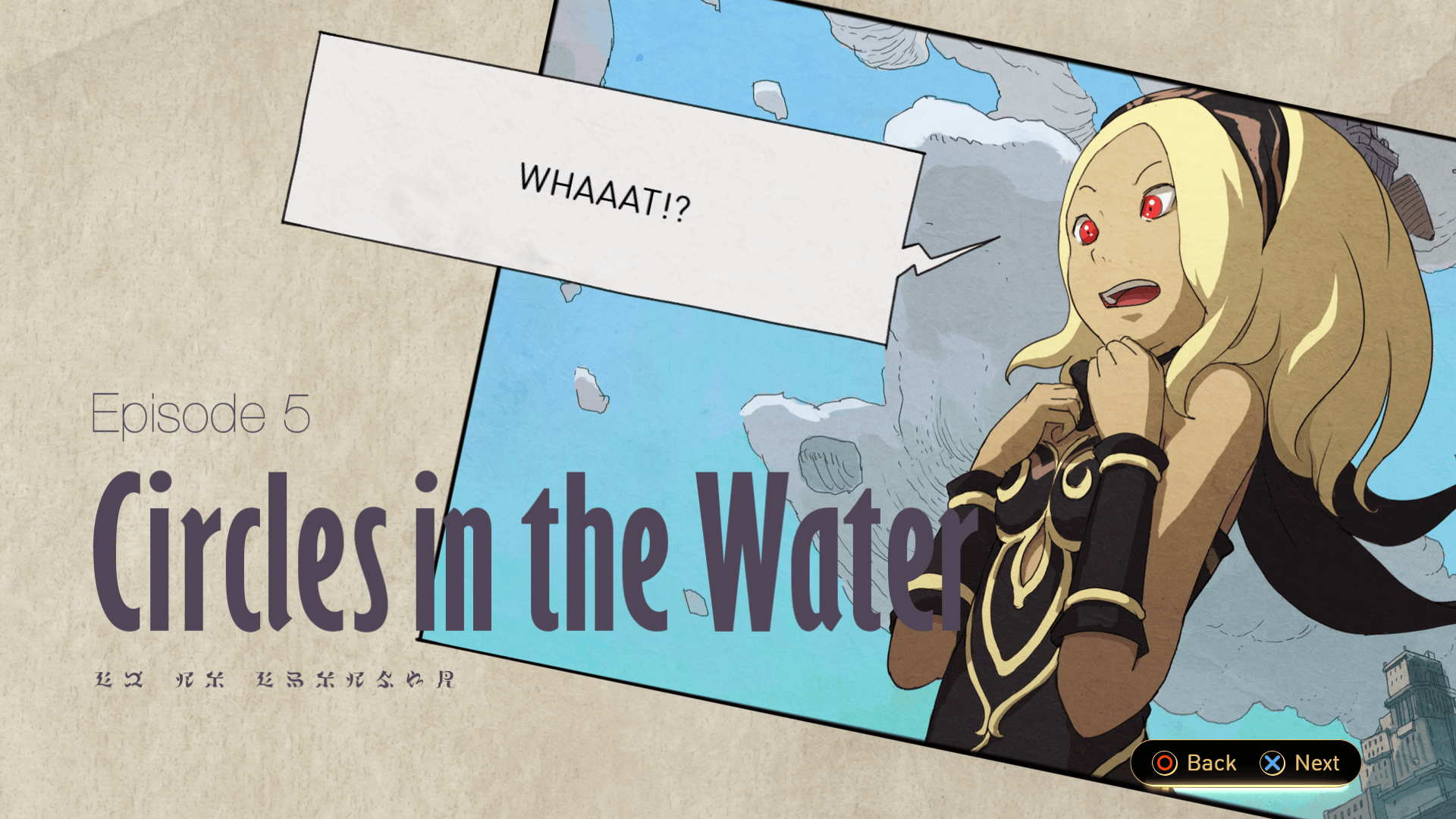 Above: Gravity Rush 2 uses a comic book presentation for most of its cutscenes.

Being the Gravity Queen

In Gravity Rush 2, you play as a Kat, a “gravity shifter” who has the rare power to do all of that floating and falling I’ve been talking about. Her powers offer a different experience from the usual gun-shooting or sword-swinging that makeup most other open world experiences.

Kat can do a lot. She fights with a more traditional melee style on the ground, but she also throws nearby objects at enemies, and flies through the air to deliver soaring kicks. And that’s just for combat. Kat can float, climb up buildings, slide through the world, and (of course) fall anywhere she pleases.

Most of these tricks are similar to her arsenal from the first game, but Kat learns new forms that slightly change her appearance and alter her abilities: one that makes her lighter while the other makes her heavier. In her lighter form, she can jump higher and teleport directly at enemies, which is especially useful against quick, flying foes. The heavy form has stronger ground attacks and is able to charge up a missile kick that can do damage to a large group of enemies. Changing forms is a fun way to add variety to combat.

You’ll use all of these abilities in a variety of missions that’ll have you do serious tasks like saving the world by beating up some bad guys or more light-hearted ones like being a stunt person in a movie. These come in both story missions and side activities.

Don’t let that whole “side” thing full you, though. These missions often have just as much story content, dialogue, and unique gameplay as the main ones. They just don’t progress the main plot. You’ll find a ton of them, almost three times as many as there are story missions. 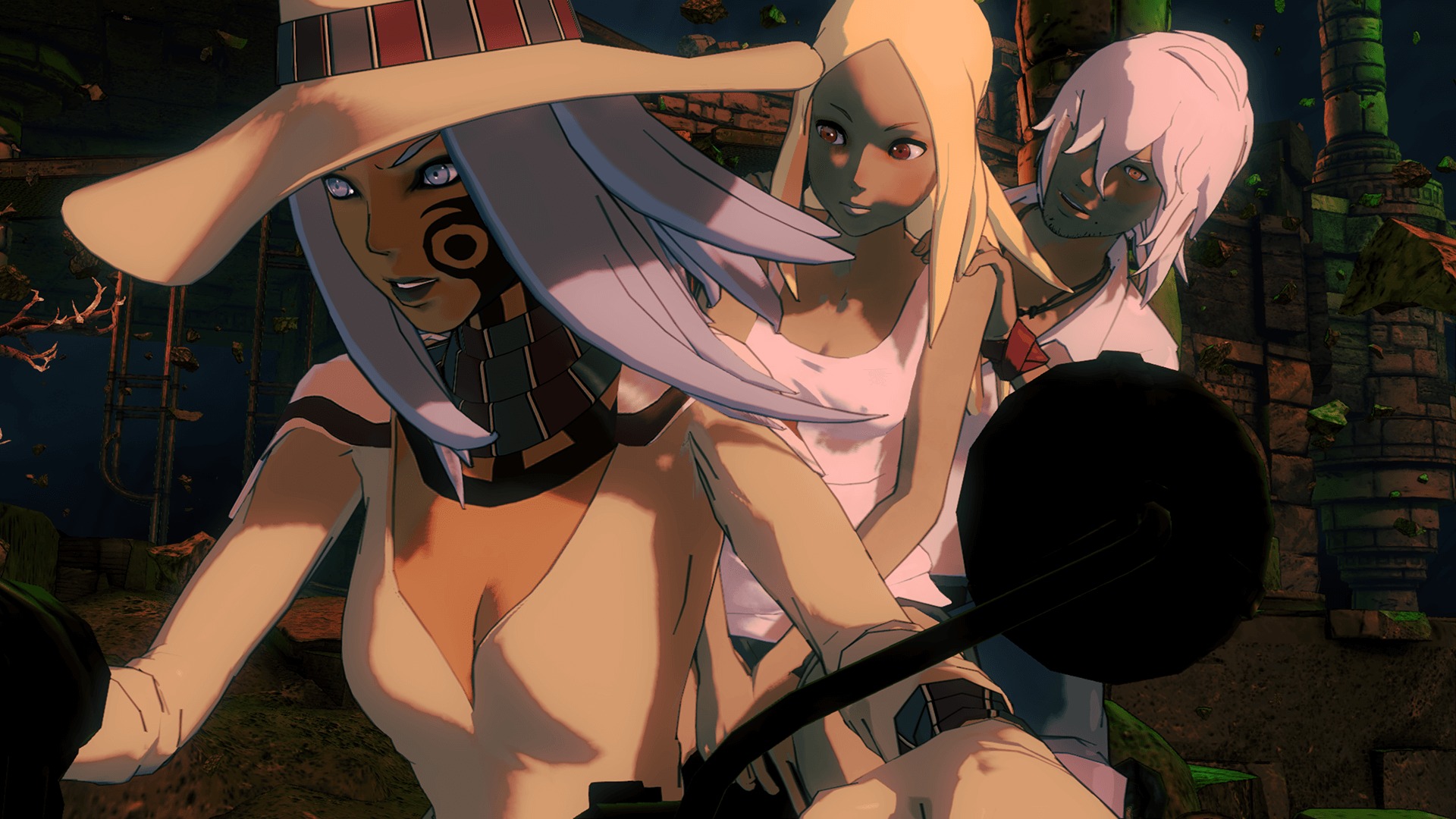 And if you’re looking for less story-focused content, you can also do more straight-forward challenge missions. These are more like score attacks, but the game will reward you with ore if you beat them (which you can use to level up your abilities).

You can also earn ore from mining missions, which send you down into special locations filled with deposits that you can kick open. But the best way to find ore is to just float around the city, searching for the hidden gems scattered under and around the world.

While doesn’t Gravity Rush 2 doesn’t have traditional multiplayer, you can still interact with other players. You’ll occasionally find treasure missions, which will show you a screenshot that another player took of a location near a treasure chest. Not only will you earn goodies by finding the treasure, but you can then take your own picture to help out a future player. You can also task friends or strangers to beat your scores on challenge missions.

Basically, Gravity Rush 2 has a lot to do.

With all of those missions, it’s inevitable that some are more fun than others. But some are just a drag. Sometimes you’ll have to wait around for a non-player character like a dog to lead you somewhere, which they’ll take their sweet time doing. You’ll also have to take part in awkward stealth missions or, worse, trail someone, keeping your distance while trying not to be spotted. Gravity Rush is at its best when it’s fast and exciting, something that doesn’t translate well to sitting around and waiting for something to happen. 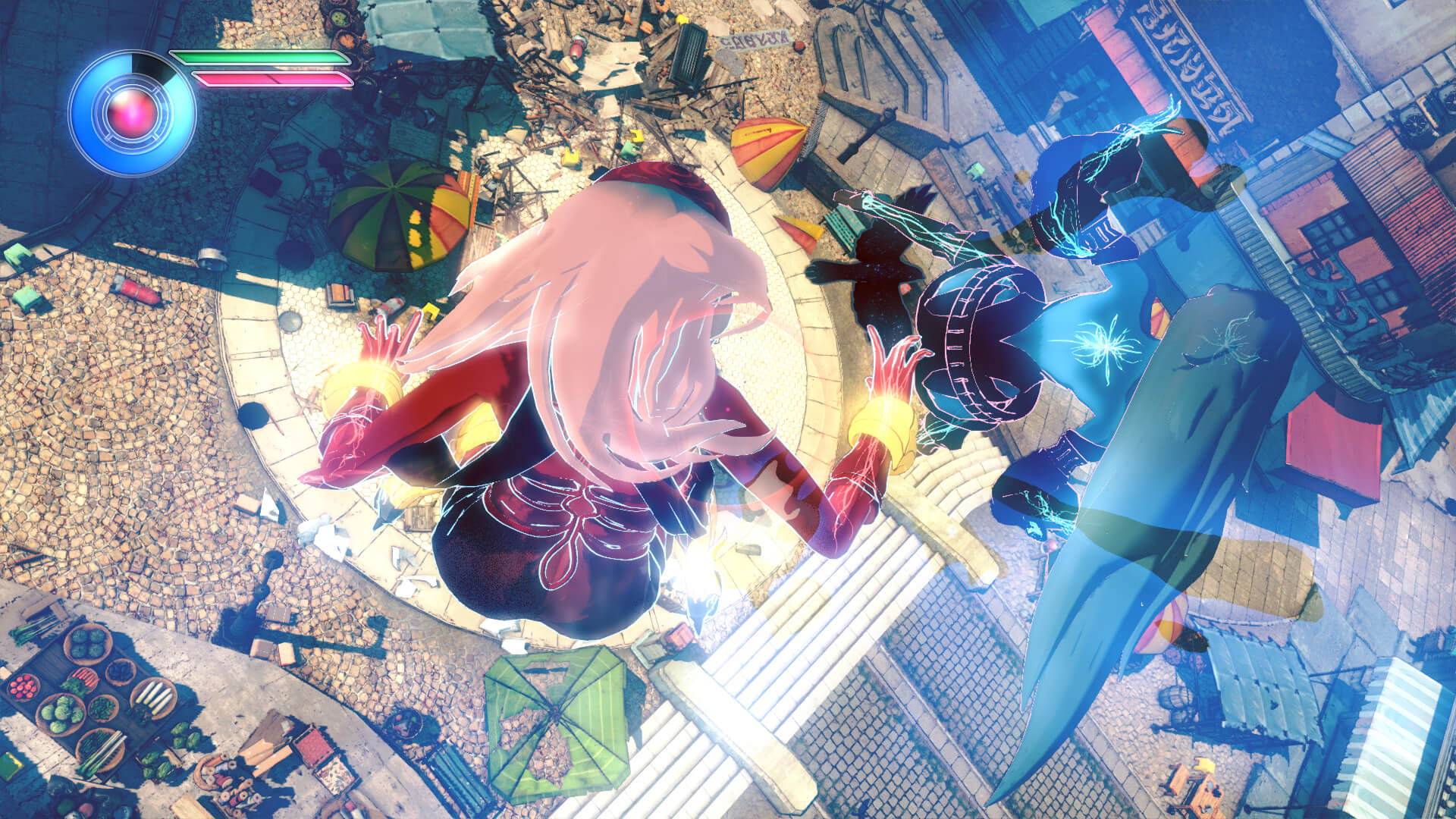 Above: So much to see.

The game is gorgeous, but that huge world comes at a cost. While you can move through the entire map without encountering a loading screen, you’ll notice a lot some objects suddenly appearing while travelling. So, you’ll see a building far off in the distance, and as you get closer more details — like trees, benches, and people — will just materialize. This pop-in can be distracting, but it becomes especially annoying when you’re looking for ore. You have to get pretty close to a building before the ore actually becomes visible, so you can’t just find a good vantage point and scope out your surroundings for the valuable currency.

Just like the first game, Gravity Rush 2 is a huge adventure that stands out for its fanciful world and unique abilities. You have a lot more to do in this sequel, and the story (without giving anything away) takes you on a memorable journey with likable characters.

It’s a much bigger game than the original, giving you plenty of land to explore and tons of missions to beat. It feels so much different from your typical big-budget console game these days. It’s more of a comic book than an action movie, allowing players to delight in their own heroics. It’s one of the PlayStation 4’s most stunning and entertaining exclusives.

Gravity Rush 2 is out for PlayStation 4 on January 20. The publisher sent us a copy for this review.