This new, ongoing series covers tabletop board or card games that video gamers should dig. 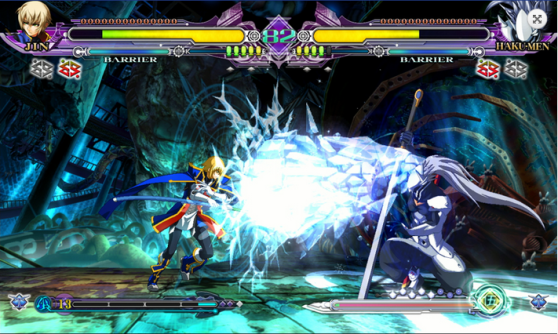 Above: BlazBlue inspired the creation of the BattleCON games.

If I were a cold-hearted businessman at Level 99 Games, I’d be scolding the designer of Devastation of the Indines, screaming something about, “Brad, you’re cutting into our profit margins! You’re giving away too much content!” Yes, this hefty box comes with a hefty price tag — $75 ain’t cheap. But even the consumer/gamer in me thinks this package is a bit overloaded. It has more modes and variants than I can reasonably play considering my working-adult lifestyle.

But let’s forget about all the extra content for a bit and just focus on the base game, which is fantastic on its own. BattleCON, which stands for Battle Connection Fighting System, simulates a 1-on-1 brawler. Think Street Fighter II or IV. Or Street Fighter: The Movie (the game), if that’s more helpful to you.

Just as in those classics, two players (by default — other modes support more) select characters to go head-to-head with. They get a small handful of cards to play: Some of these are “styles” that are unique to each fighter, while others are “bases” that are common to everyone. Each round, the players select one style to go with one base, combining the two to form an attack. For example: 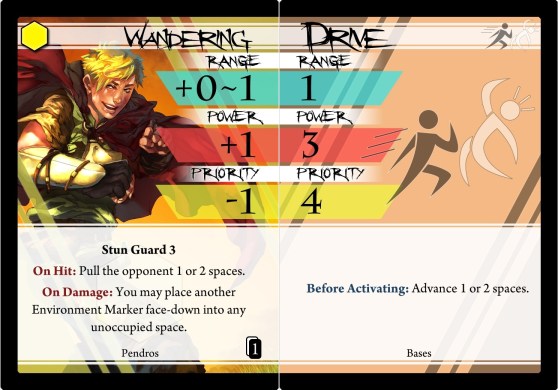 Above: An example pairing of a left-side style card to a right-side base. This “Wandering Drive” attack has a total range of 1-2 spaces, power of 4, and priority of 3.

The two sides then simultaneously reveal their choices and then work out the clash by resolving factors like the priority scores, range, and other triggers (like you see on the cards above and in the image gallery below).

Yes, this means the gameplay has a bit of a guessing element to it, since everyone plays their cards at the same time and don’t react to other moves in the same turn. But this dynamic has more strategy than you might think.

Just like in fighting games, players have to adjust to the situation at hand, which is constantly changing, all while trying to outwit the opponent. Do you sense that your foe’s about to launch a massive-damage grapple attack? Then perhaps a quick retreat to get out of range is the appropriate play. Or if you feel the other fighter’s going to pull back to do a distance attack, you can close the distance to counter.

Above: The board shows how two fighters are positioned against each other.

Devastation (and its prequel, War of the Indines) plays and feels so much like a card-game simulation of a fighting video game, I had to ask its creator what he drew his inspiration from. His response was … pretty hardcore. “I’m a big fan of Atlus fighters,” BattleCON designer D. Brad Talton, Jr. told GamesBeat. “Guilty Gear, BlazBlue, Persona 4 Arena — I’m very excited about the revival of Guilty Gear coming next year. I also play a lot of niche fighters: Skullgirls, Melty Blood, Arcana Heart. And of course, I know my way around Street Fighter II-IV, Street Fighter X Tekken, Capcom vs. SNK, Marvel vs. Capcom 2 — don’t touch much of 3 — and King of Fighters from ’01 up to XIII.”

OK, OK, we get it. The guy plays a lot of fighting games. But he does point to one when it comes what’s influenced him the most for his tabletop gaming designs. “My biggest inspiration for BattleCON was probably BlazBlue,” he said, referring to quirky 2D fighter from Arc System Works. “For anyone who’s played it, it’s pretty easy to see how the different character powers became the basis for BattleCON.”

Actually, checking out the different character powers in Devastation could take quite some time because it comes with a whopping 30 fighters. And they all have their own sets of character-specific style cards, superattacks, and extra props that represent special powers, environmental effects, wearable artifacts, and more. We’re only half-joking about it being too much, since more is always better. But that’s a massive amount of content to play through. (At least the game divides everything up into digestible chunks based on difficulty, so you can save the more advanced characters for later.)

And that’s just the basic game and its default 1-on-1 matches — we haven’t even gotten to all the extras yet. In Devastation, you can play with buffed-up versions of each of the 30 characters, with super buffed-up versions, in teams, in cooperative fights against bosses, and with settings and stages that can change mid-brawl. Perhaps most surprising of all, this set also comes with a complete role-playing-game-like campaign, with “computer”-controlled enemies, dungeons, branching paths, and a light story with multiple endings.

It’s almost laughable, then, that this game already has a separately sold expansion: Strikers, which offers more cards for tag-in partners during fights. Yeah, like Devastation needs even more content, Brad.

Bottom line: Kickstarter backers have pushed through two BattleCONs now and for good reason — they’re a lot of fun and really capture the spirit of fighting games. It may be difficult to convince you that Devastation is worth the $75 asking price, but if you get a chance to sift through the box, you’ll understand why — it’s just packed with good stuff to play.

Special thanks to Talcon and Nich Maragos for research help on this one.