Video games that Castle Dice reminds us of: Minecraft 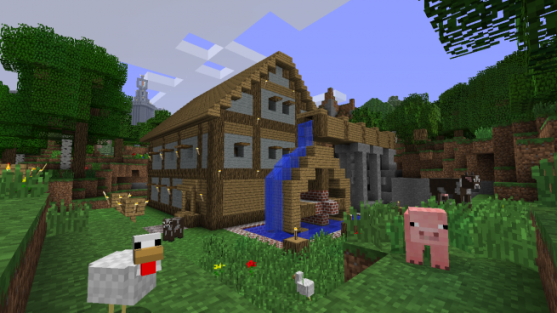 Above: Castle Dice started life off as DiceCraft, a tabletop version of Minecraft (pictured).

It’s hard not to root for the guys at Fun to 11. Two years ago, the independent tabletop game designers attended MineCon, a convention in Las Vegas dedicated to Minecraft. There, they pitched a new idea: DiceCraft, a physical, dice-based version of the megapopular do-and-build-whatever-you-want sandbox video game. They wanted it to happen. They created a prototype. They showed the game off to convention attendees. They negotiated with Mojang, the creators of Minecraft. They even handed out “dirt-block brownies” and “creeper cookies” — sweet treats themed after aspects of the video game.

But fast-forward to today, and you won’t find DiceCraft on any store shelves. “We tried really hard to get the license from Mojang for Minecraft — we even ran demos at MineCon,” Castle Dice designer Luke Peterschmidt told GamesBeat. “But in the end, we were just too small of an outfit for such a big license. I have to say that they were very cool about the whole thing, though, and I totally understand their decision.”

So Fun to 11 did the next most logical thing: take the game to Kickstarter. Peterschmidt took out the Minecraft references, retooled a few bits, and then pitched the rebranded Castle Dice on the crowdfunding platform almost a full year after his visit to MineCon 2011. Interested gamers backed the project at $44,581 — over $11,000 over its initial goal — and helped make Castle Dice a real product that you can now buy online or in game stores. 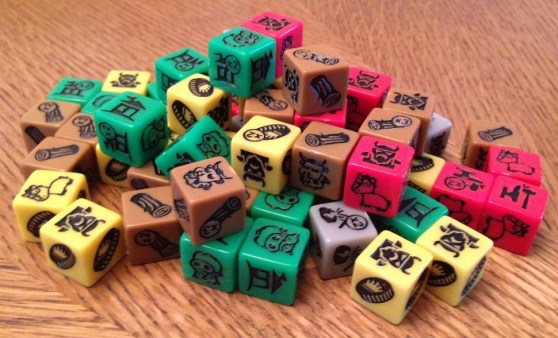 Above: Castle Dice comes with 64 of these suckers, with more to come in future expansions. Some of the artwork seems a little mismatched (the minimalist barbarian looks very different from the cartoony farm animals, for example), but that’s a small complaint.

In Castle Dice, you collect resources like wood, stone, or gold to build structures (which provide bonuses or victory points), just like in Minecraft. Or you can use the goods to recruit villagers (who primarily help increase production or protect from raiding barbarians). You can also gather animals that give special powers to the player who owns the most of a certain type (most chickens, for example, let you hold more cards in your hand).

But that’s the really boring way to describe Castle Dice. What makes it so fun is its unique dice-rolling-to-dice-drafting mechanic. Each round, players grab a specific set of them — different colored dice provide different ingredients, like brown for wood, for example — and then roll them all together into a huge, shared pool. So, counterintuitively, you don’t roll to see what you get. Rather, you roll to see what the world gets. It’s sort of like using dice instead of lines of code to procedurally generate the materials in Minecraft’s open world.

Then, players take turns drafting (grabbing) one die at a time to meet their own construction needs. Some dice will offer up more than one resource, some will give an animal — it’s up to everyone to secure what they want before their opponents can get to them.

It’s a different take on resource management in a tabletop game, but it works well. Because everyone is rolling at once, the rounds move along at a brisk pace. And while you’re mostly creating and building things, Castle Dice provides just the right amount of player-to-player drama as everyone fights over the limited dice on the table.

In the end, whoever managed their resources, buildings, animals, and villagers to get the most victory points wins.

Bottom line: Castle Dice is fun game with easy-to-understand mechanics, heavy dice rolling, and a family-friendly theme. Just be warned that “family friendly” may go away once you start yelling at other players for grabbing that red iron x2 die you’ve been eyeing.