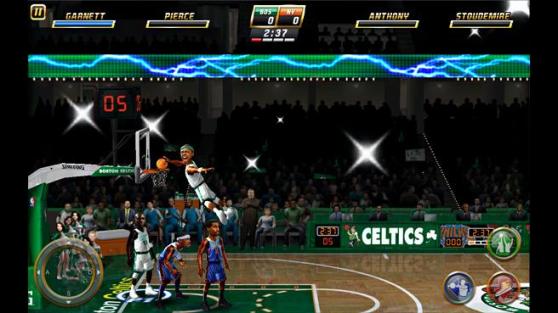 Above: Fightball is a more action-heavy brand of basketball, similar to NBA Jam but in a real-time, card-game form.

Brawl and Fightball are real-time card games, meaning you don’t stop for your opponents to take their turns. You just keep playing cards as fast as you can until you win or lose. But for your first time playing, the Brawl instructions advise you to skip the real-time play and just take turns, like your average tabletop game.

This is both a fantastic and terrible idea.

It’s fantastic because this is obviously the best way to learn the games. It’s hard to teach a friend how to play when you’re frantically slapping down cards every 0.7 seconds. It’s terrible because this warm-up demo gives an awful first impression. The first time I tried a turn-based Brawl, I thought it was incredibly dumb. But the “ohh, I get it now” moment clicked on the very next, full-speed match.

In Brawl, you and your opponent fight 1-on-1 to take control of a few “bases” on the table. You draw one card at a time from your deck and must make a quick, near-instant decision on whether to play or discard it. But you must choose quickly, because the other player isn’t waiting for you to decide.

You usually play colored “hit” cards on a base — once you play a specific color, you can’t play any others on that side of that base until they’re wiped out by “clear” cards. If you can end up getting more hits than your opponent when you “freeze” the base, you will score it. Meanwhile, the other guy’s trying to outscore you with his own hits, “blocks” to prevent more hits, “reverses” (so a lower score wins instead), and more.

Think of it as the popular family card game Uno, only played without pause and as if it were a fighting game like Tekken. 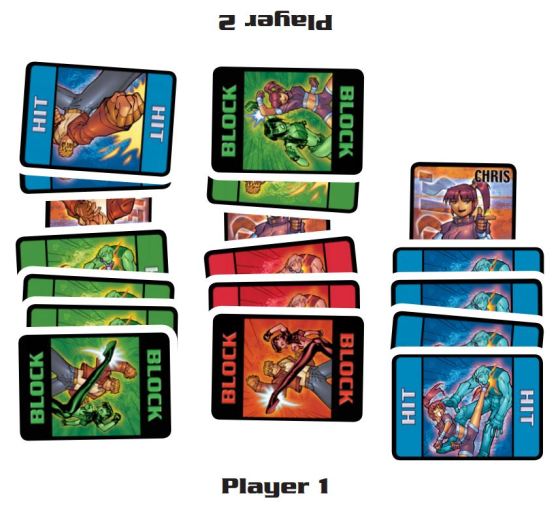 Above: A sample playing field of two players fighting over three bases.

Fightball has the same real-time mechanics as Brawl, but two players battle it out in an aggressive, basketball-like matchup. You play cards on various spots on the court, trying to succeed at a shot by having the right athletes matched with the right supplemental cards. For example, if you set up a player with good dunking skills near the basket, then play the matching-colored “ball” and “shot” cards on top of him, you can score that attempt.

But similarly to Brawl, your opponent is making their moves at the same time, without any stoppage in play. They may be trying to score while playing their own blockers to stymie your shots. 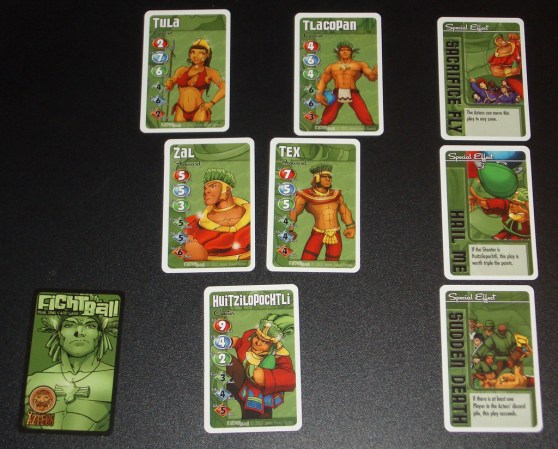 Above: A few cards from the Aztecs team in Fightball.

Bottom line: This is just a simple overview; Brawl and Fightball have a bit more strategy to them than what I described here. But just a bit. They’re both extremely family friendly and easy to play, and they’re cheap and deceptively entertaining. You’ll certainly have a few laughs when you’re rushing to play cards on the table, trying to outplay your opponent who’s doing the same. Inevitably, you’ll make a mistake. That’s all part of the fun, however, and the next match is only a few seconds away.

Special thanks to KublaCon, where I discovered these games.