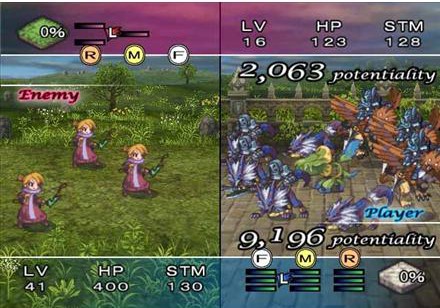 Above: Soul Nomad & The World Eaters, a strategy role-playing game for the PlayStation 2.

D. Brad Talton, Jr. knows just the right things to say to us, the video game press. Check out what the tabletop game designer from Level 99 Games told GamesBeat about his series: “Pixel Tactics‘ combat was inspired primarily by Soul Nomad. You can see a lot of that in the way the units have different placements and positions. Disgaea was a big influence [as well] for me in terms of aesthetics and style of play.”

OK, so the man’s got gamer cred, name-dropping two hardcore Japanese strategy role-playing games like that. And it’s definitely not just talk. You can see it in his products. (In our article about Talton, Jr.’s Devastation of Indines card game, he referenced BlazBlue, Skullgirls, and many other not-so-mainstream fighting games.)

Pixel Tactics is a small-box card game that strips that strategy-RPG experience down to its essentials. No convoluted story. No drawn-out, can’t-skip-fast-enough dialog. No overworld exploration. Just a diverse line-up of characters who fit together in different ways for fun, tactical combat.

In Pixel Tactics, two players go head-to-head, each armed with a deck of 25 cards that represent different combatants: knights, illusionists, healers, mystics, assassins, trappers, and so on.

Each player selects one of those from his opening hand to become the leader and the most powerful unit on his team (if it dies, then that side loses). All the other cards each show four different characteristics: Vanguard, Flank, Rear, and Order. Which one they take on depend on how they enter play. 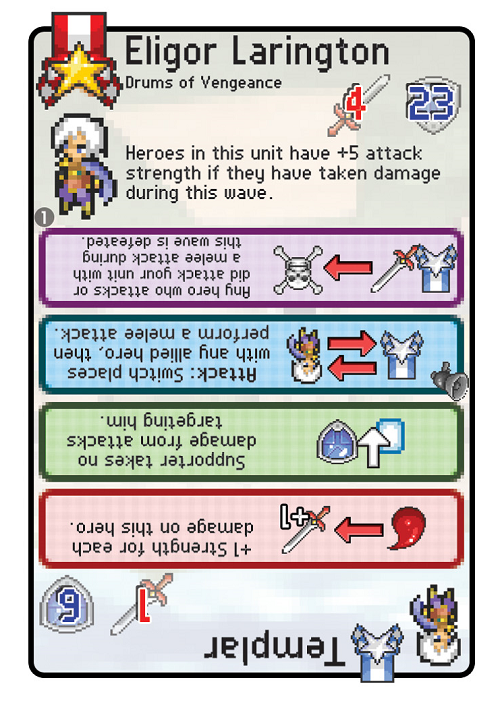 Above: A Templar card as a leader, only using the top part that’s facing right-side up …

Each side has a 3×3 grid that makes up a playing field. If a player places a fighter down in the front row of this grid, closest to the opponent, then it becomes a Vanguard hero and uses the Vanguard power on the card. These troops are usually responsible for frontline offense (melee attacks) and defense (protecting those in the columns behind them).

If the player puts a card down in the middle row, to either side of the leader who’s sitting right in the center of that grid, then it becomes a Flank hero and uses the Flank powers on the card instead. These are generally versatile with some offense or support-based abilities.

Units that go in the last row become Rear heroes and use the Rear abilities on their cards. These can can offer healing, support to the forward troops, or long-range attacks.

The fourth ability listed on each card is an Order. If players play these, then they’re using a more general power that can benefit their side (or hurt the other) rather than using that card as an in-the-trenches character. 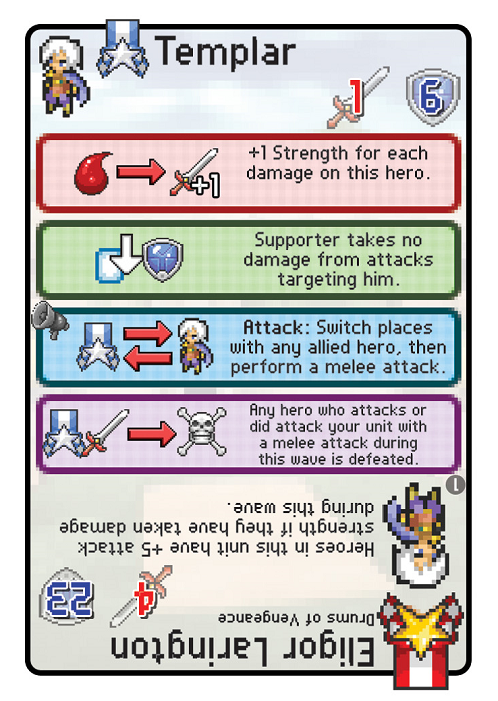 Above: … and a Templar rotated to the other side to function as a normal card. The four powers listed in the middle correspond to Vanguard, Flank, Rear, and Order abilities, in that order. In this case, if a player uses this card as a Flank Templar (placed in the second row of the 3×3-grid playing field, using the second power above), then this unit would protect the one standing right behind him.

So every time a player takes a turn, he must decide which cards to play and, if not as Orders, then where to place them. Both decisions can greatly affect what shows up on the battlefield. A gunner card can be a Vanguard gunner, a Flank gunner, or a Rear gunner — and they’re all very different from each other.

The number of options that you have on each turn can be almost overwhelming. But that’s the whole point of Pixel Tactics. We don’t play strategy RPGs for casual and linear tactical experiences, right? And looking at his designs here as well as the video games that he loves, Talton, Jr. doesn’t, either.

Bottom line: Pixel Tactics is very light in physical stature — one box of 50 cards has everything you need — but heavy on strategy without being heavy. Players always have a lot of interesting and fun options to choose from, but this can be a bit much for those who get “analysis paralysis” while tabletop gaming.