This new, ongoing series covers tabletop board or card games that video gamers should dig. Check back for more installments in the future!

Above: Puzzle Fighter, not to be confused with Puzzle Strike

Puzzle Strike is essentially an unofficial tabletop version of the classic gem-building/smashing video game, Puzzle Fighter, from Capcom. It even stars a crew of super-deformed fighting-game characters from the Fantasy Strike universe, similar to Puzzle Fighter’s Street Fighter cast. That’s no coincidence since the same guy, David Sirlin, designed both games (and he was a designer on Street Fighter II as well).

In Puzzle Strike, each player has a “well” that’s constantly filling up with small gems. If the well fills up, he loses, so he must survive by combining small gems into bigger ones, then sending those over to opponents instead — just like in Puzzle Fighter (or most other “colorful things dropping on your screen” puzzle games).

Mechanically, however, Puzzle Strike is more similar to the genre-defining Dominion card game, which popularized the deck-building genre. The idea is, players start off with weak decks but reinforce them by buying more and more powerful cards as the match goes on — cards that give more income, powers, or actions than the starting hand can offer. This isn’t to be confused with customizable card games (CCGs), in which participants create and set their decks before a session starts.

These chips are made out of heavy-duty cardboard. They’re not plastic or clay, but they are of such high quality that we wish someone would invent tiny, circular sleeves to protect them from long-term wear. Players reach into a bag to grab a set number of playing pieces to form their current hand, then use them to buy new and more powerful chips for future draws, combine or attack with gems, or chain together multiple moves for high-damage combos.

As those wells fill up with gems, the intensity level rises — and not just because people are about to be knocked out of the match. In an interesting twist, Puzzle Strike players actually become more powerful the closer they are to losing. The higher the level of gems in his well, the more chips that player gets to draw and play. This leads to exciting, momentum-changing plays and big comebacks. 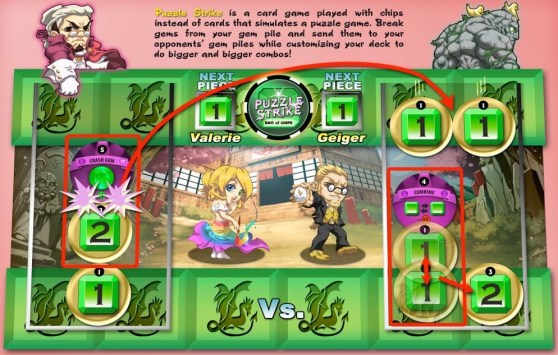 Above: A sample of Puzzle Strike‘s play (click for a larger view)

The base set (currently: Puzzle Strike: 3rd Edition) comes with 342 chips, but only a portion of those are in play for any single session. With the different possible setups plus several variations (including two-on-two team play), the game boasts 411,863,740 different starting combinations. We’ve tried fewer than 0.00001% of those so far, but that hasn’t stopped me from rushing out to buy the expansion Puzzle Strike Shadows, which brings in another 342 chips. (Some of those are redundant with the base set’s, however, since Shadows can act as a standalone game and uses some of the same basic gems.) Puzzle Strike is that fun.

Interestingly enough, while Puzzle Strike is extremely accessible and enjoyable to play — one of our favorites we’ve tested for this series of articles — it’s deceptively deep. Deep enough for Sirlin Games to release a full 100-page strategy guide containing detailed tactics for each character. Your friends may tease you for owning a hint book for a cartoony-looking tabletop game — mine most definitely have — but use the extra victories to shut them up.

Bottom line: Don’t overlook this deck-building game just because it looks a little unconventional and doesn’t use, well, decks. It’s more fun than Dominion and is a near-perfect tabletop representation of the beloved Puzzle Fighter.