Video game that Small World reminds us of: Risk 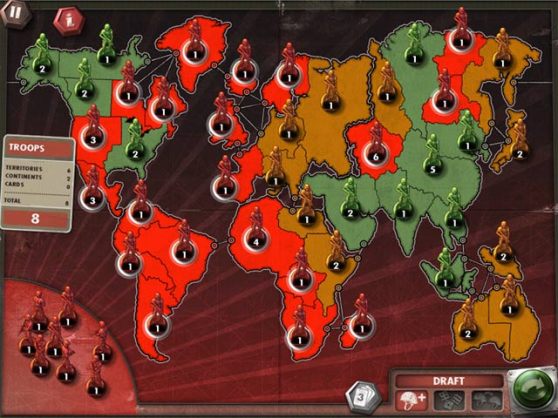 Above: Small World is Risk (pictured here) with fantasy creatures and magical powers. Yes, it’s a nerdier take on something that was already nerdy in its own right.

Yes, we know Risk was a physical product long before it turned electronic. So saying that Small World the board game reminds us of Risk the video game is sort of cheating for the purposes of this article. But we’ve been playing Risk on computers and consoles for literally decades now, so it’s hard not to consider it a video game. And hey, this is our story, our rules.

We went there because Risk is the perfect comparison to make. In it, armies conquer regions on a map, encroaching on enemy territory until someone has taken over the world. In Small World, fantasy-novel creatures like trolls, dwarves, giants, and ghouls butt their ugly heads. But rather than seeking global domination, all they want is a little bit more elbow room in a relatively tiny and crowded plot of land — even if it takes genocide to get it. It’s a small world after all (sorry). 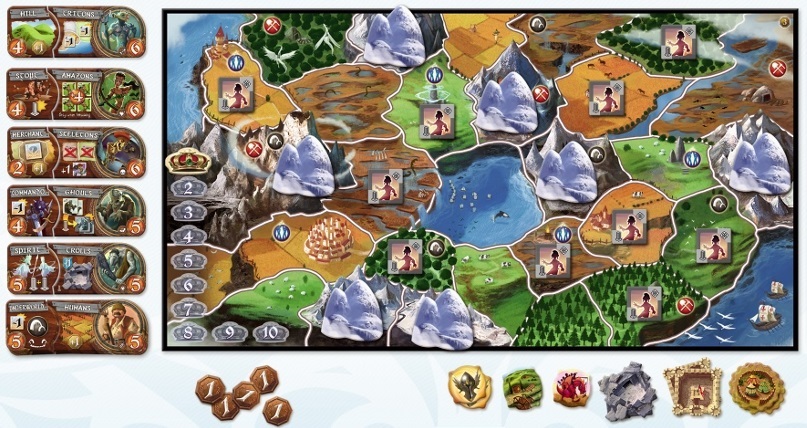 Above: A sample three-player setup, with gray, neutral tribes already populating the map. On the left, you can see the six available power/race combinations that players can purchase.

Similar to Risk, Small World gives players piles of troops (represented by small cardboard tiles) to push into new sectors, but the math here is simpler. Very generally speaking, one of your units takes out one of the enemy’s, so as long as you have a few more warriors in your stack, you should be able to advance.

This isn’t just “Fantasy Risk,” though. What makes Small World so beloved by board gamers is its myriad of different styles of play.

During setup, you shuffle the base game’s 20 powers together with the 14 races to create different combinations of armies. Only six of these combos, however, are for sale at any point. Once a player recruits one of these teams, he removes it from the market, becoming its sole owner. No one else will have access to that particular group until it goes completely extinct, at which point it goes back into the pile for possible future recruiting.

The specific mixes make all the difference. For example, the “Dragon Master” power allows its owner to use — what else? — a dragon to conquer new regions with only one unit. But the different races come with their own defining characteristics, too. So if Dragon Master is paired with Skeletons, then you get “Dragon Master Skeletons,” and the player who runs them receives the Dragon Master power plus the Skeletons’ special ability to multiply as they take over more real estate. If Dragon Master were attached to Wizards instead, then you’d have “Dragon Master Wizards” — the giant lizard plus the Wizards’ bonus of getting extra victory points for occupying magic regions.

Above: Left-side power tiles fit with right-side race tiles to form unique combinations. The big numbers also determine how many units this combo comes with, 10 in this case.

After you purchase an army, you put it into play, attempting to take over territories for points. After your foes whittle down your forces to the point where you just can’t mount an effective offensive (or if you’ve stretched yourself out too thin across the map), you can send your current race into “decline,” letting them slowly die out. This usually removes all of its powers and abilities, but it allows you to recruit a new, active team to battle with.

A match wraps up after a fixed number of rounds, which means players are constantly in the game and engaged. Since a complete takeover of the land isn’t the goal (and probably isn’t even possible here), you’ll never see that sad endgame scenario in Risk where a clear leader has gained too much momentum to lose, and everyone else has to suffer their remaining turns knowing a comeback is impossible. Small World is generally exciting for everyone right up to the end.

Bottom line: In our board game group, Small World is in constant rotation despite all the options that we have available to us. Sessions never take that long — 45 minutes to a little over an hour — and everyone is always eager to see what new power/race combinations are up for grabs. Alchemist Ratmen, Commando Sorcerers, Seafaring Orcs, Wealthy Tritons, Underworld Amazons, Flying Halflings … the possibilities and replayability seem endless because you rarely see the same team twice (even more so if you add in any of the separately sold mini-expansions). Thematically, it’s family-friendly enough for older children to enjoy, yet it offers enough strategy to serve as a tournament game at conventions.

Even though this is is an older product, don’t miss out! Small World gets one of the highest recommendations that I can offer.