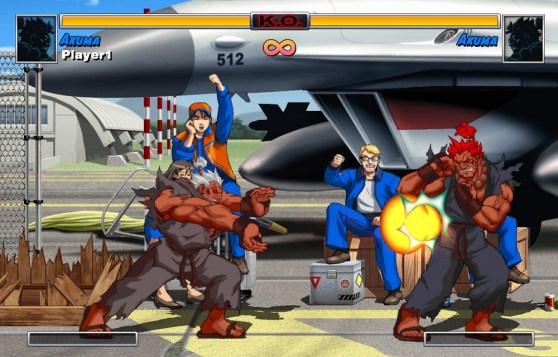 I’d bet designer David Sirlin is a gambling man. He unplugged and quit the multibillion-dollar video game industry to make tabletop entertainment. For the time being, he barely breaks even — the board-game biz isn’t the most lucrative — pouring his profits back into his next release. He writes too many checks to make his products look good, spending close to six digits for gorgeous artwork on the latest version of the game we’re writing about here and another, unreleased one. (“Let’s hope I make it all back somehow!” he told GamesBeat.) He created Pandante, which is essentially poker with amped-up bluffing. And he also made Puzzle Strike, which uses casino-style chips instead of cards (and was the inaugural title in our tabletop-gaming series).

Don’t tell us that he doesn’t enjoy an occasional trip to Las Vegas.

But fighting games are his true love. Sirlin was a former pro player and used to work at publisher Capcom Entertainment as the lead designer on Super Street Fighter II Turbo HD Remix. Although he has left video games and Big Publishing behind, he hasn’t forgotten his roots. “I wanted to capture the interesting situations in fighting games that I knew all about from being a tournament player,” said Sirlin. “I drew a lot from Street Fighter by putting things into Yomi like dragon punches, knockdowns, slow ‘Sonic Boom into throw,’ and so on.”

We previously covered another great tabletop translation of a fighting video game, but Yomi is quite different. Here, head-to-head players select characters and their accompanying decks of 56 cards. One of those represents the main warrior and his unique health and abilities; one is for quick reference of the rules; and the rest correspond to normal playing cards: four suits (clubs, diamonds, hearts, spades) covering 2s through 10s, Jacks, Queens, Kings, and Aces, plus two Jokers.

Above: Usually, the higher the card value, the more devastating the attack. Here are a sample three cards for the character Grave Stormborne.

On each of those playing cards are two available moves, which may include simple strikes, throws, blocks, or dodges; special or super attacks; plus “Rewind Time” countermoves.

Players each select one of those from their hands then reveal them simultaneously. What happens next depends on what the combatants played. 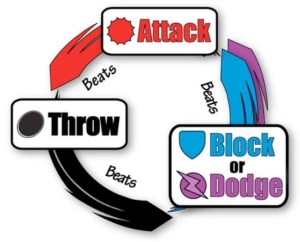 Above: Yomi’s circle of life — and death.

On a most basic level, an attack would beat a throw, a throw would beat a dodge or block, and a dodge or block would beat an attack. Of course, anyone who’s played Street Fighter would recognize that rock-paper-scissors relationship between offense and defense, but despite its heritage, this card game isn’t all Capcom-based. “In Yomi, how attack beats throw is actually more similar to Virtua Fighter than Street Fighter,” said Sirlin, referencing the famous Sega fighting-game series. “So that’s what I had in mind for the core system, even though the window dressing is more Street Fighter-ish.”

Yomi takes the psychological side of one-on-one fighters and puts it into War-like contest (as in the classic card game) with strategic angles to consider. Do you go for a high-powered attack but chance that your foe can dodge and counterattack? Do you anticipate a block, so you go for a throw? Do you let that throw knockdown your opponent, so you weaken him next round? Or do you follow up with a combo? Do you burn several sequential cards to chain a larger combo together but risk your opponent playing a Joker that would “Rewind Time” and cancel and waste your great hand and carefully timed move? (Of course, he may only be bluffing and may not even have a Joker to play ….) And what kind of advantage can you gain if you take your enemy’s “rock” out of that “rock-paper-scissors” decision for one round?

The game is as much about reading and trying to psyche out your opponent as it is about just trying to knock the other guy’s health down to zero. In that aspect, it’s very poker-like. I’ve had a few matches where my wife and I are eyeing each other, trying to figure out what the other has in mind.

Yomi may never be as big as Street Fighter, but right now, it’s the closest analog analogue. “The main thing with a card game is to keep the complexity as low as possible, so it’s simple and fast to play,” said Sirlin, “yet somehow make it deep and strategic at the same time. Overall, [making Yomi] was great fun. I put as much of my love for fighting games into the card game as I could!”

Bottom line: Yomi is an interesting mind-game card game with gorgeous artwork (the money Sirlin dished out for this shows). I would advise you, however, not to go out and buy this in stores right now.

At this moment, fundraising for an updated version of Yomi is on Kickstarter. It has already well surpassed its initial $30K goal, but as of this writing, you still have time to get in on the action to get the products before they’re available at retail. Possible buys for backers include new characters, updates to the old ones (gameplay tweaks and new artwork), an expansion that overpowers the fighters, and more.

More images (click for a larger view — please note that some of these cards come from the updated edition that’s available via Kickstarter):