Funny thing: In the world of tabletop gaming, reviewers (and many gamers) are as tired of zombies as we are on the video game side. But the Zombicide series and its fans haven’t really got in line with that. Just look at the numbers these crowdfunded board games have pulled in:

Not bad for a “tired” genre.

But Zombicide‘s secret for success isn’t so difficult to crack: Simple, accessible gameplay with a massive amount of detailed miniature playing pieces. Like these: 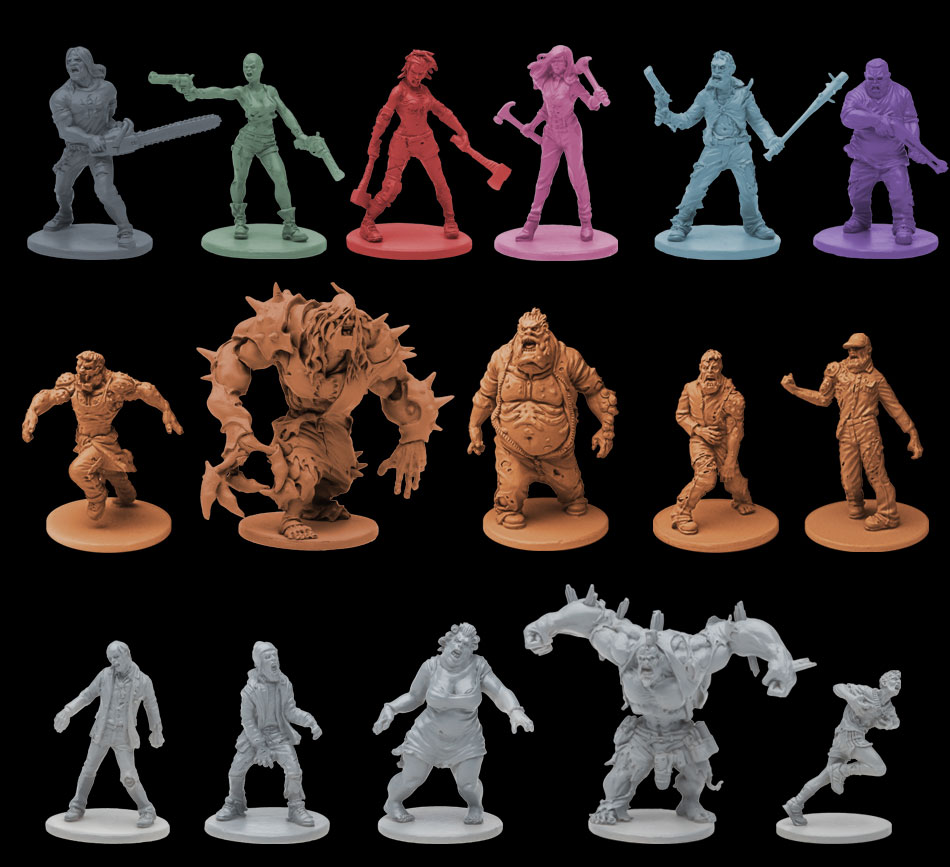 So that’s what you’re paying for with this game’s hefty price tag: a horde of pint-sized zombies (plus sturdy, modular map tiles that create the infested city or buildings that they’ll be wandering around in). And when it’s all on the table (or likely, taking over it as the stages can get quite large depending on the mission you’re playing), it looks pretty impressive.

It all comes together to re-create a co-op experience not unlike Left 4 Dead. Like in that video game, Zombicide has a small team of humans attempting to survive a zombie apocalypse. Both have minor objectives for players to get through and a few better weapons to pick up. But the overall message and tone are pretty much the same: Kill the zombies before they kill you.

In the version that we played (Season 2: Prison Outbreak), the players select a scenario (which can be played in succession for a larger campaign or individually as standalone experiences) then work together to complete goals, all while fending off the continuously spawning undead.

In Prison Outbreak‘s tutorial stage, for example, the team must work together to find a key in one of the buildings that will let them into the local prison. (If you know The Walking Dead, then you know that these concrete fortresses can make for a great home base when all hell’s breaking loose — at least for a little while … .) Searching rooms, however, is dangerous. Each newly revealed area can spawn new zombies, and if you make too much noise opening doors with your character’s equipped gear — a crowbar is preferable to a chainsaw here — then you can attract even more. And if you’re not careful, you can trip the silent alarm on this level. Well, it’s silent to living people, anyways.

At the same time, searching is the only way to find better weapons (if you’re going to go loud, go automatic-shotgun loud), upgrades like rifle scopes, or extra ammunition. In game terms, better firepower means either more dice to roll in your attempts to hit your foes, easier numbers to roll “to hit,” or simply more damage. And eventually, the zombie flow will get to the point where you’re going to want something better than that nightstick that you started the session with.

The play is fairly straight forward: On the humans’ turn, players can move on the map, fight, search, open doors, flip switches, or even hop in a car to plow through crowds, Dead Rising-style. On the zombies’ turn, they just move, attack, and spawn with an intuitive automated system that doesn’t require another player to take on the role of the bad guy. And as the humans kill zombies, they get experience points which leads to new skills and abilities at higher levels. Careful, though — the rate at which the zombies appear (and how often the tough ones come up) directly correlates to the highest levels the characters obtain. That means, in a very cleverly designed, self-balancing mechanism, the game gets more difficult as the players grow in power.

Bottom line: Zombicide is very quick and easy to play once you get used to how line of sight works. At the same time, the game captures the spirit of the more action-y side of the zombie apocalypse: Don’t worry about things like food, shelter, and your loved ones — just be quiet when you can, and when you can’t, blast ’em. The undead waves will eventually pile up faster than you can kill them, but that’s part of the fun. Even though the game’s called Zombicide, you can’t always wipe them all out, and you might just have to rush pass the mass of dead to get to the objective to survive until the next mission. It’s all quite thrilling for a board game.