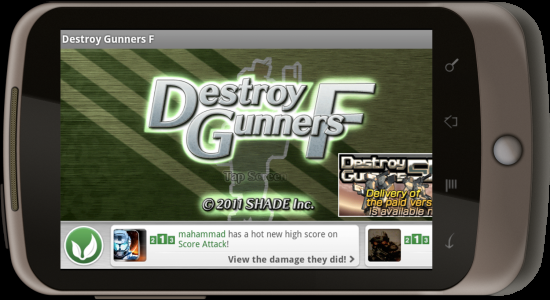 Japanese social networking site and developer Gree has gone back on its claim that it would keep OpenFeint open until the third quarter of 2013.

Instead, Gree informed developers today that it will shut off the OpenFeint servers on December 14. That gives the scores of developers who use the in-game social networking platform less than a month to push an update to users that will remove the feature.

“Our game GoNinja has had over 1.5 million downloads on Android and iOS,” developer George Deglin told GamesBeat. “Even if we push an update in time, thousands of our users won’t know to download it and will get a failed game. It’s very frustrating.”

OpenFeint was one of the few go-to solutions Android and iOS developers could implement to add social features to their games. Users could create friends lists, keep track of leaderboards, and send each other custom-made challenges.

Gree purchased OpenFeint in April 2011 for $104 million and made it no secret that it wanted to migrate those users over to its network. But again, it originally promised to keep those OpenFeint servers running well into 2013 as you can see in the screenshot of OpenFeint’s support page below. Gree has now removed that page. 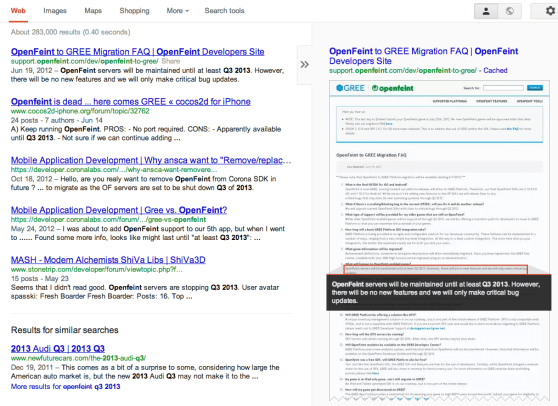 So how will this affect games and users?

“If we do nothing, new users and users who have previously opted into OpenFeint in GoNinja will most likely not be able to launch our game after the OpenFeint shutdown — it will freeze on the loading screen,” said Deglin. “Since our game has been out for a while now and has so many people who have downloaded it, it’s possible that many of them will leave a bad review upon the game failing.”

Deglin and his team plans to remove OpenFeint completely, and they won’t be replacing it with any similar functionality.

“We have another game that we’re working really hard to release before the holiday, so this will unfortunately take time away from our main focus,” he said. Millions of new Apple and Android devices are activated around the gift-giving holidays, and that naturally leads to a spike in application downloads. December seems like an especially busy time to shut down these servers.

“Ideally, [Gree] should have provided much longer notice,” said Deglin. “It can’t take that much effort to keep a server running, and the cost would be worth preventing the loss of developer trust. If they gave us more time, then I think we definitely would consider moving to the Gree platform — especially if it starts looking more promising. I’m sure other developers feel the same way. As it stands now, we don’t want anything to do with Gree anymore.”

Developers who do choose to migrate their game to Gree can reclaim their achievement definitions, screenshots, and game descriptions. Gree also provides a way for developers to transfer the leaderboards up to the top 1,000 players from OpenFeint to its service.

It will be interesting to see how many developers choose to implement Gree and how many avoid them after feeling burned by this short notice.