Grow Mobile has been doing a lot of quiet growing as a one-stop shop for mobile ad marketing. The San Francisco startup is announcing today that it tripled its revenue growth and doubled its customer base since formally launching in June.

That’s pretty fast growth for a startup, and it suggests that mobile ad marketing management has become a complicated challenge for mobile game and app developers. Grow Mobile’s main service is providing a dashboard so that developers can tell exactly how good a job mobile ad networks are doing at promoting the developer’s games and apps.

The company is also announcing it has hired finance veteran John Moffett as its chief financial officer and Brett Orlanski as its vice president of business development.

Moffett is a 20-year industry veteran with experience as CFO at AppDirect, Vizu, and Digg. Orlanski has 15 years of business-development experience at firms such as WildTangent, Virtual Greats, and Doppelganger. He will lead advertiser sales initiatives and customer acquisition for Grow Mobile.

Grow Mobile has grown quickly because of a “massive fragmentation” issue in mobile, said Brendan Lyall, the firm’s cofounder and chief executive, in an interview with GamesBeat. Game developers have to make great free-to-play games, but they also have to advertise them heavily in order to capture enough players, who tend to churn quickly.

“There are 200 ad networks and a massive, long tail,” Lyall said.

He said that the company’s Grow Mobile Platform is now tracking apps across more than 200 million devices and it is processing data for more than nine million daily active users. Grow Mobile now manages millions of dollars a month in monthly advertising spending for many of the top mobile app and game publishers, Lyall said. 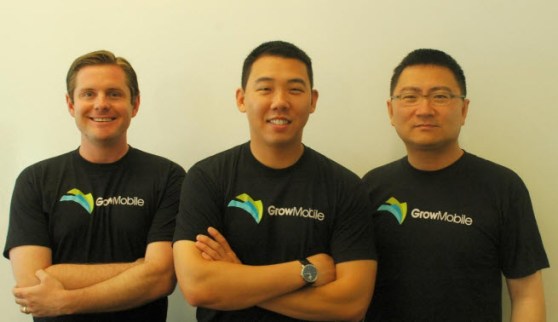 “We used to work with dozens of ad networks ourselves,” Lyall said. “We had budgets in the millions. We wanted to create a system that made it easier for mobile advertisers, in this case developers, to buy ads across the mobile ecosystem. We let the media buyers execute their campaigns using one solution. We are as programmatic as our traffic sources allow us to be. And we are a self-service dashboard.”

Grow Mobile moved quickly, starting in August 2012. It launched an alpha version of its platform in October 2012. It launched a closed-beta test in January 2013 and then formally launched in June. Within a couple of months, it was profitable, Lyall said. During 18 months of operation, Lyall said the company’s platform has had no downtime.

Along the way, the company has added capabilities such as predictive lifetime value, or calculating how much revenue a mobile user will generate over the life of an app or game.

Grow Mobile raised $1 million in seed funding from Signia Venture Partners, the firm headed by former Playdom chairman Rick Thompson, and Bessemer Venture Partners. Rivals include Fiksu and Trade Mob among the “unified buying” platforms. The firm has 11 employees and is expanding into new territories.

“We are moving into a growth phase,” Lyall said.

As far as observations about games go, Lyall said that the bigger advertisers (among developers) are making the majority of the revenues in the mobile game industry.

“We help them optimize positive return-on-investment on the platform and we see a lot of healthy businesses,” Lyall said. “There are plenty of companies out there making a lot of money.”

Popular games in 2013 included hardcore and midcore games. The latter are hardcore in nature but snack-like in time requirements. Casino slot and bingo games are doing well, as are titles developed in overseas markets and brought to the U.S. Indie developers are doing particularly well in the casual game segment, Lyall said.