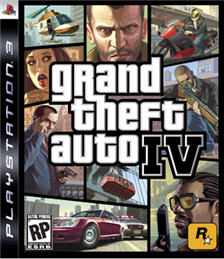 April is the coolest month for video game sales.

Sales of the U.S. video game industry grew at a red hot 47 percent in April to $1.23 billion, up from $839 million a year earlier. Brisk sales of “Grand Theft Auto IV” at the very end of the month helped drive sales upward despite a recession that has hurt consumer spending in other areas, according to market researcher NPD Group.

Microsoft announced yesterday that it was the first console to hit 10 million consoles sold in the U.S., but analysts shook it off as an irrelevant number, since unit sales of the Nintendo Wii have dominated worldwide sales. More significant, however, is that Microsoft says Xbox Live membership has now topped 12 million worldwide. And to date, consumers have spent $9.7 billion on Xbox 360 overall to date.

Anita Frazier, an analyst at NPD, said that normally at this stage in the hardware cycle, more sales should be coming from hardware. But software sales were hot thanks to GTA IV and other big games. The pipeline of content continues to look good, with big games coming on all the consoles.

I saw Konami’s big PS 3 game, “Metal Gear Solid 4: Guns of the Patriots,” last night at a long press event in San Francisco. Creator Hideo Kojima demoed the game live and many parts of the game clearly live up to its promise as a tour de force. The graphics quality is top notch and you can do a lot of things in that game that you could never do before. (Like read a Playboy magazine, listen to an iPod, and sneak past enemies with a transparent camouflage — the latter in a realistic and graphically cool way). That title is coming June 12 as a PS 3 exclusive. Electronic Arts, Ubisoft, Microsoft, and others also showed off hot titles this week. The hot title for Microsoft will be “Gears of War 2,” which also looked intense and spectacular. That title is coming in November. Nintendo, meanwhile, has “Wii Fit” coming on May 19. These games suggest that the pipeline is full for the industry and there is no reason to expect a content-driven slowdown in sales anytime soon.

Grand Theft Auto IV debuted on April 29, but, based on the way NPD does accounting, the monthly sales captured five days of its sales. Frazier said it is one of the fastest-selling video games in history, and its publisher Take-Two Interactive said it sold $500 million worth of games in the first week. GTA IV sold 1.85 million units on the Xbox 360 and 1 million units on the PS 3. Frazier said that GTA IV sales are likely to lift May results as well.

But it wasn’t all about mayhem. “Mario Kart” for the Nintendo Wii captured the No. 2 sales for the month, thanks to sales to the anti-GTA, non-violent crowd. Controversial or not, April 2008 will go down as the high-water mark for video games. At least until next month.