Rockstar Games has been churning out updates for Grand Theft Auto Online since 2013, but now and then, we get a hefty one. And that’s the case with today’s free Los Santos Tuners update.

Rockstar said it is adding a bunch of highly requested features, including a weapons-free social space for players to congregate in and mod or test their cars. They’re also getting a bunch of modifiable vehicles.

This sort of update is one of maybe two major updates per year that Rockstar does to keep fans coming back to the game. It also comes after several significant announcements. In June, Rockstar said that the game’s servers for the PlayStation 3 and Xbox 360 versions will shut down on December 16. Microtransactions will become unavailable for those platforms on September 15, and Social Club tracking will close on September 16.

On the other hand, GTA Online will debut for the PlayStation 5 and Xbox Series X consoles November 11, and it will be free on the PS5 for three months. And earlier this year, Rockstar used a tip from a user named t0st, who found a way to reduce the loading times of GTA Online by up to 70%. Rockstar used the patch in its March update and paid the user a $10,000 award from its bug bounty program.

Michael Pachter, an analyst at Wedbush Securities, estimates that GTA Online generates $500 million in revenue a year for Rockstar Games and its parent company Take-Two Interactive. GTA Online is free for players who have purchased a copy of Grand Theft Auto V, and GTA Online generates additional revenue through players who buy optional digital items via microtransactions. The game is also hitting record numbers of active players each quarter. 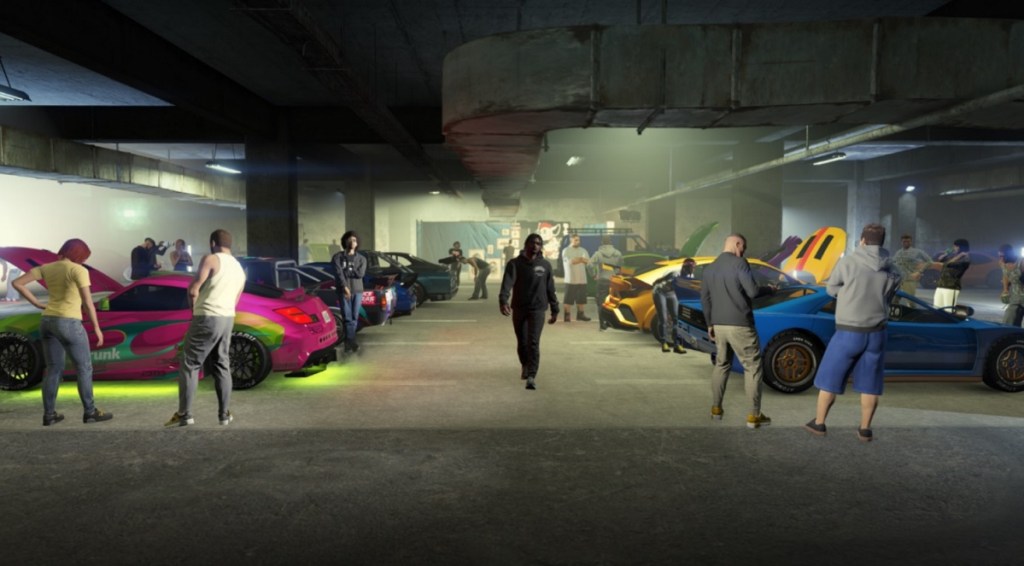 Los Santos Tuners is for the fans who appreciate car culture. It gives players a chance to hang out together at the LS Car Meet, an underground meet-up spot hidden in plain sight in an abandoned warehouse at the edges of Cypress Flats. And yes, it’s a place where peace is breaking out in the otherwise violent world of urban combat. You might say this is very metaverse-like.

This also offers players one of the community’s most highly requested features: a dedicated area to safely show off their customized vehicles and admire other players’ cars, mod their car or watch others mod theirs in real time, test new cars with friends on a private Test Track, and more. Up to 30 players can meet in the space at once.

The LS Car Meet itself is operated by Mimi, the de facto ambassador for LS car customization who will help new Car Meet Members learn about the space, jumpstarting their Car Meet Rep and giving them access to a host of membership rewards, discounts, and additional features — including access to the new underground Test Track to try out new vehicles, Test Ride unreleased vehicles, flex in the Prize Ride Challenge, mod vehicles with friends, or hit the streets for the new Pursuit and Street Races.

In addition to the LS Car Meet, 6 new race types, Auto Shop, and multipart Contracts, players will also have the capability to collect brand-new music to add to the in-car radio dial by locating Media Sticks around Los Santos, including the new “Kenny’s Backyard Boogie Mix,” which features new and exclusive Moodymann tracks featuring collaborations with Channel Tres, Nez and Jessie Johnson from Prince’s former band, The Time, and a special new DJ mix, “CLR Launch Party”, from CircoLoco Records featured artist, Seth Troxler. Plus, players will now have the chance to customize their Radio Wheel, favoriting stations alongside the creation of their own by way of the Media Sticks.

And coming this Fall, the launch of Grand Theft Auto V for PlayStation 5 and Xbox Series X/S will bring new top speed boosts to select vehicles, including new versions of the Grand Theft Auto III classic, the Bravado Banshee, to celebrate the 20th anniversary of GTA III.