Square Enix’s Marvel games exist in a strange place between the movies and the comics. That was true of Marvel’s Avengers, and it’s even more obvious in its Guardians of the Galaxy game from developer Eidos. This game draws obvious linear inspiration from the James Gunn films. But like with Avengers, the characters do not look like their movie-star counterparts. That ends up making this adventure, which I played for more than an hour over the streaming service Parsec, feel a bit like the cheap movie-licensed games that were common on the Super Nintendo and PlayStation. But it’s also kinda nice to get one of those again.

I had fun with Guardians of the Galaxy. It has a lot going on. Its most obvious point of comparison is the campaign from Marvel’s Avengers. And if you enjoyed the writing and action in that, you’ll likely enjoy it here.

But the game lives right in the heart of an uncanny valley when it comes to comparisons to the films. This Peter Quill has a Walkman with headphones that players can use to activate pop-music needle drops to give the squad a boost in combat. Drax, like in the films, is a bit of a meathead. And Rocket’s voice actor is trying to sound a lot like Bradley Cooper’s New York accent.

It’s all so familiar that when things don’t look or feel exactly right, it’s all the more noticeable.

But that doesn’t mean Eidos isn’t using the strengths of the Guardians of the Galaxy for this game. It is. But unlike Marvel’s Spider-Man and Miles Morales games that feel separate from the Spidey comics, movies, and shows, here you’ll need to turn off the part of your brain that remembers the Guardians films.

Guardians of the Galaxy is still solid fun

It took me about the length of the hour-long demo to get a solid hold on what Guardians of the Galaxy is as a game. And look, maybe that was my fault for not watching the tutorial videos before I played so that I understood everything the demo was letting me use. But again, like I said, by the end I got it. And “it,” in this instance, is that while you control Peter Quill, you need to play the Guardians as a team.

That means calling on your teammates in battle by holding down the Guardians Request System button and then asking Groot, Gamora, Drax, or Rocket to swoop in and do a special move. With their assists, combat is a lot easier and more dynamic. And those abilities cool off fast enough that it’s obvious the game expects you to use them frequently during battle. 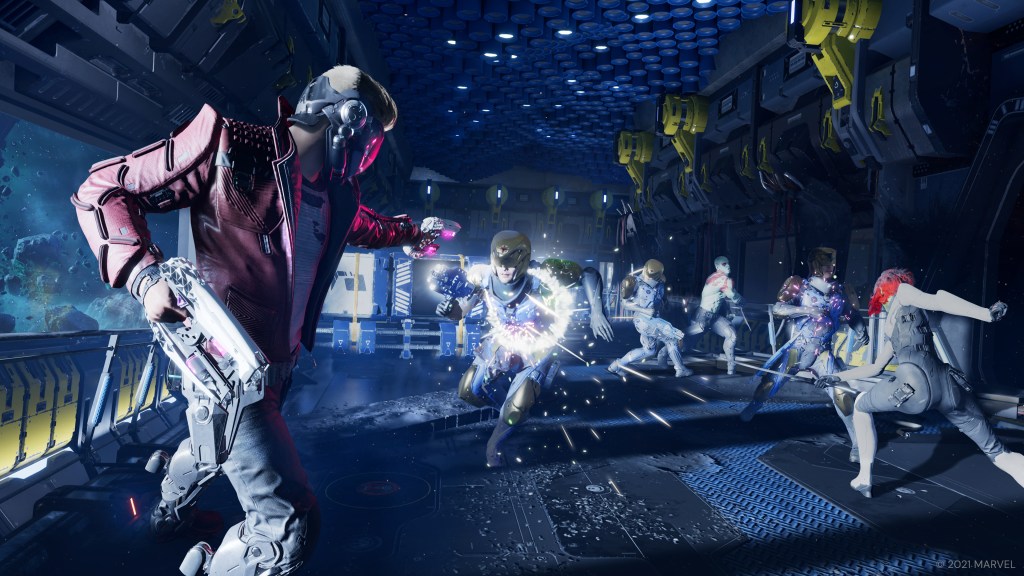 Above: Combat in Guardians of the Galaxy.

Of course, that teamwork does culminate into even more special attacks. One of those powers includes each member of the Guardians of the Galaxy taking their turn pummeling an opponent as a sort of finishing maneuver. The other power is called a huddle up. This is where Star-Lord turns on a song like “White Wedding” and then has the team literally huddle up in the middle of a fight. Quill then gets a chance to pick a dialogue option to get the crew amped up. If you choose correctly, your team gets attack and defense buffs.

The game continues its team-based orientation even outside of combat. You’ll encounter puzzles that require you ask for help from specific members of the team. And it’s not always as simple as “hey you, open that door.” In one instance, I had to plead with Rocket multiple times and get other Guardians to help me convince the raccoon to use his skills.

And really, that is a strong place for Guardians to land. Right in that meaty part of the tension between the characters. And I have confidence that the game will try to do some interesting things with that dynamic.

But it also feels like an old movie-licensed game

It helped going into Guardians of the Galaxy with relatively low expectations. In trailers, I think the game looks odd. It has stilted animations and the characters look like cheap imitations of the real thing. But in context, you don’t notice those problems all that often. What you do notice is that even though it isn’t exactly a game based on a movie, it still feels like one.

Guardians of the Galaxy is doing its best to give you the thrills you’d expect from a game in that universe. And like almost every movie licensed game that I’ve ever played, it’s mostly mimicking its superior source material. And yet, I don’t know that I care. I think the game is fun enough that I’m just happy to be hanging out with these characters and doing the stuff that Guardians do.

Something like this doesn’t need to end up as a game of the year contender. It just needs to make Guardians of the Galaxy fans smile, and I came out of it smiling.

Guardians of the Galaxy launches October 26 for PlayStation 4, Xbox, Switch, and PC.