The massively multiplayer online (MMO) games business is about to get even more competitive. Market leader World of Warcraft (WoW) dodged a bullet when the launch of Star Wars: The Old Republic (SWTOR) put only a minor dent into its customer base, which still sits at an imposing 10.2M. But the next challenger is already on its way in the shape of NCsoft‘s Guild Wars 2, due for release later this year.

The first generation of Guild Wars games sold over 6M units. Guild Wars 2 will not just appeal to that existing fan base. The pleasant surprise of our beta weekend experience was how welcoming the sequel is to new players. Guild Wars 2 has addictive gameplay with a gentle learning curve. The lack of a mandatory subscription fee will tempt newcomers to give it a try.

Business model: neither free nor fee

Guild Wars 2 sits somewhere in between the established business models for MMOs. When the first commercial online game worlds started in the 1990s, monthly service fees in addition to the purchase price became the norm, justified by the ongoing costs of game improvements and server operations. The emergence of the free-to-play model, where users pay nothing upfront but may make optional purchases for virtual items or services, disrupted the industry to an extent that many established MMOs scrapped mandatory monthly fees in lieu of microtransactions. As a result, the quality of free-to-play MMOs has been rising, offering a viable alternative for hardcore gamers.

Guild Wars 2 operates on a mix of these two business models. Customers must purchase the PC game, which carries an MSRP of $59.95 for the standard edition, but pay no recurring subscription charges. The game will offer a variety of virtual items for purchase instead, says Mike O’Brien, President of Guild Wars 2 developer ArenaNet: “We think players should have the opportunity to spend money on items that … offer more ways to express themselves … on account services and on time-saving convenience items … But it’s never OK for players who spend money to have an unfair advantage over players who spend time.”

Getting started: map for success 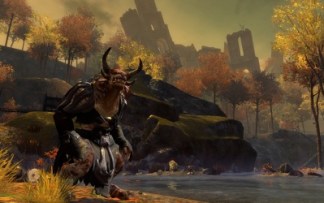 Three of five races and all eight classes were playable during a recent beta weekend. Character creation offers a wide range of visual customization details and multiple-choice options about the hero’s origins. Each race has its own distinctive starting area and the action gets going quickly. My brand-new Charr engineer was immediately thrown into an ongoing battle and helped defeat an imposing boss even before he hit level 2. The early going is certainly busy, but an excellent game-world map and well-dosed tutorial tips ease new players into the game.

Getting around is a breeze with portals generously scattered throughout the landscape. Once unlocked by exploring, they allow instant teleportation. Not sure which direction to head? Talking to scouts adds points of interests to the map, someone in need of help is never far away. It’s fun just to zoom around the game world map and wonder where to venture next. I particularly liked the dotted breadcrumb line my character leaves on the map screen, it’s useful for retracing steps and just looks cute.

It doesn’t take long to stumble upon a “dynamic event”, indicated by an orange circle on the map. Any player can jump in and participate in a joint effort to fight back an enemy invasion or collect certain items spread about an area. Events are pretty frequent and usually just a short walk away; at times I found two different ones competing for my attention at the same time. They are basically surprise quests that may lead to follow-up events and can be a great way to meet new people. 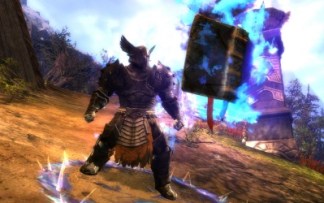 Basic gameplay is standard role-playing fare. You create a character, you explore the world and kill things, get rewarded with experience points and better gear to face more challenging tasks. Depending on the class and weapons choice, characters unlock a growing number of special attacks.

In MMOs like World of Warcraft and Star Wars: The Old Republic, higher level characters have dozens of abilities at their disposal, overwhelming the player with numerous hot key bars. But Guild Wars 2 limits the number of skills a player can access during battle. Building a custom deck of skills becomes an important tactical component, particularly for the Player vs. Player (PvP) endgame. Two characters might belong to the same class, but can have different play styles and abilities.

Other than that, combat feels a lot like typical MMOs. Guild Wars 2 is not an action game; the outcome of a battle is strongly influenced by stats and calculations. But fighting feels exciting because special abilities can be triggered while moving around, and quickly selecting the right skill in any given situation is crucial. Positioning is more important than in the average MMO. A dodging maneuver even allows characters to evade certain attacks. Players also have to pay attention to each ability’s cool-down timer, which determines when it can be used again.

The graphics: you get what you pay for

There are a good number of veteran MMO role-playing games out there that are free to download. The Lord of the Rings comes to mind and now even the relatively new (and pretty) Aion is joining the free-to-play circus. But five minutes into Guild Wars 2 and you get why the developers think they’ll be able to demand 60 bucks. The visuals in Guild Wars 2 are ahead of the MMO competition. Compared to the cartoonish art style of WoW and SWTOR, the artwork here has a more realistic, detailed fantasy look with beautiful landscapes and some impressive character models.

SWTOR has spoiled us with the quality of its cinematic storytelling and interactive dialogs that allow players to directly influence how certain missions are resolved. Guild Wars 2 doesn’t seem to reach those lofty presentation heights with its “personal story” quests, but they bring a little extra drama to the game. As my character progresses, he can participate in an unfolding storyline that is told through voiced conversation scenes. I didn’t grow overly attached to Guild Wars 2’s story characters and wasn’t able to pick my hero’s responses. But at the end of the first chapter, my Charr engineer got to select one of two weapon types to which a new technology would be applied. I haven’t been able to explore the long-term effects of such choices yet. 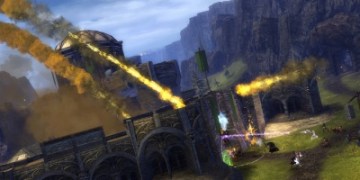 The first Guild Wars built up a huge fan base because of the quality of its competitive Player vs. Player (PvP) component, and its heir doesn’t disappoint in that department. Upon entering the lobby for team PvP, my character was bumped to the maximum level of 80 and outfitted with proper equipment to ensure that all participants are on equal terms. Players are allowed to re-configure their deck of skills before entering a battle. I tried a couple of rounds of conquest games on different maps. Two teams are pitted against each other; capturing and holding control points and defeating enemies racks up points.

The populations of three game servers are competing against each other in the sprawling “World vs. World” maps, fighting an epic ongoing warfare on a grander scale. Every player on a server benefits if his side is doing well here because territorial control grants small percentage bonuses on gold loot and healing, for example. Because of the limited number of players participating in the beta event, we weren’t quite able to get a feeling for the full scale of World vs. World warfare. The size of the maps, the number of strategic points, and the resource gathering for building war machines are all promising ingredients for a long-term PvP conflict.

During my beta adventures I only scratched the surface of Guild Wars 2. The amount of content and gameplay options, combined with the lack of a monthly subscription fee, makes this a very compelling product. It should appeal to most MMO players and even to fans of single-player RPGs like Bethesda’s multi-million selling The Elder Scrolls: Skyrim.

Guild Wars 2 does a much better job than its predecessor of offering interesting content for solo players and creating the feeling of a dynamic, live game world. I got to do cool things quickly with minimal amounts of irritation and confusion. Though I focused on the firearms-wielding and turrets-building engineer, the seven other character classes seem equally interesting.

I also liked that the character progress is more evenly paced than in most other MMOs. Take WoW for example, where new characters gain levels at rapid speed, but later in the game it seems to take forever for that experience bar to fill up. But taking my Guild Wars 2 character from level 30 to 31 didn’t consume significantly more time than going from 5 to 6. If the game maintains this rate, making it to the maximum level 80 shouldn’t feel like the grind that other role-playing games like to put players through.

Game performance during my beta experience was surprisingly solid, with only a few slowdowns in areas where large player groups clumped together for an event. The development team is in the process of stress-testing the server loads, so we will have to see how the release version performs with large player groups in one area.

Guild Wars 2 is supposed to be released sometime in 2012 for Windows PCs only, staring at $59.99 for the standard edition. A digital deluxe version with extra virtual items is priced at $79.99, and a $149.99 collector’s edition comes with additional physical goodies like art prints, a “making of” book, and a 10-inch game character statue.