GungHo Online Entertainment is in an interesting phase of its business. The game studio is no longer part of Softbank, the giant Japanese telecom company. Its breadwinner, Puzzle & Dragons, is still doing well in Asia, and in May it hit the 10 million download landmark in the U.S. It’s testing Super Senso, a mobile strategy game from New York developer Turbo. And it’s working with 17 Bit to release Galak-Z, a fun, niche mech-roguelike for the PlayStation 4, on mobile.

Oh, and it’s working with one of the most distinctive game developers: Goichi Suda, aka Suda 51, whose Grasshopper Manufacture studio is known for stylish, sometimes violent and bloody games. He’s even written songs for some of his creations, too. GungHo will publish Let It Die, Grasshopper’s next game.

This is an edited transcript of our discussion.

GamesBeat: Is Gung Ho buying back all of its shares from Softbank?

Kazuki Morishita: Yes, we are. We’ve started with TOB.

GamesBeat: Do you feel any sadness about departing from Softbank, or are you excited about this?

Morishita: From the get-go—they’ve been stockholders for a while. But in terms of business, how we do things, in terms of production, in terms of how the company is run, they didn’t really have a lot of say. We were always working independently. So there was that business relationship, but how we run our business won’t change with Softbank’s departure. It’s not a big difference for us. Our independence is just becoming official, as far as how the company is set up. Any internal or emotional stuff, there’s really nothing different.

GamesBeat: Is the company, all the people below you, excited about going independent?

Morishita: Probably not? There’s no real big difference there. Officially we’re independent now, but between when we were at Softbank and now, the people in production and development never had anything to do with Softbank as our parent company. It doesn’t change much. When I started the company, they were the investors. But they were just an investor, a financial contributor. In terms of motivations, there’s no going up or down. It’s all staying put. At the management level, we’re now officially independent and that’s the attitude we have now. Maybe people at that level are happier? From my position looking down and seeing how people react, though, I haven’t seen much of a reaction. 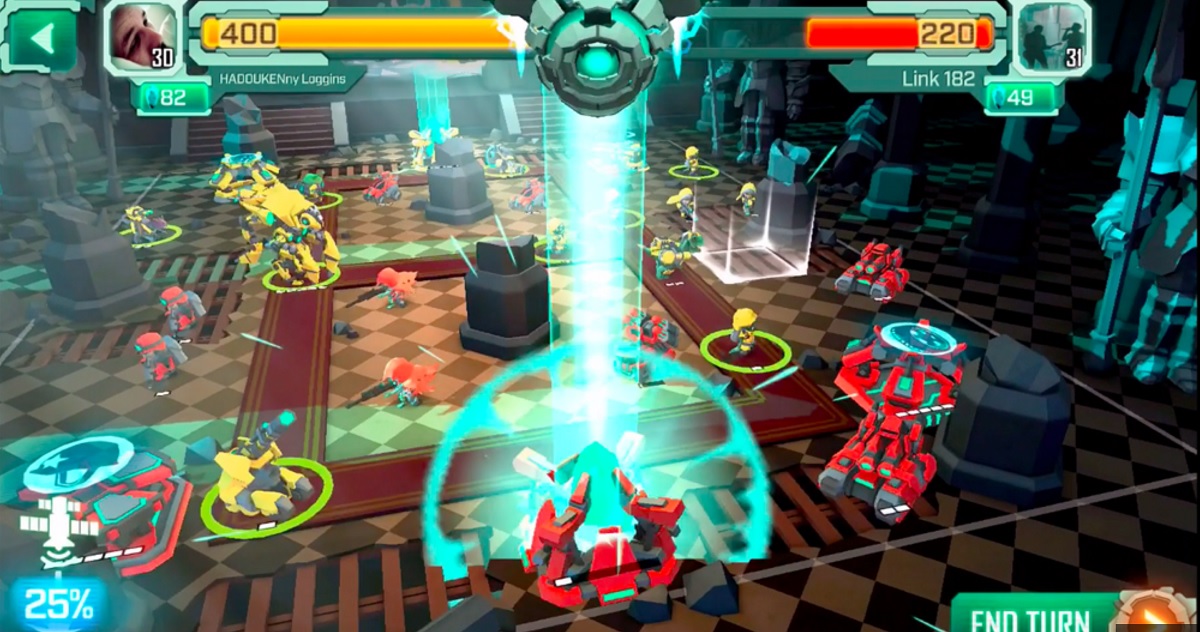 GamesBeat: Your most recent game is Super Senso, right? How is that doing?

Morishita: We released the closed beta in April, but it’s not in official release yet. The next step will be a soft launch and then full launch. The closed beta is doing well and we’re getting a lot of good feedback. But it’s very closed, very small. We’re making a lot of fixes and changes based on feedback.

GamesBeat: How excited are you about launching Super Senso in the United States?

Morishita: We do have a U.S. office, Gung Ho Online Entertainment America. Obviously that’s a 100 percent subsidiary of Gung Ho in Japan. But I’m responsible for the Japanese market, the Japan side. Gung Ho Online Entertainment America also has its own U.S. CEO. We do work together, obviously, especially with Japanese titles coming to the U.S., but as far as Super Senso, that’s a Gung Ho Online Entertainment America initiative. In that sense, we have two separate movements. As a group, as we’re launching Super Senso, we’re focused on PvP. We hope that our next step will be focusing on PvP, making that bigger, and then moving toward an esports initiative. Our biggest focus right now, though, is getting the Gung Ho brand out into the world, whether in the U.S. or in Japan, and going worldwide with our next initiative. As a first step toward that initiative, it’s a great step for us.

GamesBeat: I don’t know what the esports scene in Japan is like. Is it important to you?

Morishita: The word is taking on its own life, especially in Japan. The word “esports” is spreading. It’s well known. But it doesn’t stand for just one idea. It’s multiple ideas. There’s a lot of things that can be considered esports. In that sense, we’ve always been focused on a lot of competitive content, whether it’s PvP or or PvE. With Puzzle and Dragons we’ve always had tournaments. We’ve had the Japan Cup, where we have multiple tournaments all over Japan. We’d focus on 10 areas and have separate competitions there, building to a finals in Tokyo. We’d usually have 150,000 people registering and playing. That’s always been, as far as esports, something we’ve always done. Whether that’s exactly like the concept of esports as it’s known in the western market, that’s hard to figure out. But as far as what Japan thinks of as esports, we’ve always been involved in that area.

GamesBeat: How did Grasshopper and Gung Ho come together?

Morishita: It’s a unique, strange combination of two companies, maybe. From our side, though, it doesn’t seem that weird. When you lineup our titles from the past, maybe they don’t seem to mesh well. I’ve done game design on a regular basis, and when we design games at Gung Ho, we tend to focus on younger players and up, whereas Grasshopper is the exact opposite, they’re going for adults. So there’s a difference as far as target audience. But Gung Ho has considerable strength in game design, and Grasshopper has always been strong with interesting world settings and unique concepts for their games. In that sense we fit together well. We have expertise on one side and Grasshopper has expertise in another. Putting those together has been pretty seamless.

GamesBeat: What is it about Gung Ho that attracted Grasshopper?

Hideyuki Shin: I’m not mainly on the business side. I’m mostly on the development side. But in my opinion, up until now, before our partnership, Grasshopper has always focused on being independent. We’d make a game, find a publisher, the publisher would release it. We’ve always gone through that multiple-step process for every release. Now that we’re part of Gung Ho, the publishing side and the development side are working together from the beginning. We start from scratch on every production and work together. We can collaborate with our different skills. From the development side, it’s gotten a lot easier as far as communication and figuring things out together. Marketing considerations can trickle into game development. Things have gotten a lot easier.

GamesBeat: Does this give the development team more reassurance, knowing that you’ve nailed down a publishing partner earlier in the production process?

Shin: That’s definitely a lot easier, yeah. It used to be that we would focus on making a game, but then after we found a publisher they’d have all kinds of requests about the project. Change this, change that. There were never any kickoff meetings where we figured out development together from the beginning, because we’d already developed the game halfway before we found a publisher. So there was always a disconnect there, and when it came to marketing and things like that as well. Now I can directly talk to Mr. Morishita and have regular conversations about what kind of games we want to make for what kind of target audience. It makes life a lot easier. It makes more sense. I know what to figure out right off, instead of getting a bunch of requests later on and thinking, “I don’t know why they want this, but I guess we have to do it.” That’s probably the biggest thing that’s been easier on the development side.

GamesBeat: How exciting is it that you’ve found a company that’s supportive of Suda’s ideas? They tend to be pretty radical in a lot of ways. Is it reassuring to have support for those ideas right off?

Shin: It’s definitely a very supportive relationship. Any Suda idea, as you said, is very unique. Bold. There’s always—a lot of people do comment, saying things like, “I don’t understand it, but it’s awesome.” That’s always the final conclusion. There’s never a hard “no.” It’s always, “Let’s try to figure out how to present this and make sure the essence is still there.” We want to keep the basic idea, but also figure out how to message that idea to the public. There’s always that supportive relationship. There’s definitely confidence between the two companies. Above: Sentinels suck, whether you’re with the X-Men or the space navy.

GamesBeat: After the launch of Galak-Z, did that show you that Grasshopper is the company you wanted to be with?

Shin: The console version is 17-Bit’s title. They published it together with Sony. The mobile version we haven’t released yet, though. But there’s definitely added confidence there. Galak-Z is a very unique title. It’s very different from any game Gung Ho or Grasshopper has ever released. Galak-Z and Grasshopper’s games move in very different directions, but they’re both bold, like you say. Between 17-Bit and Gung Ho and Grasshopper there’s that three-way relationship, and it does build confidence that Gung Ho is always open to new ideas and new games, whether or not it fits into the profile of their past projects. Gung Ho’s attitude has always been, “If it’s fun, we want to release it.”

GamesBeat: How important is Latin America and the middle east to worldwide expansion plans for Gung Ho?

Morishita: Looking back on the history of gaming, the U.S. and Europe have always been the focus. We’re following in those footsteps. The western market is a big market and that’s something we want to focus on, in terms of initial focus. Obviously, as South America is connected to the U.S. market, that’s a market we want to focus on moving forward. But even more so, we want to focus also on southeast Asia. We feel that’s a market with huge potential in the future. Especially in terms of mobile and smartphone games. Network speed has been advancing every year in those markets. There’s huge potential.

GamesBeat: Southeast Asia, is that outside of India?

GamesBeat: What’s your favorite monster in Puzzle & Dragons, and why?

Morishita: My favorite is Ra. This is very much from a developer’s point of view, because we focused on Ra’s skill—when I was making P&D with the development team, I wanted to make sure that it wasn’t a pure puzzle game so much as a puzzle action game. Ra’s skill, the multiple-color combo skill, that’s something we made sure has the core essence of what a puzzle action game is. That’s why Ra, Ra Dragon, both of those, are my favorite. When I was coming up with the concept and the eventual game balance, I wanted to make sure it was an action-oriented game, a casual action game. And then the puzzle elements would fit in with that. Ra’s skills dictate how the game is supposed to play. The puzzle action concept is embodied by Ra’s skills.