Space is the perfect setting for virtual reality games. Even floating above the Earth, with the vast darkness of space enveloping you, can be extraordinary. But developer CCP Games aimed a little higher than that for its first VR release.

Gunjack is a first-person arcade shooter for the Samsung Gear VR headset (used in conjunction with either a Galaxy Note 5, Galaxy S6, Galaxy S6 Edge, or the Galaxy S6 Edge Plus smartphone). You play as a turret gunner on a mining ship illegally operating in the outer reaches of space. It’s your job to help defend it from pirates, scavengers, and rival corporations who are after your precious cargo.

Gunjack takes place in the same sci-fi universe as Eve Online, CCP’s popular massively multiplayer online role-playing game. But unlike the studio’s other VR game, Eve: Valkyrie for the Oculus Rift, you can’t actually fly a ship in Gunjack.

Instead, you’re stuck in one place. But your head (which also controls your reticule) is free to move around in 360 degrees. Being aware of the space around you is absolutely essential to survival because enemies can come from anywhere. Gunjack is a gorgeous and harrowing experience that made me feel like I was part of a ruthless conflict. 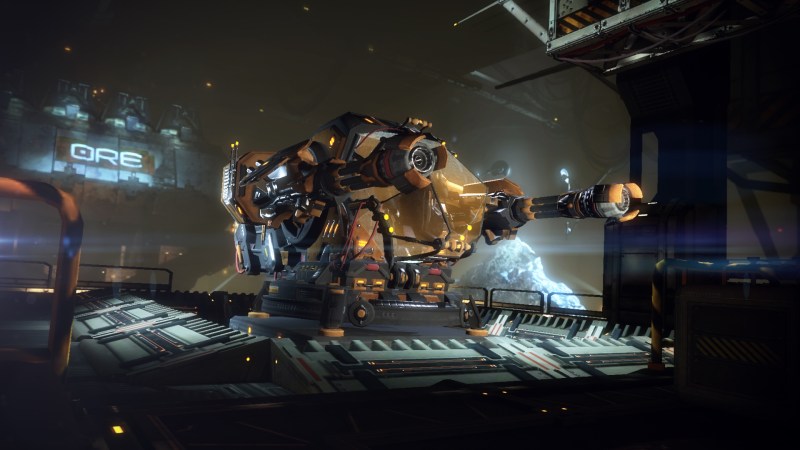 Above: Your home for the next 20 levels.

If Gunjack is your first VR game, you might feel a little overwhelmed. Enemy ships roar past your face as they fly in from behind the turret. When your health is low, an alarm starts beeping, and the glass in your cockpit cracks, hindering your visibility. Orange circles indicate when the enemy is shooting homing missiles at you, a visual cue that always triggered a mild sense of panic as I tried to figure out which targets to prioritize. And the rat-a-tat of your turrets makes it seem like you really are firing powerful ship-tearing bullets.

The cockpit is also intricately detailed. It has weathered machinery, torn posters, and a dozen unreadable Post-its stuck on either side. I loved turning my head around to look at everything while I waited for a mission to start. CCP did a great job making this world feel dirty and lived-in. It really drives home the point that you’re not a war hero. You’re just trying to protect the mining company’s bottom line.

It’s a souped-up version of Galaga

The pirates must’ve played a ton of Galaga because they excel at flying in tight formations. I saw them in immaculate spirals, figure eights, and other crisscrossing patterns. Their formations increased in complexity over time, making them harder and harder to hit. Some ships even turn invisible or won’t take damage until you destroy a specific ship that’s following them. Gunjack throws so many tricks at you that the only real solution is to keep your head moving and dispatch anybody that looks like they’re about to hit you.

It’s easy to lose focus during these feverish battles (especially in the later levels), but that’s part of the challenge. When I was doing well — when I took down a big ship before it could launch a barrage of missiles, or destroyed large groups with the help of a stasis field — I felt like a calculated killing machine. I knew which targets I could ignore for a few seconds and which ones I had to kill immediately. Playing Gunjack while sitting on a swivel chair helped sell the illusion that I was inside of a moving turret.

It works well with or without a controller

I played most of Gunjack with a wireless Bluetooth controller. Having dedicated buttons for firing and reloading is nice, but it’s not necessary. The touch controls on the headset itself is fine, too. To shoot, just tap or hold your finger down on the touchpad. Simple gestures handle the rest: Slide back to reload and slide forward to use power-ups. The only downside is that your arm will get tired after holding it up for a while. 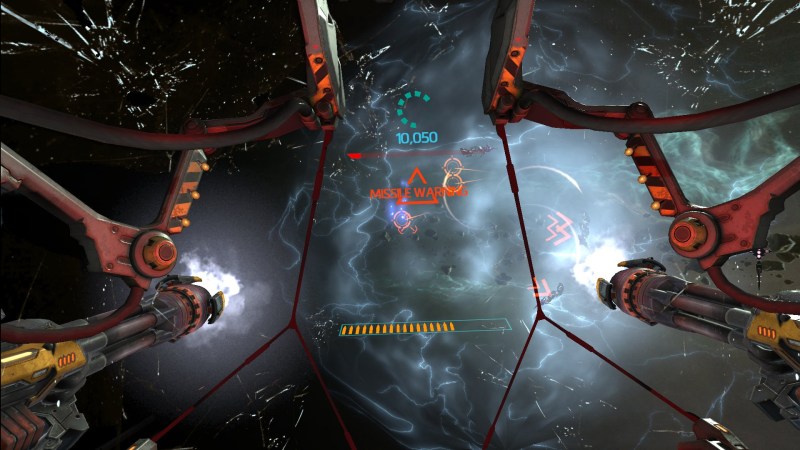 Above: The stasis field power-up slows down any enemies that fly into it.

Seeing the same locations over and over

While the enemy patterns change from one level to the next, the backdrops don’t change nearly often enough. They all feature some sort of asteroid field, and I had a hard time telling them apart. You never get a sense of where you are outside of a character mentioning how you’re in “the fringes of space.”

It doesn’t have much of a story

Eve Online is notoriously complex (I played with friends for six months before I gave up), so it’s exciting that CCP finally has more accessible ways for players to enter that universe. Gunjack is by far the most successful of these endeavors — more so than the PlayStation 3 shooter Dust 514. You select one of the levels from the menu, hop into the cockpit, and start blasting incoming asteroids and enemy ships. But it doesn’t give you a very good reason for why you’re doing all this.

You’ll hear funny one-liners from your boss as he describes each mission, but that’s as far as the storytelling goes. Your only purpose is to protect the ship at all costs. The game gets more interesting later on as you see bigger enemy ships and hear about fellow gunners dying in battle, but Gunjack doesn’t dwell on any of it for too long. 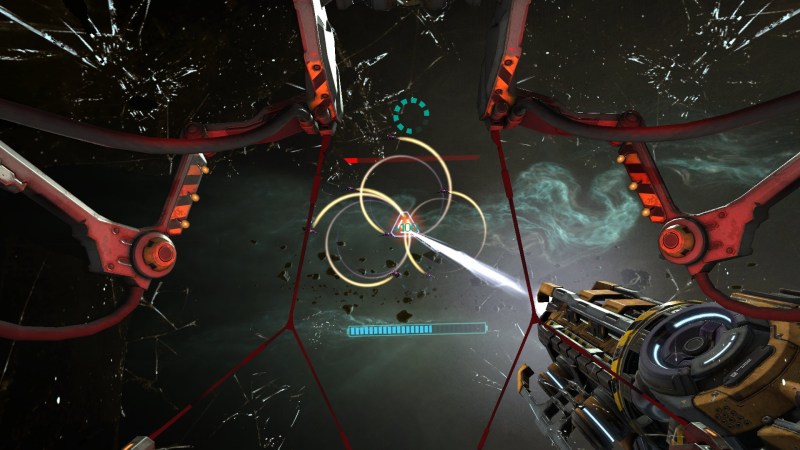 Above: Pirates apparently spend a lot of time synchronizing their movements.

Gunjack is a little short for the price ($10) and doesn’t offer many reasons to return unless you want to get a perfect score in each level. But it’s still a step above the other shooters in the Oculus store, and it’s a great showpiece for the Gear VR. If you already have a headset, Gunjack is the kind of game you need to show your friends and family when you tell them how cool VR can be.

Gunjack is out now for Samsung Gear VR (compatible with Galaxy Note 5, Galaxy S6, Galaxy S6 Edge, and Galaxy S6 Edge Plus smartphones). The publisher provided GamesBeat with a copy of the game for the purpose of this review.

We reviewed Gunjack using a Galaxy S6 Edge that Samsung provided, the Innovator Edition of the Gear VR headset, and a wireless controller. Oculus gave away the headset and the controller at its annual developer conference.