Curious how a first-person shooter with crafting elements and “total environmental destruction” would play? For a modest $15 you can pre-purchase indie game Guncraft and help the developers meet their Kickstarter funding goal of $16,000 to finish the project. It combines typical multiplayer shooter gunplay with the creative crafting and environmental transformations made popular by Minecraft.

In Guncraft, teams of players shoot it out in maps that are built with cubes. This voxel-based technology opens the door to truly destructible levels, as developer Exato Games‘ Kickstarter page claims: “Other games have touted having fully destructible environments, but you could never create craters in the ground, blow giant holes in the side of buildings, or kill someone by destroying the ground underneath. We have that. ” 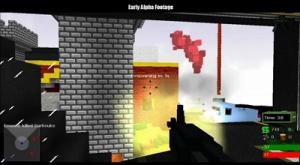 The Guncraft battlefields are also construction zones. Players can place custom-made structures and vehicles in the middle of battle, as long as they have sufficient resources. For example, the flag carrier in a Capture-the-Flag round could build himself a bunker structure to be protected against enemy sniper shots. After every round a game level resets to its original unblemished state.

With Guncraft taking the concept of customizable 3D cube worlds to the shooter category, the “Minecraft-ification” of video game genres is in full swing. Swedish company Mojang has sold over 5 million copies of its sandbox game Minecraft. Because every single part of the landscape can be altered, it has seen its fair share of astonishing user creations like a fan replica of the massively multiplayer online game World of Warcraft. Guncraft is not a game built with the Minecraft technology, but rather a stand-alone program that draws inspiration from the blocky look and configurable game world.

The crowd-funding website Kickstarter has established itself as a viable way to raise funds for small – and even not so small – game projects, as demonstrated by Double Fine Productions collecting $2.2 million so far for a new adventure game.

Exato Games is looking for $16,000 in funding to finish development, which is already two-thirds complete. A $15 pledge gives backers a digital copy of the game and access to the beta test phase. The $25 bracket nets supporters an additional custom Guncraft solider “to show off how awesome you are”. Bigger spenders are rewarded with posters, t-shirts and can even spice up their career resume: The $10,000 rewards include “an associate producer game credit” plus dinner with the development team in Seattle.

The Guncraft team is promoting its Kickstarter pitch with a hilarious Call of Duty: Modern Warfare 3 TV commercial spoof.