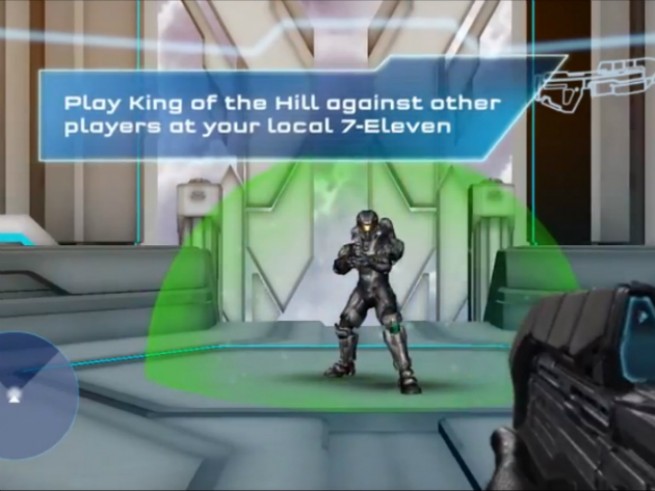 Mobile developer Ogmento has two new games out today. One of them is an interesting location-based basketball game called NBA: King of the Court 2. The other is … Halo 4: King of the Hill Fueled by Mountain Dew.

Yes, “Fueled by Mountain Dew” is part of the actual title. Gamers and the press didn’t miss their opportunity to lob a few insults at the ridiculous name. Still, it’s worth looking at: The game itself isn’t bad, and it’s a clever use of mobile game mechanics that makes use of location data, smartphone cameras, and the ubiquity of 7-Eleven stores, Mountain Dew, and Doritos to create a novel branding exercise.

Both games are due out tomorrow for iOS and soon after on Android, and while many people are quick to judge without playing, they should probably stick around for the description because Ogmento is on to something pretty interesting here.

“At Ogmento, we are really excited about location-based games,” he said. “The world is the final gaming platform. The idea, particularly with our augmented reality, is that we can trigger game experiences around the people, places, and things around you.”

Let’s explain how the game works:

Halo 4: King of the Hill is a free download from Apple’s App Store or Android’s Google Play market. Ogmento designed the entire game around enticing players to engage with its partners’ products: Mountain Dew, Doritos, 7-Eleven, and Halo. The developer accomplishes all of that through its real-world, location-based gameplay.

In Ogmento’s Halo, players need to physically enter an actual 7-Eleven store (which acts as the titular hill) and check in to become the king. If another player checks in to the same 7-Eleven, they can kill the current king and replace them.

Killing is accomplished when players use the Halo 4: King of the Hill app to shoot the current king’s avatar in a first-person shooter minigame that approximates the full Halo console experience. Of course, the other player isn’t going to just be hanging out at 7-Eleven, so the app creates an asynchronous representation for the current player to fight with.

Here’s the really ingenious part: Ogmento throws a kink in the works by limiting a player’s ammo. Guess what the player must to do to reload? He needs to use the King of the Hill app to scan the front of a Mountain Dew or Doritos package, which loads him with enough energy to keep on firing and overtake the old king.

Players get points for each 7-Eleven that they rule. If they earn enough points, they receive an unlock code for special downloadable content in the full Halo 4 game.

It’s a savvy marketing scheme that dangles something that Halo fans may want, and all they have to do is go out to 7-Eleven (a paying partner of Ogmento) and hold a bag of Doritos (also a paying partner).

But is it also brash commercialism? You bet your ass. Gaming website Kotaku called this iOS game a parody of itself. IGN joked in its headline: “Halo 4: King of the Hill Fueled by Mountain Dew is a real app that exists.”

The game company is not showing any sense of shame, however: Quite the contrary.

“We’re in America,” Ogmento president Brian Selzer told GamesBeat. “We’re in the bastion of commercialism, and that’s what spawns a lot of entertainment.”

He was especially responding to a vocal minority of gamers who spent the last week in an outcry over gaming personality Geoff Keighley sitting next to several bottles of Mountain Dew, bags of Doritos, and a cutout of Master Chief.

Yesterday, Polygon ran a story about a Halo promotion at U.K. Pizza Huts. (Full disclosure: Polygon is part of The Verge family of media sites and is a competitor of VentureBeat and GamesBeat.) Angry gamers bombarded the story’s comments section with accusations that Polygon breached its ethics statement.

Then today, gamers got wind of Halo 4: King of the Hill Fueled by Mountain Dew and quickly derided it as another example of how all of gaming is a slave to the corporate master.

“[Our technology] is very innovative, and there’s a big research-and-development cost to that,” said Selzer. “There’s opportunity for us as a company to work with partners like Pepsi, who are really allowing for these types of experiences to be built out and expanded.”

Basically, this game only exists because it’s a commercial for something else.

“It’s kinda like how film director David Fincher does some commercials [in between films],” said Selzer. “He experiments with his film techniques in car commercials, and then he’ll go out and make a feature film [using those techniques], and the audience gets rewarded for that experimentation.”

“This type of game opens doors to new types of games,” said Selzer.

And it did. Ogmento’s NBA: King of the Court 2 is a basketball version of this type of location-based gameplay. It turns real businesses, parks, or wherever into virtual courts that players can become the king of. Players need to outplay the current king of the court to overthrow them, and it all happens asynchronously.

As for getting worked up about a game with a corporate sponsor, it’s kind of too late to do anything about that. The toothpaste is already out of the tube when it comes to commercialism intermingling with our big media launches. I mean, just try to get a non-film-branded large cup at any fast food restaurant during the summer.