LOS ANGELES — Microsoft just gave me a little glimpse into the future thanks to a special visor and some fancy holograms. I’m not sure if it was the future of gaming, but it was definitely the future of … something.

Before allowing a group of me and other journalists to play the upcoming Halo 5: Guardians for Xbox One at the ongoing Electronic Entertainment Expo in Los Angeles, we were all fitted with Microsoft’s HoloLens technology and went through a mission briefing. HoloLens is a visor that fits around your head and puts a screen in front of your eyes that can display holographic projections in a real environment. So, while virtual reality projects a completely different world for you, HoloLens alters the real environment in front of you. It’s augmented reality, not virtual reality like Sony’s Project Morpheous or the Oculus Rift — and could put Microsoft into a market without competitors.

Halo is one of Microsoft’s biggest franchises. The original game launched alongside the first Xbox in 2001 and was an immediate hit. The first-person shooter series has since developed a large following thanks to its online multiplayer and cinematic campaigns. The series’ hero, Master Chief, is synonymous with the brand. It makes sense for Microsoft to use the next installment in the franchise to show off such a big and important tech initiative like HoloLens.

Microsoft had the area we were in decked out like a futuristic military base, but the HoloLens was able to project images on top of it. For starters, I was looking down a hallways, and suddenly, a marker appeared further down it, telling me where to go. I then looked out a panel that was nothing more than a solid wall painted to look like a closed window in real life, but with HoloLens, I was able to open it and show me a busy hanger below. After that, we gathered around a table, which showed us a 3D map of the level we were about to play. I was able to move my head, lean in close, and even instinctively ducked when a holographic ship flew by my face. At one point, I saw a spaceship, and I was actually able to move a red dot around the surface of it just my tilting my head. Objects on the ship would become highlighted and display info when the dot was on them. 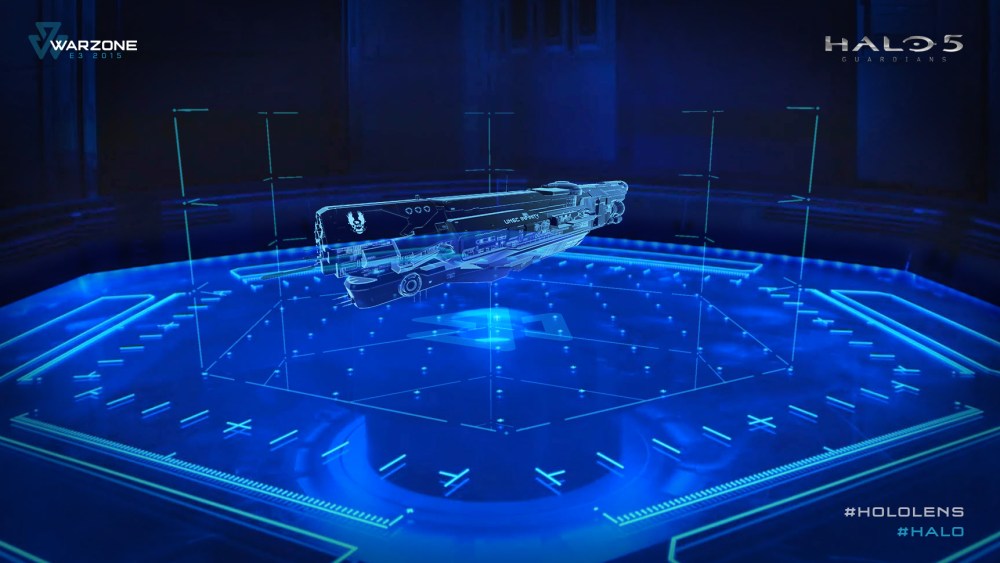 Above: This is the ship I was able to move a red dot around just with my head.

It was amazing. It’s also, sadly, something you’ll probably never see. For our actual Halo 5 demo, we took the HoloLens off and simply played the game. It was fun, but it kind of felt like eating a plain vanilla cookie for desert after a meal of porterhouse steak. Basically, what we saw of HoloLens didn’t really have anything to do with actually playing the game. It was like a theme park experience. It was all spectacle. An incredible spectacle that I’d gladly pay good money for, but Microsoft couldn’t possibly reproduce this experience for actual Halo 5 players.

For one thing, those holographic projections only worked so well because it had actual themed architecture around it. Seeing a holographic Spartan brief me in the middle of a room that looked like something out of Star Wars was great. It might lose some of its luster if it was happening on your living room floor. And what about that virtual hangar I saw? As cool as it was, it was a very scripted moment. HoloLens already knew that fake window was there, so it knew where to map out that view. Could it replicate that experience with my bedroom window? I’m not sure.

Still, maybe Microsoft already is working on some cool ways to get something like what I saw to work in people’s homes, but there’s no way it’ll be as cool as what I saw. That was the result of a lot of planning and detailing. It was like watching a masterful group of actor’s do a Shakespeare play. They know all the lines. But I don’t know if HoloLens will perform as well when it needs to improv with your living room.

But right now, I’m still just giddy over how cool what I just saw was. I hope you all get to experience something similar.