Microsoft showed a preview of the second episode of its “Halo: Nightfall” digital video series yesterday at its HaloFest fan event.

Halo has sold more than 60 million copies since the series debut with Combat Evolved 2001 and generated more than $3 billion in sales at retail for Microsoft. It has also sold countless Xbox game consoles as the flagship game franchise that sets Microsoft’s game machines apart from its competitors. Microsoft hopes to leverage that brand recognition into a much bigger mainstream audience for its digital video series and its separate upcoming Halo television show, which counts Hollywood heavyweight Steven Spielberg as its producer.

The new 20-minute live-action episode debuts Nov. 17. Halo studio 343 Industries and Scott Free Productions. Set in the Halo universe, it has an all-new story starring Agent Jameson Locke (Michael Colter) of the Office of Naval Intelligence (ONI), who returns to a remnant of the original Halo ring with a team of UNSC soldiers to investigate the source of a Covenant biological attack on the colony world of Sedra.

The episode features lots of authentic outfits, weapons, and spacecraft from the game series, as well as new alien threats. Among them: assault rifles, sniper rifles, a Havok tactical nuke, and a full-sized Pelican transport. In the first episode, Locke’s character has to track a rogue Covenant agent who unleashes a mysterious biological attack. He has a macho who’s-in-charge run-in with UNSC leader Randall Aiken, played by Steve Waddington, and that rivalry continues into the second episode, which has some pretty cool special effects that simulate an ugly swarm.

Executive-produced by Ridley Scott, Scott Free TV president David Zucker, and directed by Sergio Mimica-Gezzan (Battlestar Galactica), Halo: Nightfall is available via the Halo: The Master Chief Collection and the Halo Channel on Xbox Live. Microsoft showed the episode at a celebrity event in Los Angeles. 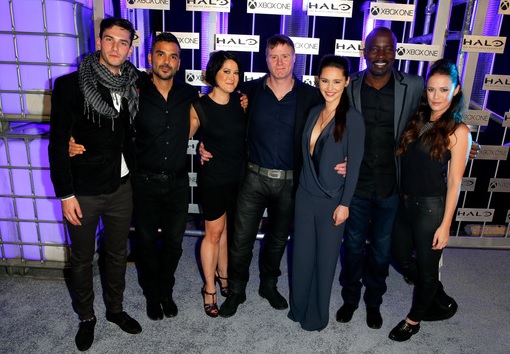