Before you can play as Jameson Locke, you can press “play” to see him.

Microsoft and 343 Industries announced Locke as a “pivotal character” in the upcoming first-person shooter Halo 5: Guardians, due in 2015. Tuesday marks your first time to see him in action, starring in a short digital series. “Halo: Nightfall” carries a Hollywood pedigree, and will be available for streaming inside Halo: The Master Chief Collection (which releases Tuesday) and on the Halo Channel on Xbox Live.

The show is one of two Halo-related series in production as part of a transmedia effort to promote the franchise. The other is a television series simply called Halo. Both are surviving projects from the shuttered Xbox Entertainment Studios. I’ve viewed the first episode.

The series is only five episodes of roughly 20 minutes each, so executive producer Ridley Scott (Prometheus) and crew had to cover an enormous amount of ground in the pilot for those that might not tune in with Master Chief’s entire history memorized.

As a result, much of the first episode paints the scene in broad strokes. Humans have an uneasy truce with their historic alien enemy, the Covenant, which focuses its energy on infiltrating backwater colonies. Sedra, one such Earth-like colony, hosts agents from the Office of Naval Intelligence (ONI), a division of the United Nations Space Command, who keep an eye on Covenant operatives. 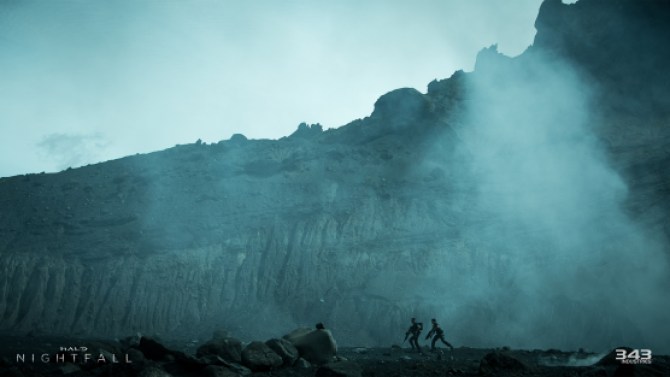 Above: This gritty scenery is totally an alien landscape and not a European location.

Locke’s job in the pilot episode is to react with cool detachment as the story unfolds around him. It creates a sense that Colter can offer much more for this character, but the pilot doesn’t allow much time for that, instead giving us snippets of backstory. The crew hates tracking small-potatoes operatives! Locke speaks Covenant! His meaningful stares can only convey so many hints of emotional conflict.

His comrades and allies are in much the same boat. Christina Chong of 24: Live Another Day plays Talitha Macer, the Plucky, Smart, but Low-Ranking Girl Who Has Something Important to Say. Steve Waddington of The Last of the Mohicans manages to wrest the few bits of genuine emotion from this fairly mechanical plot as Randall Aiken, the Distrustful Soldier with a Mysterious Past. 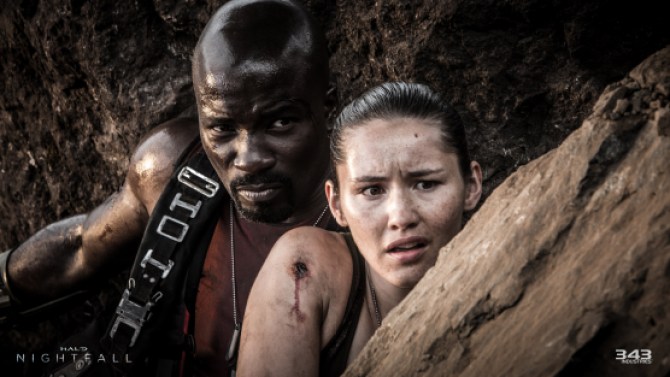 Above: Colter and Chong. Sadly, they do not get to display this much emotion in the pilot.

The rest of Locke’s squad are mostly Guys Who Look Great When Gratuitously Half-Naked. Don’t get me wrong; the lead actors all seem to have much more talent than this action-packed episode can present. One hopes they’ll all get the chance to develop these characters a bit as the miniseries progresses.

Whether or not they do, it’s worth tuning in just to see the look of the show. Scott’s big-budget sci-fi expertise shines through in sets and special effects. A Covenant drop ship looks heavy and satisfying in the air, and a large alien (whose identity I won’t spoil) moves as if it’s made from foreign flesh and bone, not CG-created pixels. Weapons and armor will make Halo fans cheer as the show reproduces details faithfully. 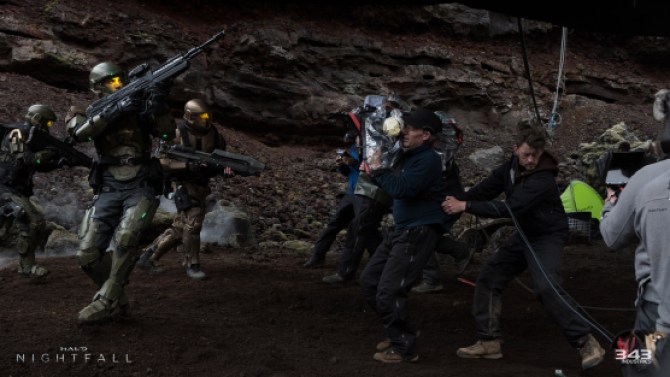 Above: “Guys, this scene is looking great, but I think it needs more weapons.”

A wide variety of weapons make a cameo: You’ll see the energy sword, along with a variety of rifles (including one resembling the trusty MA5B assault rifle and its iconic rear-numeric display). And yes, traditionalists, you’ll get your pistols.

Locke’s unusual blue-lit armor from the Halo: The Master Chief Collection trailer (which ironically captured more pathos than this pilot) doesn’t make an appearance, but many familiar pieces — and large alien artifacts — do.

The pilot’s one visual weakness turns out to be the appearance of near-human aliens, who mostly end up seeming like Homo sapiens subspecies “Great Makeupus.” The CG-generated alien figures look terrific, as do the human characters, so only those unfortunate souls caught in the middle end up awkward.

Microsoft and 343 characterize this as another step in the interaction between dramatic series and games in the Halo universe, and if Colter gets a chance to show some chops, it may make Locke a more compelling figure to play as. Until then … tune in for the special effects and the chance to reminisce about a series we’ve played for 13 years.