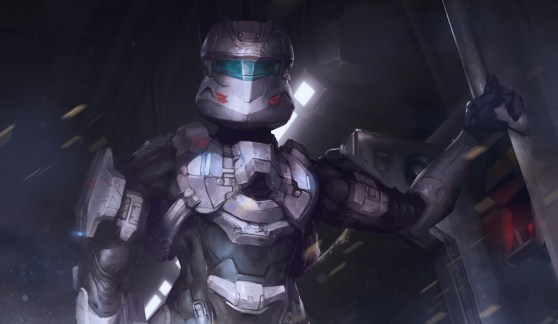 Halo on your Windows tablet. Let that idea sink in for a moment. Now allow me to manage your expectations.

Vanguard Entertainment, under the auspices of Halo developer 343 Industries, has crafted the first official, non-console entry in Microsoft’s premier shooter franchise. Halo: Spartan Assault is a top-down, twin-stick shooter that puts Mjolnir-armored boots on the ground and brings nearly the entire franchise sandbox to bear — vehicles, weapons, enemies, armor abilities, skulls, you name it — on a mobile platform. 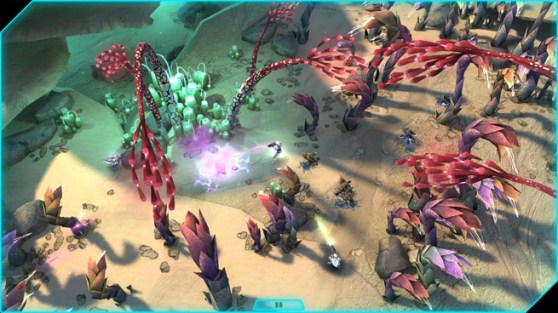 I spent some time tooling around in Spartan Assault (releasing this July for $6.99 on Windows 8 and Windows 8 Mobile) during a special event hosted by Microsoft, and while it never struck me as worthless, it’s far from exceptional. This Halo feels more like a vicarious thrill than an actual one.

That said, I’ve got to give full credit for the attention to detail. Elites rage when you pop their shields. Puny Grunts do the same spin-drop collapse when shot dead and run away when their nerves break. (Microsoft confirmed Brutes but did not show them.) You can pick up dropped weapons, jump into vehicles, and stick enemies with plasma grenades. Vehicles smoke when damaged. The sights and sounds are instantly familiar to any fan of the series, and Vanguard threw in an impressive depth of field as well. It all moves buttery smooth.

Those aren’t the only positives. Spartan Assault stars Sarah Palmer, the standout character from Halo 4’s Spartan Ops missions/movies, and rewinds the calendar to tell a bit of her backstory via fully animated cutscenes and five-stage missions. 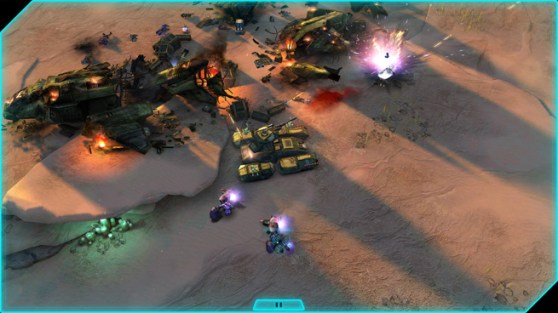 Like the best entries in the series, those stages change things up nicely. A Covenant splinter group has broken the ceasefire with Earth and unwisely attacked the moon that Palmer’s standing on. That initiates a series of very Halo-ish objectives. I started out on a cliffside platform, defending it against all comers with a few marine A.I. helpers. Like Halo 4, your mayhem earns Spartan Points. Spartan Assault converts them to credits that unlock new weapons and abilities. Naturally, you can buy those credits with real money.

Next, I led a small squad though a few corridor-canyons to take out objectives. Then it dropped me into a Scorpion tank (complete with passengers) to slowly wander a map looking for the last few Ghosts and Wraiths to bombard.

That’s when the limitations really start to peek out. The maps I saw lacked inspiration, and combat operates like a foregone conclusion. It just isn’t worthy of repetition.

From a conceptual approach, Vanguard didn’t move very far off its Gorilla Games roots. They’re the team responsible for the nicely gratuitous Gatling Gears, another twin-stick shooter with tougher multistage missions that played beautifully on Xbox Live Arcade, PlayStation Network, and PC. More accurately, it played beautifully with physical controls. Spartan Assault gets itself into the most trouble with its contextual touch controls.

Tight, smartly designed controls really did evolve the combat in the first Halo, and the updated control scheme for Reach made it even smarter. Spartan Assault’s virtual twin sticks materialize wherever your thumbs make contact with the touch screen — that’s a good thing. But they also try to move with you as your thumbs inevitably slide around, and that inevitably leads to serious control issues. Before long, it just couldn’t tell the difference between my thumbs drifting and my attempts to make a Spartan move around and shoot things.

Learning to manage both the tank’s machine gun and its revolving turret on one “stick” also required way too much patience. I overheard one developer mention how he couldn’t even remember how many different control styles they’d tested until they hit on this particular scheme. I don’t doubt it, but I do think they stopped looking too soon.

Watching another 343 rep play, I noticed he briefly lifted his thumbs to re-center the controls roughly ever three seconds. Nice trick, and it worked, but something seems wrong when you have to reset your inputs every few moments in order to make them work right.

Even with that strategy, aiming weapons tips too far toward trial-and-error, and throwing a grenade falls somewhere between guesswork and prayer. Melee attacks respond poorly to the double-tap input to the point of being pointless. Worse still, it locks grenades, armor abilities, and all pick-up/use functions to buttons on the edge of the screen; it’s impossible to do any of these things without stopping dead in your tracks, taking a hand off the tablet, finding the button, and touching it.

Picture doing that on an Xbox controller. 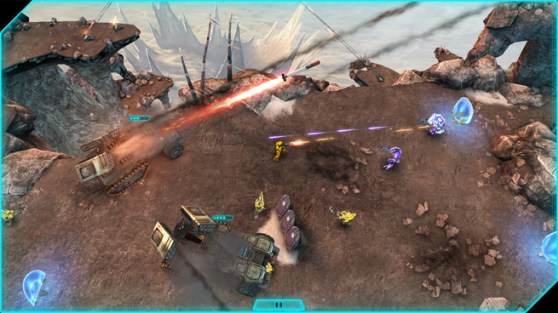 Even the story feels oddly removed. Spartan Assault presents it as a series of historical tactical simulations held aboard the UNSC Infinity, à la Halo 4’s War Games multiplayer. I’m not sure how this “It’s all a dream” approach can avoid bleeding all dramatic tension out of Spartan Assault, but I wish Vanguard the best of luck with it.

And indeed, a lot of those control issues might vanish on a PC … or when Vanguard patches in support for the Wired Xbox 360 controller on Windows 8 PCs, tablets and Surface sometime after launch. On top of that, Palmer’s a reliably entertaining presence when the writing backs her up, and I want to see more of her. She deserves her own vehicle.

Unfortunately, as-is, Halo: Spartan Assault is a vehicle without a reliable steering wheel. Putting “Halo” in the title raises the stakes considerably and invites a much more critical eye. This game has enough problems already; it suffers more for playing around in a franchise where expectations are so high. But a lot must happen — and I hope it does — before anyone can reasonably call this a Halo game.