Supercell is the maker of huge mobile games Clash of Clans, Boom Beach, and Hay Day, and it has another big hit on its hands. Clash Royale shot to No. 1 in top downloads on the app stores less than a day after its release.

Ilkka Paananen, CEO of Supercell in Helsinki, Finland, said on his Facebook page that he was happy to release Clash Royale, particularly after the company had killed so many other games. Supercell rigorously tests its games in certain markets before releasing them. One of them, Smash Land, was pretty far along in development when the company decided to kill it in mid-2015. That kind of religious focus on quality has earned the company some loyal followers, and it tells you a lot about why Clash Royale is so important in the $34.8 billion mobile game industry.

While other companies have just one or two hits, Supercell has now published four major games without the advantages of being a giant company or using huge brands. When SoftBank purchased a controlling stake in the company in June 2015, Supercell was valued at an astonishing $5.5 billion. Its success has spawned a lot of other mobile game startups in Helsinki, and everybody is chasing the company’s success. But Clash Royale shows that the company still has huge advantages, even as it remains a relatively small game studio.

It’s no wonder that Apple gave the game a huge feature position in the app store when it launched on Wednesday. Clash Royale is a blend of Clash of Clans, real-time strategy, and multiplayer online battle arena (MOBA) games such as League of Legends. But the blend itself makes for something uniquely addictive.

Clash Royale goes farther than Clash of Clans — which has asynchronous battles, where one online player attacks and an offline player defends — in going to synchronous, real-time combat. For this to function smoothly on mobile requires some huge infrastructure. I haven’t seen a hiccup yet in my battles against real players. It has a slight loading time at the beginning or end of a match.

You have a slate of characters that you can drop on the field and they start moving slowly toward the enemy’s defenses, which consist of two forts and a main castle. It has two lanes for combat, in contrast to five for typical MOBA games like League of Legends. The options for cards to play show up in the bottom of the screen. You get a choice of four. A “mana” meter runs along the bottom. If you have enough mana to play a card, it shows up in colors. If you don’t have enough, a timer that runs in real time shows you when it will be ready. When you are ready to play a card, you just press down on it and move it to the right part of the screen where you want it to appear. That’s all you are required to do. That makes the gameplay repetitive and simple. You just have to think fast.

Where the variety comes in 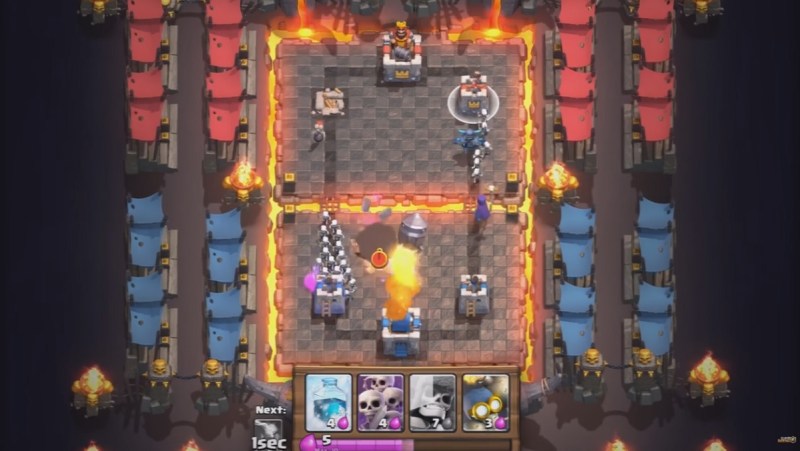 After each battle, you get a reward of a chest. A small wooden chest usually yields poor loot. But silver or gold chests release better stuff. It takes 15 seconds to open a wood chest. But it takes three hours to open a silver one and eight hours for a gold chest. You get better loot, but if you want to speed up the opening time, you have to spend gems, and those gems can either be earned in combat or purchased with real money. Those gems are the reason that Clash Royale has already hit No. 4 on the top-grossing list on the U.S. app store.

There’s strategy in figuring out which units you want to appear in your deck of eight cards. You can upgrade units with gems so they become more powerful. If you choose wisely, you’ll outgun the enemy when you toss your units onto the field. If you’re wondering what units to upgrade, you can just look at your enemy’s deck and find out what they’re playing. I liked the witch, which can attack or defend, as well as the dragon, an aerial unit that can attack or defend and is not vulnerable to ground units such as knights or goblins. And the giant is great when you need to pound something.

Will it get boring?

Clash Royale meets a lot of tests of being a pure mobile game. You can play it while waiting in a line for coffee. It is easy to learn, you play against real people, and you can learn it in just a couple of tutorial sessions. It’s easy to learn and hard to master.

But that simplicity may bore you after a while. To counter that, I expect that Supercell will have a lot of options to expand the game over time. It can add more cards, which makes the game more complicated. And it has clans, which let players band together in groups for some higher purpose. You can unlock new arenas like the Barbarian Bowl. I can foresee an endless progression over time. 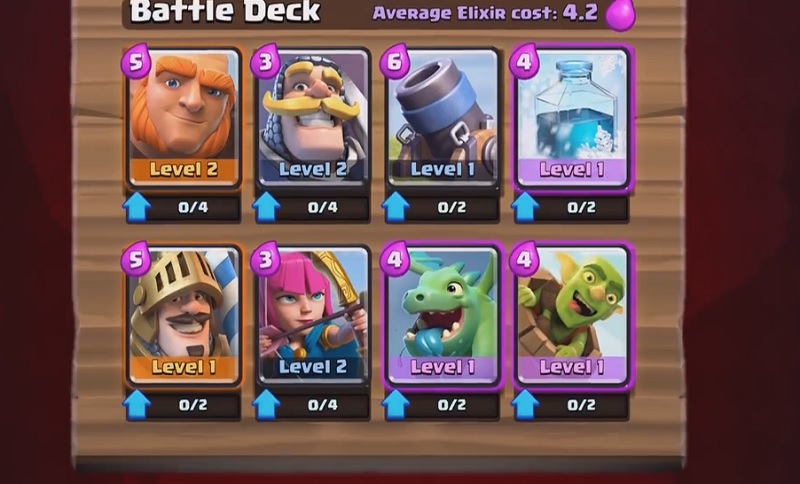 Above: Clash Royale gives you choices for your deck.

Clash Royale is clearly addictive at the outset. It’s easy to learn. Now we’ll find out just how long it lasts.

Lots of games that have shot to the top of the app store and fallen almost as quickly. But Supercell has created a game that is already competitive and a lot of fun for both hardcore gamers and nongamers alike. In fact, the game meets the growing requirement for mobile gamers. I sense that players want real gameplay that matches the experience they can get on other serious gaming platforms. And mobile game platforms can finally support this real-time gameplay. You can expect Clash Royale to have a lot of influence on the market, and a lot of other new kinds of game experiences to be inspired by it.

You can also expect to see Supercell unleash its advertising budget, fueled by the success of its past games.